Yves here. Bad enough having to worry about offshoring eating into your employment prospects and compensation level. Alan Blinder, in Senate testimony in 2007, had argued that up to 29% of US jobs were “offshorable,” including many service industry positions. And now this….

From Unconventional Economist, who has previously worked at the Australian Treasury, Victorian Treasury and Goldman Sachs. Cross posted from MacroBusiness

Computers and improvements in technology have long been an important part of many industries and have already replaced humans in many jobs (think typists and bank tellers). However, a whole new wave of technological development means that even positions once thought to be safe from computerisation are now under threat.

Across developed economies, low income service jobs have expanded sharply at the expense of middle-income manufacturing and production jobs. At the same time, computers have increased the productivity of higher income workers – including professional managers, engineers and consultants – resulting in a polarised labour force, with rising wage inequality and the “hollowing-out” of the middle class.

To date, the threat from computerisation has been limited more to routine manufacturing jobs, such as production line workers. However, advancements in technology, which is extending robotics beyond simple routine-based tasks to dynamic problem solving, has raised the prospect that higher order jobs might soon be under threat.

Take, for example, the autonomous driverless cars under development by Google. They are a prime example of a how a human worker, such as long-haul truck and taxi drivers, could soon be replaced by machines – just like a scene from the 1990s futuristic movie Total Recall or the 2000s film Artificial Intelligence.

Over the weekend, The Economist released a list of jobs that it believes are most at risk from computerisation (see below). 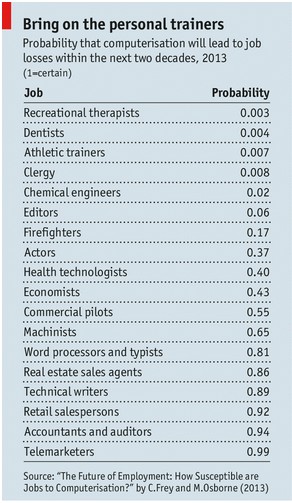 Accountants, economists, pilots, retailers – none of them are safe. Algorithms for big data are now entering domains reliant upon pattern recognition and can readily substitute for labour in a wide range of non-routine cognitive tasks. Many service occupations – from fast food counter attendants to medical transcriptionists – which have been a key driver of jobs growth over past decades, are now in the line of fire.

As for the implications of mass robotics, The Economist believes that it will make society as a whole wealthier, but not without major turmoil:

There is already a long-term trend towards lower levels of employment in some rich countries. The proportion of American adults participating in the labour force recently hit its lowest level since 1978, and although some of that is due to the effects of ageing, some is not. In a recent speech that was modelled in part on Keynes’s “Possibilities”, Larry Summers, a former American treasury secretary, looked at employment trends among American men between 25 and 54. In the 1960s only one in 20 of those men was not working. According to Mr Summers’s extrapolations, in ten years the number could be one in seven.

This is one indication, Mr Summers says, that technical change is increasingly taking the form of “capital that effectively substitutes for labour”…

The machines are not just cleverer, they also have access to far more data. The combination of big data and smart machines will take over some occupations wholesale; in others it will allow firms to do more with fewer workers. Text-mining programs will displace professional jobs in legal services. Biopsies will be analysed more efficiently by image-processing software than lab technicians. Accountants may follow travel agents and tellers into the unemployment line as tax software improves. Machines are already turning basic sports results and financial data into good-enough news stories.

Jobs that are not easily automated may still be transformed. New data-processing technology could break “cognitive” jobs down into smaller and smaller tasks. As well as opening the way to eventual automation this could reduce the satisfaction from such work, just as the satisfaction of making things was reduced by deskilling and interchangeable parts in the 19th century. If such jobs persist, they may engage Mr Graeber’s “bullshit” detector…

The potential for dramatic change is clear. A future of widespread technological unemployment is harder for many to accept. Every great period of innovation has produced its share of labour-market doomsayers, but technological progress has never previously failed to generate new employment opportunities…

If you are young person seeking a career, you would be well advised to begin looking at these new trends and studying The Economist’s article in detail.