Lambert here: “Twenty years of schoolin’ and they put you on the day shift.” –Bob Dylan. Of course, that’s oldthink. Back in the day, they had shifts. Real wages have been flat for thirty years. Seriously, are we to believe that economists and the elites they service just got around to noticing? Pas si bête.

Employment in traditional middle-class jobs has fallen sharply over the last few decades. At the same time, middle-class wages have been stagnant. This column reviews recent research on job polarisation and presents a new study that explicitly links job polarisation with the changes in workers’ wages. Job polarisation has a substantial negative effect on middle-skill workers.

The decline of the middle class has come to the forefront of debate in the US and Europe in recent years. This decline has two important components in the labour market. First, the number of well-paid middle-skill jobs in manufacturing and clerical occupations has decreased substantially since the mid-1980s. Second, the relative earnings for workers around the median of the wage distribution dropped over the same period, leaving them with hardly any real wage gains in nearly 30 years.

Job polarisation and its cause

Pioneering research by Autor, Katz, and Kearney (2006), Goos and Manning (2007), and Goos, Manning, and Salomons (2009) found that the share of employment in occupations in the middle of the skill distribution has declined rapidly in the US and Europe. At the same time the share of employment at the upper and lower ends of the occupational skill distribution has increased substantially. Goos and Manning termed this phenomenon “job polarisation” and it is depicted for US workers in Figure 1.

Figure 1. Changes in US employment shares by occupations since the end of the 1980s 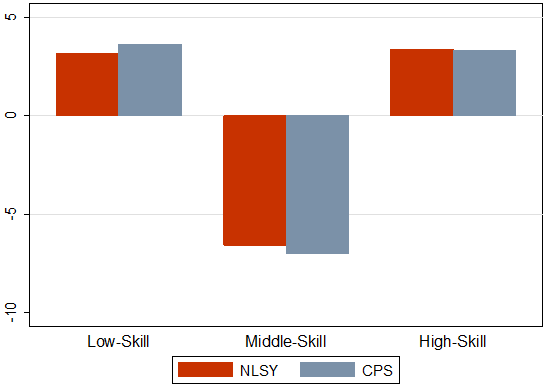 In an influential paper, Autor, Levy, and Murnane (2003) provide a compelling explanation: they found that middle-skilled manufacturing and clerical occupations are characterised by a high intensity of procedural, rule-based activities which they call “routine tasks”. As it happens, these routine tasks can relatively easily be coded into computer programs.

Therefore, the rapid improvements in computer technology over the last few decades have provided employers with ever cheaper machines that can replace humans in many middle-skilled activities such as bookkeeping, clerical work and repetitive production tasks. These improvements in technology also enable employers to offshore some of the routine tasks that cannot be directly replaced by machines (Autor 2010).

Moreover, cheaper routine tasks provided by machines complement the non-routine abstract tasks that are intensively carried out in high-skill occupations. For example, data processing computer programs strongly increased the productivity of highly-skilled professionals. Machines also do not seem to substitute for the non-routine manual tasks that are intensively carried out in low-skill occupations. For example, computers and robots are still much less capable of driving taxis and cleaning offices than humans. Thus, the relative economy-wide demand for middle-skill routine occupations has declined substantially.

This routinisation hypothesis, due to Autor, Levy, and Murnance, has been tested in many different settings and it is widely accepted as the main driving force of job polarisation.

The effect of job polarisation on wages

Around the same time as job polarisation gathered steam in the US, the distribution of wages started polarising as well. That is, real wages for middle-class workers stagnated while earnings of the lowest and the highest percentiles of the wage distribution increased. This is depicted in Figure 2.

Figure 2. Percentage growth of the quantiles of the US wage distribution since the end of the 1980s 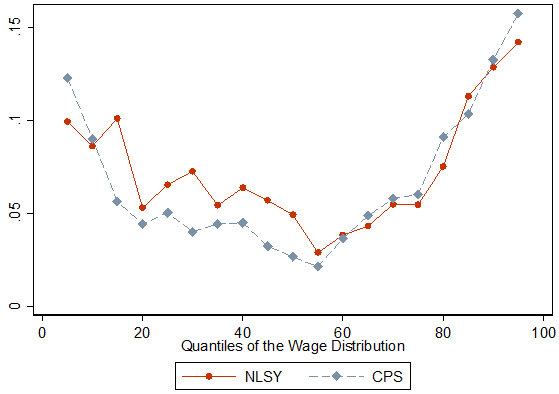 Notes: The chart depicts the change in log real wages along the quantiles of the wage distribution between the two cohorts for the NLSY and the comparable years and age group in the CPS.

It thus seems natural to think that the polarisation of wages is just another consequence of the declining demand for routine tasks. However, there exists some evidence that is not entirely consistent with this thought: virtually all European countries experienced job polarisation as well, yet most of them haven’t seen wage polarisation but rather a continued increase in inequality across the board. Moreover, other factors that may have generated wage polarisation in the US have been proposed (e.g. an increase in the minimum wage, de-unionisation, and ‘classical’ skill-biased technical change).

In my recent paper I try to establish a closer link between job polarisation and workers’ wages (Boehm 2013). In particular, I ask three interrelated questions:

I answer these questions by analysing two waves of a representative survey of teenagers in the US carried out in 1979 and 1997. The survey responses provide detailed and multidimensional characteristics of these young people that influence their occupational choices and wages when they are 27 years old in the end of the 1980s and the end of the 2000s.

I find similar results when controlling for college education, which is arguably a measure of absolute skill. This suggests that it is indeed the relative advantage in the middle-skill occupations for which the returns in the labour market have declined.

Figure 3. Actual and counterfactual changes in the US wage distribution 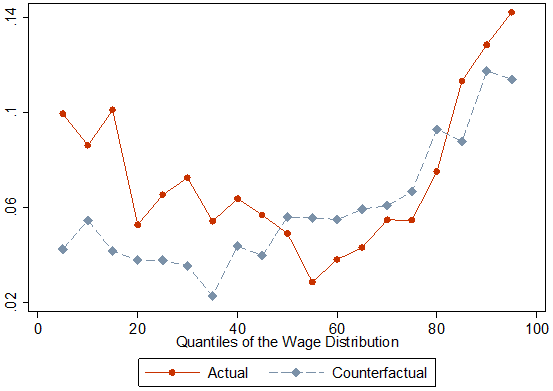 Notes: The chart plots the actual and counterfactual changes in the wage distribution in the NLSY when workers in 1980s are assigned the estimated price changes in their occupations.

At first glance, this is surprising given the strong increase in relative wage rates for low-skill work and the increase in the wages of workers in low-skill occupations. The reason is that these workers now move up in the wage distribution, which lifts not only the (low) quantiles where they started out but also the (middle) quantiles where they end up. The inverse happens for workers in middle-skill occupations but with the same effect on the wage distribution.

Despite the above findings, my paper does not provide the last word about the effect of job polarisation on the bottom of the wage distribution. This is because, for example, my estimates do not take into account potential additional wage effects from workers moving out of the middle-skill occupations into low-skill occupations. Therefore, we cannot yet finally assess the role that job polarisation versus policy factors (such as the raise of the minimum wage) played on the lower part of the wage distribution in the US.

However, what emerges unambiguously from my work is that routinisation has not only replaced middle-skill workers’ jobs but also strongly decreased their relative wages. Policymakers who intend to counteract these developments may want to consider the supply side: if there are investments in education and training that help low and middle earners to catch up with high earners in terms of skills, this will also slow down or even reverse the increasing divergence of wages between those groups. In my view, the rising number of programs that try to tackle early inequalities in skill formation are therefore well-motivated from a routinisation-perspective.

Acemoglu, D and D H Autor (2011), “Skills, Tasks and Technologies: Implications for Employment and Earnings”, in Handbook of Labor Economics edited by Orley Ashenfelter and David Card, Vol. 4B, Ch. 12, 1043-1171.

Autor, D H (2010), “The polarization of job opportunities in the US labour market: Implications for employment and earnings”, Center for American Progress and The Hamilton Project.

Goos M, A Manning and A Salomons (2009), “Explaining Job Polarization in Europe: The Roles of Technology, Globalization and Institutions”, American Economic Review Papers and Proceedings 99(2): 58-63

1 This figure and the ones below are based on two representative samples for 27 year old males in the United States (the National Longitudinal Survey of Youth (NLSY) and the Current Population Survey (CPS)). For qualitatively similar statistics on all prime age workers, refer to Acemoglu & Autor (2011).

2 Examples of tests of the routinization hypothesis include Michaels et al (2013) who find that industries with faster growth of information and communication technology had greater decreases in the relative demand for middle educated workers; Spitz-Oener (2006) who shows that job tasks have become more complex in occupations that rapidly computerized; and Autor and Dorn (2013) who show that local labour markets that specialised in routine tasks adopted information technology faster and experienced stronger job polarisation.

3 For the details of this estimation, please refer to the paper.