You cannot make this stuff up. Reader Chris kindly sent this snapshot from a Google search: 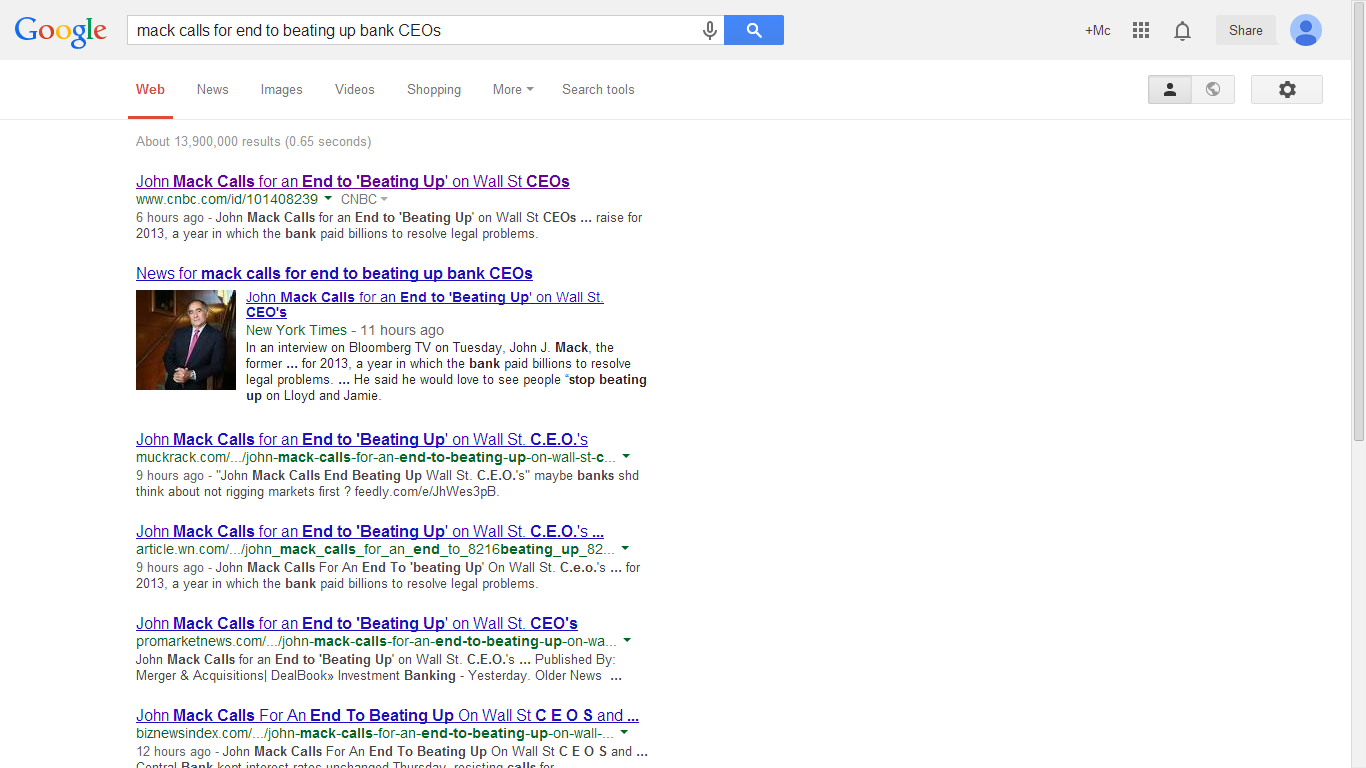 The interview that produced these headlines below:

The CNBC story flags the inflammatory portion, which starts at 5:23:

He [Mack] said he would love to see people “stop beating up on Lloyd and Jamie.” He added: “I think that would make a lot of sense, and I’m in favor of that.”

He said a debate over compensation was necessary and “healthy,” but he emphasized that chief executives should be judged according to their companies’ performance.

Robert Peston, today writing about Barclays, by happenstance rebutted Mack’s efforts to off brush the fact that the leader of the banks that drove the global economy off the cliff were still employed at lavish pay levels:

The problem is that there is blank incomprehension from those not in the industry that the going rate remains so high for people widely seen as being more than walk-ons in the epic near-destruction of global financial capitalism just a short while ago.

The worst is that Mack and other members of his class (elite financiers and the 0.1%) really don’t get it. They live in such a cloistered world that the fact that they’ve gotten away with abject incompetence, malfeasance, and in the case of JP Morgan, almost certain criminal conduct (among other things, as we have discussed in considerable detail, Sarbanes Oxley violations and the criminal case that the DoJ settled rather than prosecuted), according to Mack, is perfectly kosher if investors don’t mind. And why should investors mind? Last I checked, crime and predatory conduct are very lucrative businesses if you can get away with it.

In fact, it’s even worse than that. Andrew Haldane, the executive director of stability at the Bank of England, did a simple analysis that demonstrated that banks couldn’t even begin to pay for the damage they did to society as a whole via periodic financial crises that result in the loss of jobs and the destruction of savings. That means the financial services industry as now constituted is negative value added from a societal perspective. It is purely extractive. Any reforms that reduce its ability to do damage would be hugely productive. But those are precisely the sort of reforms that badly captured governments and cowardly or corrupt regulators have refused to implement.

Similarly, Mack’s argument presupposes that large financial firms should enjoy the freedom of private enterprises. But as the crisis demonstrated, banks get far in the way of government subsidies and support than any other industry. They cannot properly be considered to be private enterprises and should be regulated like utilities.

These banks have thumbed their noses at the public, when they’d be dead without taxpayer bailouts and the continued taxes on savers known as ZIRP and QE, by paying themselves supersized bonuses rather than building capital levels, or even better, curbing the worst conduct. But having the Obama administration firmly in their camp, despite the occasional wet-noodle lashing, means they can tell themselves since no one has seen fit to punish them, clearly they did nothing wrong.

All we’ve done, as the continued whining of our top elites proves, is that like spoiled children, they’d become insatiable ids of more demands and more and more reckless conduct. And until someone finds a way to cut their grandiosity and their privileges down to size to discipline them or the bank CEOs manage to break the global economy beyond repair, they will have the bad taste to not only continue looting, but to add insult to injury, keep insisting that we serfs really should think and talk more respectfully about them.