Yves here. Some savvy investors were warning the single family home rental market was overheated nearly a year ago. Carrington, one of the early entrants, said it had pulled back last May, largely because “stupid money” had flooded the market.

In a recent post, readers confirmed that private equity investors are, not surprisingly, taking a very short-sighted posture towards their investments in single-family homes. It’s not uncommon for them to list well above-market rent rates and include unrealistically low levels of reinvestment in their projections. But sweating an asset works only if you’ve got an exit strategy. As we indicated, the cleanest and simplest one, that of doing an IPO of the operating company, appears to no longer be viable, thanks to the Fed’s taper. A few deals got launched, then one was pulled, as it seems the PE landlords can’t get the pricing they want via this route. Another that Wall Street was very keen to establish was that of securtizing the rental stream (a prospect your truly regards with horror, since if mortgage servicers were terrible, I shudder to think what the property management will be like in these deals). But with Blackstone’s first rental securitization showing a nearly 8% fall in rental income shortly after it was launched, the bloom may be off that rose as well.

In real estate, national averages paper over the gritty details on the ground and are a crummy, often contradictory indicator as to what is happening in specific metro areas. When a new trend starts or when a reversal takes place in some locations, it’s watered down by data from other unaffected locations to form the overall averages. But even with this caveat, a national average suddenly sounded an alarm for the housing market: the smart money has started to bail out.

The smart money entered the housing market gingerly in 2011 then piled in helter-skelter over the next two years, gobbling up vacant single-family homes out of foreclosure. The forays were funded by Wall Street, awash in the Fed’s crazy-money. The smart-money operators trained their guns on specific markets, such as Phoenix and Las Vegas, and bought homes by the thousands that they tried to rent out. Then they spread their campaigns to other cities.

The tally has reached 200,000 single-family vacant homes for which they’re now trying to find tenants. In the process, mega-landlords have emerged. On top of the heap: Invitation Homes, a unit of private-equity giant Blackstone Group, and American Homes 4 Rent, a highly leveraged REIT that went public last August.

As in the heyday before the financial crisis, their smartest minds are now feverishly at work trying to figure out how to shuffle risks and future losses off to yield-desperate investors who’ve been driven to near-insanity by the Fed’s relentless repression of interest rates. So Blackstone and American Homes 4 Rent have started selling synthetic structured securities that are backed, not by mortgages, like the toxic waste before the financial crisis, but by something even classier, rental payments – based on the rickety hope that these single-family homes will stay rented out. Wall Street is already jubilating: the market for this type of synthetic monster is estimated to be $1.5 trillion [read…. The Exquisitely Reengineered Frankenstein Housing Monster].

But now the party appears to be running out of booze. This frantic institutional buying has driven up home prices – in some areas above the levels of the prior bubble. Trying to make money by buying these homes at inflated prices and renting them out into a tough job market where strung-out consumers with declining real wages have trouble making ends meet has become a precarious business model.

In some of the formerly hottest metro areas, purchases by large institutional investors – those having bought at least 10 properties over the past 12 months – plunged in January from a year ago, according to RealtyTrac’s Residential & Foreclosure Sales Report: in Jacksonville, Florida, by 21%; in Tampa, by 48%; in Tucson, 59%; Memphis, 64%; in Cape Coral-Fort Myers, Florida, by 70%!

Institutional purchases hit the skids in over three-quarters of the 101 metro areas that RealtyTrac analyzed, their share dropping to 5.2% overall, from 7.9% in December, and from 8.2% in January 2013. It was the lowest monthly share since March 2012, at the infancy of this whole bonanza. 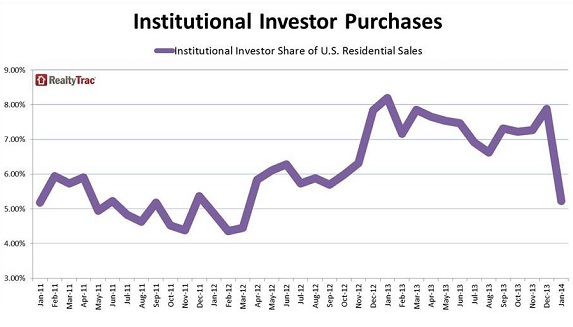 But 23 of the 101 metro areas had year-over-year gains, some of them late starters. In Atlanta, institutional purchases rose 9% to where a quarter of all homes were purchased by institutional investors. That’s how the Fed has “fixed” the housing market. In Austin, the institutional share soared by a mind-boggling 162% to reach nearly a fifth of all purchases. In Denver, their share rose 21%, in Dallas 30%.

And in Cincinnati 83%. “Big hedge fund investors,” explained Michael Mahon, Executive Vice President at HER Realtors, which covers the area. “I think that’s contributing to the lower levels of inventory available on the market,” he added, seeing how these vacant homes have been pushed from the much scrutinized for-sale listings to the ignored for-rent listings.

So forget the by now ubiquitous all-encompassing polar-vortex explanation. Which begs the question: if not institutional investors, who the heck is going to buy these homes at these prices?

Existing homeowners who buy a home and sell their old home don’t count. They’re just swapping homes, not creating demand. But foreigners are buying in certain cities – Chinese and Argentine buyers and others who want to deposit their wealth while they still can in a reasonably safe place. So they’re creating demand.

But the most powerful economic force in the housing market, first-time buyers? Normally, they’d swarm all over these homes and create real and lasting demand and make the housing market grow. But prices have soared, and mortgage rates have crept up, and young people are teetering under piles of student loans, and so that economic force has collapsed to record low levels. Read…. Without Them, The Housing ‘Recovery’ Remains A Sham