The Congressional Progressive Caucus (CPC) recently issued its “Better Off Budget” document as an alternative to the White House/OMB document, and the coming House budget document, a Republican/conservative alternative. The “Better Off Budget” has received enthusiastic evaluations from writers affiliated with the DC progressive community. Richard Eskow’s recent treatment is typical and provides other reviews that are laudatory. These “progressives” clearly see the CPC budget as anything but an austerity budget. But is it, or is it not?

Recently I posted an analysis of the White House OMB budget showing that it was a budget that brought the nation close to a macroeconomic austerity at best stagnation, and at worst recession or depression situation over the next decade. My analysis used the Sector Financial Balances (SFB) model and some estimates based on related data to reach that conclusion. I also pointed out that projected private sector aggregate savings were so small due to the OMB budget, that, if the Government succeeded in implementing it, was very likely to cause severe microeconomic austerity for working and middle class people with a longer term result that would accentuate economic inequality in America due to the power of large corporations and the FIRE sector to monopolize the savings left to the private sector by the Government’s very low deficit budgets over the period 2015 – 2024. Later we’ll see how the CPC budget looks from the point of view of the SFBs that would result if its budgets were carried through as projected. But first let’s review the SFB approach and its application to the idea of austerity.

The Sector Financial Balances (SFB) model is an accounting identity, and these are always true by definition alone. The SFB model says:

Now let’s think about austerity. From the perspective of the SFB model, government macroeconomic austerity is medium to long-term fiscal policy characterized by a focus on reducing budget deficits, or increasing budget surpluses, and mostly on the former in today’s environment where many nations have trade deficits. In addition, it involves destroying private sector net financial assets by cutting government spending and/or raising taxes in such a way that Government additions of net financial assets to the non-government portions of the economy (government deficits) fall to a level low enough (even becoming government surpluses) that they are less than the size of the trade balance, whether in deficit or in surplus.

Issues of distribution of financial flows cut deeply here. If a nation’s economy is structured so that some parts of the foreign sector and some parts of the private sector have sufficient economic and political power to direct financial flows from outside and inside the sector disproportionately into their coffers, then macroeconomic austerity may translate into microeconomic prosperity for those sub-sectors, and into disproportionate microeconomic austerity for the sub-sectors with lesser economic and political power.

Here are the projections based on the OMB 2015 budget recently published by the White House, the CPC Better Off Budget and on quarterly time series data kindly provided in Spreadsheet format by Professors Scott Fullwiler and Stephanie Kelton. 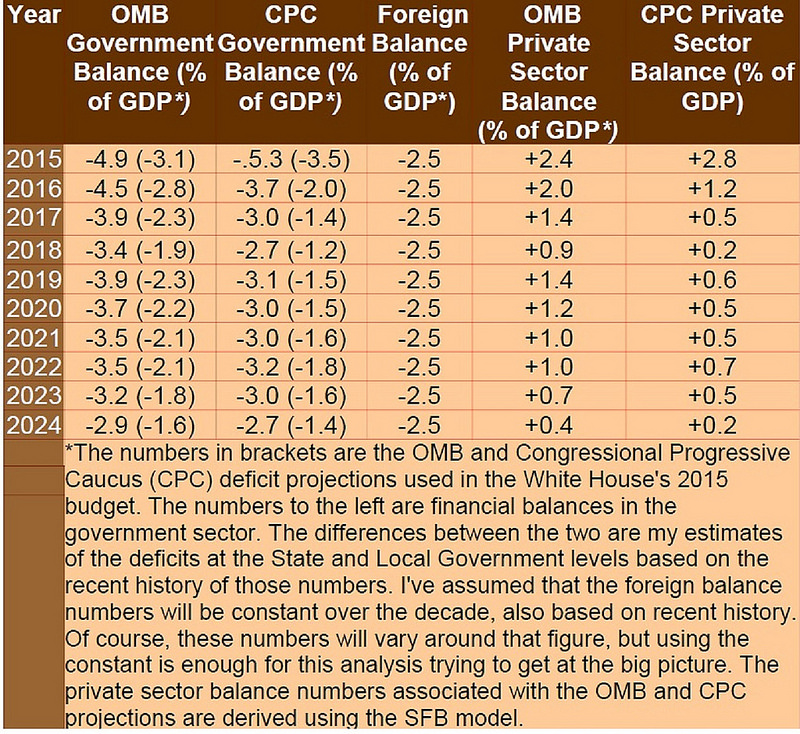 Table One shows that the decade 2015 – 2024 has very small domestic private surpluses projected for both the OMB and CPC budgets. The mean annual projected private surplus (aggregate) savings over the decade period is 1.2 % of GDP for the OMB budget and 0.7 for the CPC budget. This is not macroeconomic austerity, but throughout the decade the projections are getting closer and closer to that for both budgets.

Compare that figure to the mean of approximately 7.2% of GDP for the 6 year post-crash period of fiscal 2009 – 2014. Consider also that Government injections resulting in an annual average private sector surplus of 7.2% of GDP over that period haven’t created enough aggregate demand to produce a strong economy with rapid job creation, full employment and widespread prosperity. Instead, these surpluses have only been enough to end the recession and produce a slowly growing stagnant economy, whose rewards are vast for the already wealthy and for large corporations, but are miniscule or non-existent for everyone else. And then ask yourself the question of what the result of the projected small Government deficits over the next decade in the two 2015 budget projections, resulting in mean annual private sector savings of 1.2% of GDP in the OMB case and 0.8% of GDP in the CPC case are likely to do to the economy?

My answer is that both the President’s and the CPC’s budget plans, if either were enacted and followed, would first produce microeconomic austerity for the 99% with flat or shrinking aggregate demand, and then continued and exacerbated economic stagnation compared to what we’ve seen in past years. We will also see rapidly increasing economic inequality, resulting eventually in renewed recession whose time frame would be determined by the willingness of the private sector to extend credit to increasingly hard-pressed consumers and small businesspersons.

The bottom line is that microeconomic austerity in the United States won’t end if either the President’s budget or the CPC’s or others like them, or even more tight-fisted, are enacted. But, on the contrary, such budgets will mark the beginning of severe microeconomic austerity in the United States leading to even more severe suffering than we’ve experienced so far and to social turmoil and political unrest.

But, but, but . . . What about the claims made by the CPC for its budget? And what about the analysis of it by that redoubtable progressive icon the Economic Policy Institute (EPI)? I’ll consider these claims in more detail in a future post. But the important point is that the analysis by the CPC and the progressive organizations don’t sufficiently take into account the macroeconomic constraints imposed by the planned levels of deficit reduction.

The CPC story really begins in 2014 rather than 2015. CPC assumes passage of its budget in short order so that increased deficit spending over the 2013 level would stimulate the economy and lower the unemployment rate substantially during 2014. This is supposed to happen with total Government deficit spending, both State and Federal of about 7.0% (CPC’s specific projection is that the Federal component of the deficit would rise to 5.2% for 2014). Applying SFB considerations and assuming that the trade deficit rises to 2.65% which is where it was at the last time the total deficit was just a bit over 7%, that leaves private sector aggregate savings of 4.4% to boost demand.

First, the lower the rate of unemployment, the more difficult it is to reduce it further without increasing the aggregate private sector savings rate, in the absence of a credit bubble supporting increased investment. And second, as more new jobs appear more and more people who withdrew from the labor force, causing that sharp drop in the unemployment rate in 2013, will re-enter it and make the resistance to further reduction in the U-3 unemployment rate greater than ever. The result could well be that the labor participation rate increases toward pre-recession levels, but the U-3 unemployment rate could well remain in the neighborhood of 6.2% rather than falling further, leaving the US with a still substantial output gap, even if one assumes that full employment is 5.5% (which is a very austerian assumption to make in the first place).

So, it is likely that even if the CPC got its way, the US would enter 2015 with relatively high unemployment, but at that point the CPC plan calls for a Government deficit of 3.5%. According to table one that will correspond to private sector aggregate savings of 2.8%, and that is not enough savings to support aggregate demand sufficient for the private sector to add jobs without a credit bubble of the kind we saw during the Clinton Administration, and later, the Bush 43 Administration.

As we move through the decade beginning in 2015 moreover, the private sector aggregate savings level very quickly will decline to a fraction of a percent annually. That kind of savings level won’t support sustainable job growth however, and CPC projections about decreasing unemployment over the decade will not come to pass. What’s even worse is that the smaller the deficit is forced to go, the less support for job growth will exist, and certainly within the 2015 – 20124 decade the increase microeconomic austerity will cause another recession, if not another Great Recession or a depression.

None of the deficit and debt terrorism and miserly fiscal policy reflected in these budgets are necessary, because there is no shortage of Federal fiscal capacity in the United States, and no justification for the fiscal policies the US Government has followed since the Recovery Act was passed in 2009. To end austerity, the Federal Government needs to budget to create full employment and benefits for most Americans, including solutions for the major problems facing the US, while letting the trade and budget deficits float.

First create full employment through various programs, including a Federal Job Guarantee to get and keep the employment level there. And then, let the twin deficits float until we’re at that point. A policy like this one adjusts to the savings and trade balance desires of Americans, while creating full employment, with whatever government deficit spending is necessary to accommodate those needs.

That’s how you end austerity for most people without causing demand pull inflation, or cost-push inflation. The second of these may occur because of developments in commodity markets that have nothing to do with Government employment or safety net programs. But that is a story for another day, unrelated to austerity and its remedy.