The real problem is that there are too many people on the planet right now. All these people need to eat and sleep somewhere and all want to use energy and aspire to have a great lifestyle. So to me the solution would be that people should decide to have fewer children. This is the only long term solution that is going to work.

To which commenter banger responds:

Since I have lived in places where there is very low energy consumption I don’t agree that there are too many people–there are too many Americans. It is possible to live in a sustainable and even happier way with more or less the current population but the carbon barons don’t want that. Lowering population is the way the oligarchs intend to go with all this–they will choose who lives and who dies or so they appear to believe.

Yes, and then they’ll rocket off to Mars! Anyhow, since I’m feeling the approach of spring, I want to avoid the “too many people” claim here, especially because, whether gleeful, ghoulish, or sadly necessary slash inevitable, talk like that feels way too much like eugenics or genocide for me to be comfortable deploying it; too much like “exterminate all the brutes.” Call me Pollyanna!

Of course, there are many scenarios to solve the “too many people” problem, like “Five Ways to Kill a Man,” but in bulk: Supply chain collapse, shortening life expectancy for the unterbussen, pandemic, nuclear war, and one might even (rationally) believe the elites are managing that entire portfolio, but in this post I want to consider the old-fashioned Malthusian catastrophe: Famine. Is a human, planetary dieback from famine inevitable or necessary, if we assume the end of petroleum-based agriculture? Even if the carbon barons have a sad, a naive back-of-the-envelope calculation shows no.

I’ll begin by deviating sharply from Naked Capitalism’s austere policy on graphics to present an image of my friend’s garden: 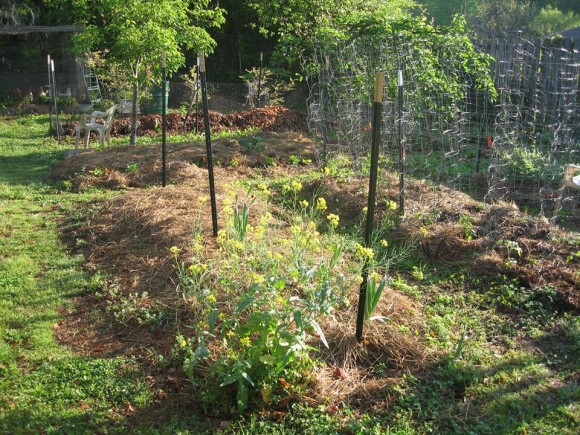 Last year, completely organic, we got > 600 pounds of cherry and big tomatoes combined by actual weight. Weighted them everyday after harvesting. Hoping for another good year! It is really nice to go out at lunchtime and pick 8 to 10 ounces of tomatoes for your personal salad!

Now, it is true that not all the materiel originates on the property: Straw, mulch, the climbing structures for the tomatoes, fencing, and seeds are brought in from elsewhere. And tools. And the chair. And there’s garbage pickup, a public water system, the Internet. So although my friend’s patch is highly productive, it’s not self-sufficient. (Should it be?) Nevertheless, one returns to that statistic: 600 pounds of tomatoes or so. So assume 3 tomatoes per pound, and 3 tomatoes a day, that’s 200 days of eating for one person from a quarter acre patch, and that’s before we get to the rest of the garden, or the chickens. That’s not so far from feeding one person for a year.

My own experience is more or less the same; although I’m a lazy gardener — I prefer to sit in the garden, not work in it (I don’t like work) — but even so I grow around thirty winter squash, sufficient for two months eating, especially with butter and salt (and a heat source). With work, I could feed myself, for a year — assuming in my climate, preservation — on about an eighth of an acre.

And we three are not alone. David Blume writes:

On approximately two acres— half of which was on a terraced 35 degree slope—I produced enough food to feed more than 300 people (with a peak of 450 people at one point), 49 weeks a year in my fully organic CSA on the edge of Silicon Valley . If I could do it there you can do it anywhere.

My point is not that everybody gets yields like this, but that yields like this are not exceptional. Do they take place on a larger, continental scale? Yes. Sharashkin, Gold, and Barham, “Sustainable Growing Practices in Russia,” University of Missouri – Columbia:

In Russia, microscale ecofarming is an extremely widespread, time – tested practice. Despite the minuscule size (600 m 2 ) of individual plots and absence of machinery, cultivators have demonstrated exceptional productivity, producing more potatoes, vegetables, berries, fruit, milk, and meat than commercial agriculture’s output of these products. Currently, with 35 million families (70% of Russia’s population) working 8 million [hectares] of land and producing more than 40% of Russia’s agricultural output, this is in all likelihood the most extensive microscale food production practice in any industrially developed nation.

So, 35 million into 8 million hectares is a bit less than a quarter hectare per patch, or an eighth of an acre (my size). And they get very good yield. (These numbers also suggest that my friend, David Bruce, and I are in no way exceptionally skilled.)

So, do these numbers scale up globally? On the back of the envelope, they do. From Prairie Soils & Crops Journal [PDF]:

In July 2009, the world population reached 6.790 billion and the global arable land area is estimated as 1.351 billion hectares (3.339 billion acres). This implies that arable land per capita on a global basis is 0.20 hectares per person (0.49 acres per person).

So, if Big Oil and Big Ag vanished from the face of the earth tomorrow — as perhaps, for the sake of mitigating climate change, they should do — we at least have the arable land to support 6.790 billion of us, on the back of the envelope; and if we consider I could support myself on 0.125 acres, and the Russian yields come with a growing season of around three months, we could have considerable margin. (See also here, here, and here.)

At this point, I should concede that “But I said back of the envelope!” can’t wave away all objections, and so I’ll deal with a few I can think of.

First, arable land is by no means evenly distributed: 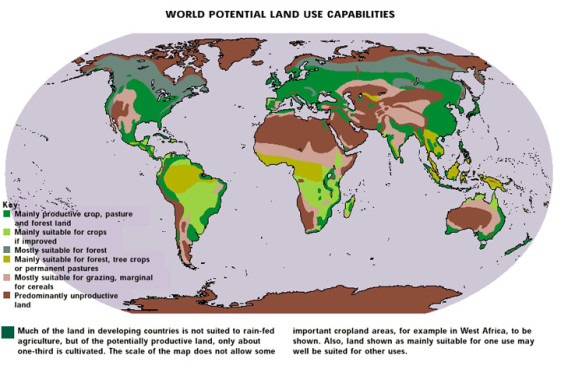 To which I would respond that most future disaster scenarios assume migration, so why not assume migrations whose end point is one’s own patch of land? I’d also point out that arable doesn’t include forests, but we are also familiar with the concept of edible forests, and so, over time, there are not only many more places to settle than the map above would imply, we have even more margin for our per capita calculations.

Second, what about Manhattan? What about it?

Blume points out that even without modern permaculture techniques, the city of New York, with over one million people, met all its food needs from within seven miles prior to 1850.

Third, vast changes in political economy would be required for such a system of horticulture to come into place. To which I would respond Yes, and your point? This passage on Jefferson highlights the opportunities and dangers:

The Jeffersonian ideal of stewardship, rooted in a contractual relation of a responsible servicing of the land, rested on “good practices” of land management through rational skills of crop rotation, terracing to prevent soil erosion, promoting the diversification of varied crops, and surveying of land, from advocating a regular seven-year cycle of regular crop rotation that follow corn and wheat with a variety of crops, including turnips, clover, vetch and buckwheat. He pioneered innovations that would increase the conservation of resources as well as crop yield, including deep contour plowing, turning the ground far beneath the topsoil, and terracing to prevent soil erosion. And his quest for variety and diversity for the agriculturalist no doubt encouraged him to introduce eggplants, brussels sprouts, rice, chestnuts, cauliflower, nuts and olive plants to the country–Jefferson imported 170 different fruits and 330 vegetables in the period from 1767 to 1824 to diversify the nation’s agriculture. Jefferson was vigilant in advocacy of agricultural stewardship and famously wrote Washington with dismay in 1793 that “we can buy an acre of new land cheaper than we can manure an old one.”

And speaking of manure, Jefferson’s “ideal of stewardship” was also “rooted in” chattel slavery, of which he was a “vigilant” advocate, and his “innovations” were powered by the coffle. So we’d have to think about that; a feudal society of serfs tied to the land, or a Reconstruction Era proto-fascist regime of terrorized sharecroppers, would not be a happy outcome, for all the yield of “minuscule plots” owned (for some definition of ownership) and worked by millions of people. We’d also have to be smart about our common pool resources: Water, pollinators, seeds, and even soil. (Maybe if Jefferson had practiced no till cultivation, he wouldn’t have had to worry quite so much about manure. Anyhow, the frontier closed a long time ago. The earth is round!)

So, I started out wondering if we could feed ourselves from our gardens while moving away from the “too many of us” slash dieback narrative, and I hope I made at least a semi-plausible case that we can, although let me throw in a ceteris paribus to be safe. I ended up with a vision of an alternative society entirely appropriate for Earth Day — a vision that moves beyond the “groaf/jawbz” paradigm that allcoppedout speaks of. Would it really be so bad to work half the year, make your own shoes, and stay loaded on your own beer? Adam Smith’s work ethic is for robots, no? Who needs it? So, optimism!