Yves here. While most of the commentary on the Ukraine has focused on geopolitical issues, and on the role of the neocons in the Obama Administration, this post looks at the Ukraine conflict from a different angle. It contends the drivers are actually economic (not that economics and politics are necessarily distinct). The source that Ilargi relies on is a bit screechy and appears to labor under the misapprehension that the US needs foreign lenders to finance its deficit spending. But if you can read past those shortcomings, I hope you’ll find it also raises some provocative issues.

LEAP2020 is a European political/economic research institute that doesn’t shy away from volunteering opinions on the topics it researches, something that works both for and against it. It publishes a new GEAB (Global Europe Anticipation Bulletin) report every month. I thought I’d share the ‘public announcement’ of the April 2014 issue with you, because it provides a clear idea of what some people think is going on with regards to the US/EU involvement in Ukraine and the war of verbal bellicosity they have initiated with Russia. Some voices, among them former US government official Paul Craig Roberts, are convinced there is a new neocon attempt aimed at provoking war with Putin happening. Others have pointed to the arms race many US allies in the Middle East and Asia appear to be conducting.

Personally, I prefer to remain on the cautious side for now, but I do think Americans and Europeans alike should demand their media and politicians explain what really goes on, instead of merely shouting insults at anyone who looks remotely Russian. What did the US spend the $5 billion+ on that Undersecretary of State Victoria Nuland has stated was handed to an alphabet soup of Ukraine NGOs? What was Nuland doing in Kiev in the months leading up to the February coup in the first place? Ukraine had a poorly functioning government, true, but then so do dozens of other countries. Why Ukraine? Why did NATO rapidly expand eastward after the break-up of the Soviet Union despite explicit promises not to do that? Why is the US apparently about to deploy perhaps as many as 10,000 soldiers to Poland when it just signed a de-escalation deal with Russia? Are we going to hold back on asking these questions until the military chest thumping stand-off has reached a point of no return?

For LEAP2020, the issues are primarily economic, not military. It sees the US as a nation on the verge of breaking down economically, which seeks to drag others (Europe) with it in order to disguise its own troubles:

Europe Dragged Into A Division Of The World Between Debtors And Creditors: The United States’ Desperate Solutions For Not Sinking Alone

In the present confrontation between Russia and the West over the Ukrainian crisis, the image of the Cold War inevitably comes to mind and the media are obviously fond of it. However, contrary to what it gives us to understand, it’s not Russia that seeks the return of an iron curtain but really the US. An iron curtain separating the old powers and emerging nations; the world before and the world afterwards; debtors and creditors. And this in the crazy hope of preserving the American way of life and the US influence over its camp in the absence of being able to impose it on the whole world. In other words, go down with as many companions as possible to give the impression of not sinking.

For the US, these are the current stakes in fact: drag along the whole Western camp with them to be able to continue dominating and trading with enough countries. So, we are witnessing a formidable operation of turning round opinion and leaders in Europe to ensure docile and understanding rulers vis-a-vis the American boss, supported by a blitzkrieg to link them permanently with the TTIP and to cut them off from what could be their lifeline, namely the BRICS, their huge markets, their vibrant future, their link with developing countries, etc. We are analyzing all these aspects in this GEAB issue, as well as the subtle use of the fear of deflation to convince Europeans to adopt US methods.

In the light of the extreme danger of these methods used by the US, it goes without saying that leaving the US ship wouldn’t be an act of betrayal by Europe, but really a major step forward for the world as we have already extensively analyzed in previous GEAB issues. Unfortunately, the most reasonable European leaders are completely paralyzed and the best strategy that they are still capable of currently putting into effect, in the best case scenario, seems to be simply to delay, certainly useful and welcome but hardly sufficient …

Layout of the full article:

4. INSTIL THE FEAR OF DEFLATION IN EUROPE, THE SECOND US WEAPON

5. DEBTORS VERSUS CREDITORS, THE WORLD CUT IN TWO

This public announcement contains excerpt from sections 1 and 2.

With the internet and leak type issues, keeping a secret has become difficult for secret agents and countries with dirty hands. Besides Snowden’s or WikiLeaks disclosures, we have further learned recently that the US was behind a social network in Cuba targeting the destabilization of the government in power. We have been able to watch a video opportunely leaked on YouTube showing the Americans at work behind the coup d’etat in the Ukraine. Or again, it would seem that they are not innocent in Erdogan s current destabilization in Turkey, a country whose situation we will go into in more detail in the next GEAB issue … The masks are falling, certainly on the evidence, but that nobody can ignore.

But the United States is no longer satisfied with developing countries or banana republics. In Europe, they are also managing to turn round the leaders one after the other, so that they obediently follow American interests. It’s no longer what’s good for General Motors is good for America as Charles Wilson (former GM CEO) said in 1953, but what’s good for the US is good for Europe. It already has Cameron, Rajoy, Barroso and Ashton’s support. It has succeeded in getting Donald Tusk’s Poland’s whilst he was strongly resistant at the beginning of his term of office, Italy’s thanks to Renzi s opportunist coup d’etat, and France’s Hollande/Valls thanks in particular to a ministerial reshuffle and a Prime Minister little suspected of anti-Americanism. Unlike the beginning of his term of office when he played the independence card on Mali or on other fronts, Francois Hollande seems to be completely submissive to the United States. What pressure has been put on him? As for Germany, it s still resisting somewhat but for how long (9)? We will expand on these remarks in the Telescope.

Europe is thus dragged towards US interests that aren’t its own, neither in terms of politics, geopolitics, or trade as we will see. Whilst the BRICS have chosen an opposite path and are seeking to withdraw from the henceforth profoundly negative influence of the US at any price, Europe is now being taken for a ride. Evidenced, for example, by Belgium’s purchase of $130 billion worth of US Treasuries in three months from October 2013 to January 2014, being at an annual rate greater than its GDP. It’s certainly not Belgium itself which is responsible for this aberration, but Brussels of course, that’s to say the EU as a little US soldier. Politically Europe is stifled by the US which can take heart in the absence of any leadership. And the way to permanently seal this American stranglehold over Europe is called the TTIP …

We have already amply documented it: unlike the triumphant discussions of recovery based on rising real estate prices and the stock exchange which is at its highest, the real US economy is in dire straits. Food shortages are higher than in Greece. 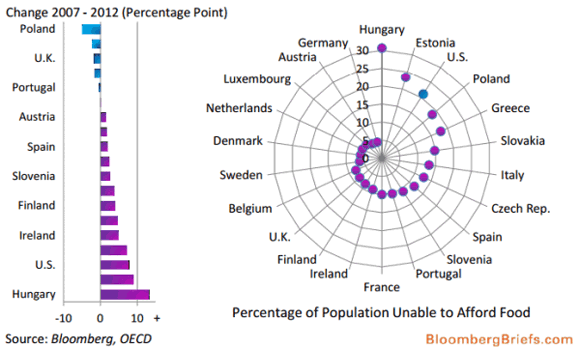 On the right, percentage of the population which can’t afford food, by country (on the left, change 2007-2012). Source : Bloomberg / OECD.
Shops, even good value ones, are closing through lack of customers. Demand for real estate loans are at their lowest, which bodes ill for what follows next and presages an imminent reversal, as we anticipated in the GEAB no 81.

But as we have already said, this isn’t the most important thing. The TTIP’s major stake is the Dollar’s preservation in trade and keeping Europe in the US lap in order to avoid the constitution of a Euro-BRICS bloc able to counterbalance the US. Thus, the Ukrainian crisis, under the pretext of Russian aggression and gas supply, is a good way, in the panic, of imposing the US and the lobbies’ agenda in the face of European leaders who are too weak to act. What wasn’t expected is that the lobbies‘ interests are not necessarily going in the direction one thinks …