Consumers in the Eurozone, who in many places had to tighten their belts as wages and benefits were whittled down, have been spared the scourge of steep inflation. A real benefit, given their squeezed incomes. But central bankers, corporations, and politicians in France and other countries abhor this scenario, and they clamored for more inflation and for the devaluation of the euro, and they made deafening noises to push the ECB to start printing some serious money and douse the lands with QE.

With some effect: on April 3, ECB President Mario Draghi announced that the Governing Council had unanimously committed “to using also unconventional instruments within the mandate to cope with prolonged low inflation.” QE would start any minute. This led to more deafening noises about beating down the strong euro and stirring up inflation with a big bout of money printing and bond buying, to the point where the Wall Street Journal summarized it this way today:

The drumbeat for quantitative easing in the euro zone grows louder by the day – and it is the European Central Bank that is doing much of the banging. Barely a day passes without a speech by a member of the Governing Council discussing why, when and how the ECB might start to buy bonds.

This kind of jabbering about money-printing makes a lot of Germans very nervous.

So the leaders of the parties that make up Germany’s Grand Coalition – Chancellor Merkel’s CDU, its Bavarian sister party CSU, and the center-left SPD – met for a private two-day shindig at the majestic, mountain-top Steigenberger Grandhotel Petersberg and Federal Government Guest House, in Königswinter, near Bonn, to discuss various politically tricky topics from foreign policy to consumer protection in financial matters. The idea was to do it away from the media, out of the spotlight, to hash out some deals, perhaps. At any rate, one of the guest speakers was Draghi.

And while the meeting was private, a “euro-area official present at the meeting,” who didn’t want to be identified, told reporters, according to Bloomberg, that Draghi tried to assuage these skeptical Germans. He expected low inflation to continue, Draghi had told them, but he didn’t see any threat of deflation. The ECB would be ready to embark on QE if needed, Draghi said, but it wasn’t imminent and would be relatively unlikely for now.

This switcheroo fits well into central-bank forked-tongue politics and market-manipulation: pacifying strong-euro Germans out of one side of the mouth, and out of the other side, promising financial markets “whatever it takes.”

Which is more likely to happen? Turns out, what he told German lawmakers in a private session may be closer to reality than the cheap verbiage with which he jawboned the markets in public.

The “recovery” in the Eurozone has been, let’s say, uneven, ranging from catastrophic in some countries, such as Greece and Cyprus, to strong in other counrties. Thanks to the tool of averaging, the deep holes in smaller countries can be papered over with data from larger countries, and what emerges is a Eurozone economy that experienced, after the steep 2009 recession, two years of mild recession in 2012-2013. A very peculiar “recovery.” But if we believe the forecasts for just a moment, the Eurozone will experience growth henceforth.

It’s based on the theory that GDP, after it skids far enough – say 25%, as was the case in Greece since 2008 – won’t actually go all the way to zero. Instead, it will at some point stop dropping and then may even “bounce.” Thus, a period of growth begins, even if economic activity, wages, jobs, number of companies, and whatnot are a lot lower than they were before. But GDP “growth” it is.

And this is the scenario that Draghi and German lawmakers were looking at: economic growth for years to come. And due to current reality, it would have to come independent of bank credit – and in fact, despite declining bank credit: 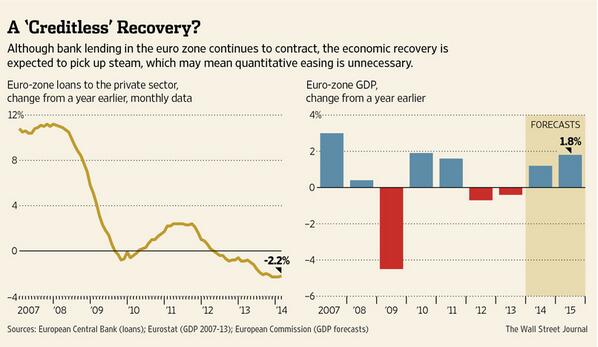 If this scenario plays out – that an economy grows as bank credit stagnates or declines – QE will even officially have zero impact on the real economy since the cheap bank credit it is supposed to make available, when short-term interest rates are already near-zero, won’t be used.

That would remove the fig leaf for QE. And it would bare its raison d’être, namely inflating asset prices to enrich those who hold these assets. But asset prices have been inflated for years, and those few who hold these assets have already been enriched far beyond what they can spend. Whatever little economic impact the illusory “wealth effect” might have had, has already dissipated. Hence, Draghi’s confession to the German lawmakers, even if given under duress: QE won’t be happening anytime soon.