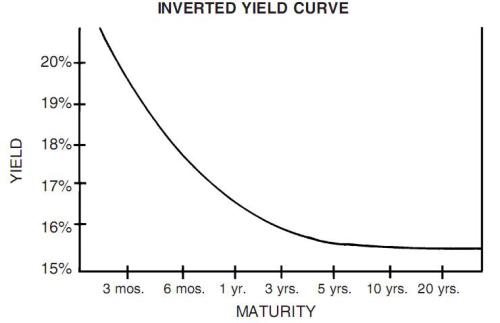 One of the nicest stylised facts in applied economics is that if the Fed inverts the yield curve it will cause a recession. Inverting the yield curve basically means that the Fed hikes the short-term interest rate goes higher than the long-term interest rate. In theory this should lead to long-term lending drying up, investment falling significantly (usually in housing and inventories) and, ultimately, a recession.

The track record of this as an indicator of recessions in the US is too impressive to dismiss. Take a look at the chart below. The shaded areas are recessions. As you can see, every time the short-term interest rate (blue line) climbs about the long-term interest rate (red line) we see a recession within around 12 months or so. 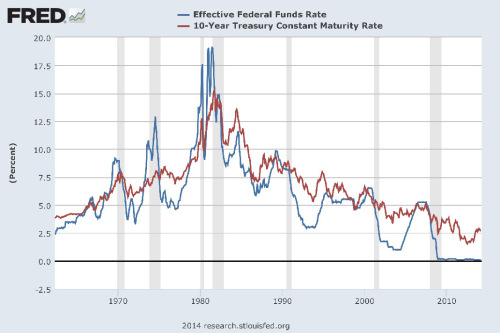 The question, however, is whether this is universal economic constant. And when we turn to the data from other countries we quickly see that it is not.

All the data that follows if from the St. Louis Fed but I have done the graphs myself so that I could include lines indicating British and Japanese recessions. 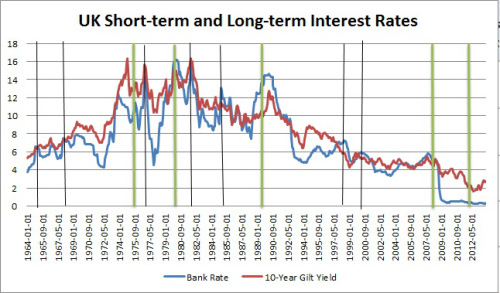 As we can see, the story here is a bit more complicated than in the US. Only three out of the five recessions were precipitated by an inverted yield curve. Meanwhile the yield curve inverted seven times without causing a recession.

This does not bode well for the notion that this correlation might be constant across time and space.

So, let’s turn to Japan. Unfortunately, the data available for Japan is only from during the so-called Lost (Two) Decade(s) and so we will be dealing with a rather unusual period. Nevertheless, it should still prove interesting. 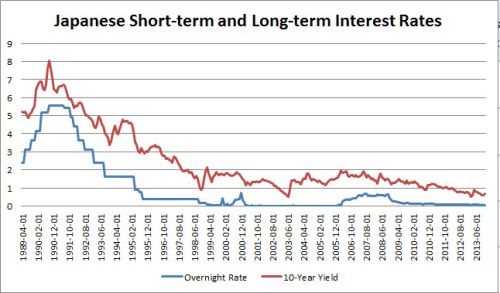 As the reader can see I have not bothered to mark the recessions in this chart. Why? Because it is quite clear that the yield curve never inverted in this period. The short-term interest rate (blue) always stayed below the long-term interest rate (red). What’s more, in this period Japan had five recessions. Including a massive one at the beginning of the 1990s. Clearly these were not correlated with and therefore not caused by an inverted yield curve.

So, the question remains: why is this correlation so strong in the US? This is impossible to answer without some doubt but allow me to shoot from the hip a little and throw out some potential causes. (Suggestions welcome in the comments!)

1. The US is a very insulated economy: due to this recessions are caused largely by internal factors.

2. The US economy is more credit-driven than other economies: hence, the interest rate plays a larger role in investment and consumption decisions.

3. The US has tended to use monetary policy more consistently than its neighbors: which is why the economy has become more ‘used’ to falling into recession when monetary policy is aggressively tightened.

4. There is a self-fulfilling belief in the US that an inverted yield curve leads to recessions.

Frankly, I think that the answer lies somewhere in between the four reasons listed above. I think that reason number four is also probably the most important. Folks in the US get very hot and bothered about inverted yield curves — reflecting the American love for projecting engineering-like causality into just about every field — and this likely has a sort of ‘self-fulfilling prophecy’ effect.

Anyway, whatever the reason the facts are clear: the rule-of-thumb that a recession will generally follow on the back of an inverted yield curve is a good one for the US — whether it is based on hocus pocus or otherwise — but it is probably useless to apply outside of the US. Once again we learn that time-tested lesson: there are no universal laws in that all-too historical field known as economics.