Yves here. A vocal subset of readers likes to complain vociferously about the loss of purchasing power of modern currencies over time. But there are multiple fallacies with this reasoning. First, only the most risk averse keep their savings in cash for long periods of time. They invest them in some manner, even if it is in low-risk assets like Treasury bonds or long-dated certificates of deposit. Except in the post crisis era, where central banks have intervened aggressively to reduce prevailing interest rates to negative real return levels for safe assets, the prices of intermediate and long-term assets incorporate inflation expectations. So the problem is not inflation per se, but when the rate of inflation turns out to be meaningfully higher than what investors thought they’d get when they made their investments.

The second, as some readers have articulately pointed out, that what you can buy in the future (by saving) with those supposedly depreciated dollars is more often than not markedly better than what you could buy 30-40 years ago (you do have offsetting crapification in many categories, like mattresses and tools, but even services we love to hate, like telecommunications, offer way more bang for the buck. Hardly anyone made long distance calls in the 1960s because they were so costly. My family was comfortably middle class, yet we’d mail cassette tapes updates to my uncle (and he’d send his own back) rather than speak at length on the phone.

So now the Eurozone is about to enter into “be careful what you wish for” land for the hard currency types: negative deposit rates. This article argues that the immediate effects will be minor (which if true raises the question of what the ECB thinks it really is going to accomplish). The recent example of negative interest rates in Denmark suggests that banks will not change retail interest rates, which would seem to represent a third rail as far as the general public is concerned. But this precedent for a major currency is likely to get a lot of media play, which has the potential to make depositors deeply uncomfortable even if they see no immediate change in their bank’s product pricing. The long-term impact of lowering the level of trust in the financial regime may be much greater than the experts anticipate.

By Zsolt Darvas, a senior fellow at Bruegel, and Pia Hüttl, a resesarch assistant at Bruegel. Originally published at Bruegel

There are widespread expectations that the ECB will cut its interest rates today. Both the current 0.25 percent ECB main refinancing rate and the current zero percent deposit rate, which banks receive when depositing liquidity at the ECB, are expected to be marginally reduced. The latter would imply a negative deposit rate, meaning that banks would have to pay interest for placing a deposit at the central bank.

With the normalization of money markets and the repayment of the 3-year longer term refinancing operations (LTRO), the sum of banks’ deposits and excess reserves may return to their pre-crisis close-to-zero values. A negative deposit rate may even accelerate the repayment of the LTRO. Therefore, the direct impact of a negative deposit rate, in terms of changing the incentives to hold deposits and excess reserves, would be minimal. 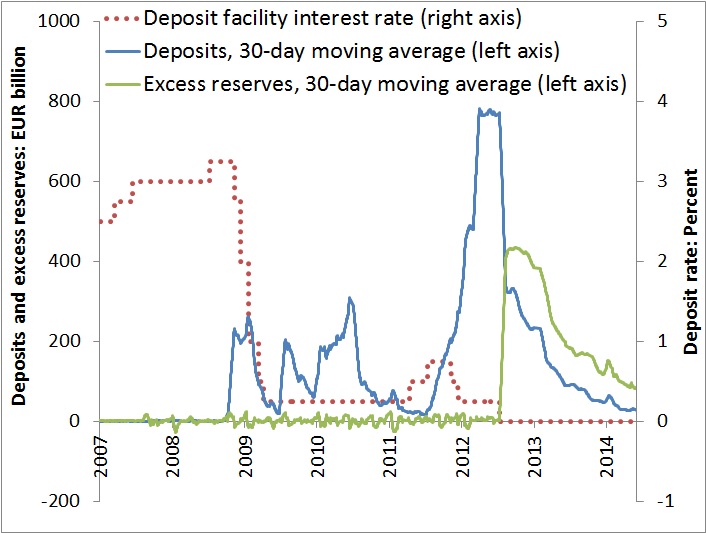 Source: updated from Claeys, Darvas, Merler and Wolff (2014) using ECB data. Note: banks’ excess reserve is the reserves banks hold at their current account with the ECB minus the minimum reserve requirement. Due to huge volatility of daily data, we use a 30-day moving average.

The Danish central bank adopted a negative deposit rate between July 2012 and April 2014. The main objective of the Danish negative deposit rate was to reverse the appreciation of the Danish krona exchange rate, which to a large extent originated from capital flight from the euro area to Denmark, due to the euro crisis (see our earlier post on Denmark here). The ECB has a different goal: boosting inflation and inflationary expectations.

After the introduction of negative deposit rate in Denmark, the Danish Krona depreciated against the euro by about half a percent from 7.43 to 7.46. However, the Danish evidence suggests that the rate cut did not lead to changes in retail interest rates, nor an increase in bank lending.

These findings and the small and declining amount of deposits at the ECB (Figure 1) suggest that a negative ECB deposit rate may not change retail interest rates and bank lending in the euro area. At best, it could weaken a bit the exchange rate of the euro, if the rate cut is not yet fully priced in. But a small change in the exchange may not have a big impact on inflation either.

The main question for Thursday is what other measures will be deployed by the ECB’s Governing Council, and perhaps even more importantly, if Mr Draghi’s communication will pave the way for further actions, such as asset purchases.