Yves here. This post addresses a topic near and dear to my heart: the importance of financial interconnectedness, or what Richard Bookstaber called “tight coupling” in his book A Demon of Our Own Design. Tight coupling occurs when the processes in a system are so closely linked that when certain types of activities begin, they propagate through the system and cannot be halted. Or as Bookstaber put it in 2011:

Non-linear systems are complex because a change in one component can propagate through the system to lead to surprising and apparently disproportionate effect elsewhere, e.g. the famous “butterfly effect”….

Connectedness measures how one action can affect other elements of a system. A simple example of connectedness is the effect of a failure of one critical node on the hub-and-spoke network of airlines. Dynamic systems also emerge from the actions and feedback of interacting components….

The definition you use depends on the purpose to which you want to apply complexity. For finance, several of these measures of complexity come into play. There are non-linearities due to derivatives. Connectedness comes from at least two sources: the web of counterparties and common exposures. Exacerbating all of these is the speed with which decisions must be made.

Bookstaber stressed that the most important step in taming systemic risk was to reduce excessive interconnectedness. Not only did it need to be done, it needed to be done first because trying to reduce risk in a tightly-coupled system will typically backfire, and we cited examples of precisely this sort of result in early 2008.

And the authorities ignored this issue as the crisis was underway. For instance, the reason Bear was rescued rather than allowed to fail was almost certainly concern over its credit default swaps exposures. But did the Fed and Treasury go into overdrive, and start gathering better data from US financial firms and press UK and European regulators to do the same to try to get a handle on the issue? No. They went into “mission accomplished” mode.

And there’s been perilous little interest in addressing the problem of interconnectedness after the crisis. Yes, some activities are being moved to centralized clearing. Yet as this post explains, only recently has the Fed started capturing and publishing data on interconnectedness. While this is a welcome step, why has it been so slow in coming?

At the onset of the global financial crisis, many financial institutions that engaged in risky practices were on the verge of bankruptcy as the housing market crashed. Top regulators soon discovered that shocks suffered by large banks spread quickly throughout the financial system and then to the whole economy. Those large firms, colloquially dubbed “too big to fail,” were also highly interconnected. Jane D’Arista, James Crotty, and a few other economists had identified these inter-connections, but most economists and policy makers had remained clueless.

As the crisis worsened, Fed Chairman Ben Bernanke, New York Fed President Timothy Geithner and others tried to come to grips with what was happening. They started referring to Citibank, Bank of America, Goldman Sachs and other banks as “systemically important,” though former regulator Bill Black more aptly referred to them as “systemically dangerous”. A systemically important/dangerous institution is one that is so large and well-connected to other firms that shocks it suffers are transmitted to many other participants in that system. When these systemically important firms were failing, taxpayers bore the brunt of the impact as the government was compelled to inject massive amounts of taxpayer funds, or face massive economic losses, damages, and inefficiencies. This, of course, gave rise to the now well-known problem of moral hazard, where actors that do not directly bear the costs of risks are incentivized to pile on more risk. Taking into account the potential effects of systemically important firms, it is easy to understand why they can be closely associated with institutions that are “too big to fail.”

Tackling the scourge of systemically dangerous financial firms requires a theoretical and empirical understanding of their evolution and dynamics. But before the Great Recession, only a few academics analyzed situations in which market participants were of similar sizes and they found that interbank deposits could act as primary channels for liquidity shocks (Allen, Franklin, Gale). Some other scholars concluded that interbank credit extensions could result in banks that were “too interconnected to fail” (Freixas, Parigi, Rochet). Recent academic research suggests that this may lead to the exacerbation of externalities. Further post-crisis studies considered sectors or market systems that did not have equal-sized participants. They concluded that shocks to the most interconnected banks spread widely across the financial system (Gai, Haldane, Kapadia) and that large interbank exposures were linked with systemic risk(Cont, Moussa, Santos).

While some progress has been made on understanding theoretical linkages, prior to the crisis, data collection and action by the relevant regulators lagged behind. Some recent estimates of intra-financial lending have tried to fill this gap. But these estimates have had to rely on sectoral, not bank level, data and can therefore be, at best, “guesstimates” of the interconnections (Montecino, Epstein, Levina ). In a step forward, the Dodd-Frank financial reform bill passed in 2010 created a special designation for “systemically important financial firms” and directed the regulators, especially the Federal Reserve, to strengthen their information gathering and regulatory focus with respect to these firms.

Now, late to the game, regulators such as the Basel Committee on Banking Supervision (BCBS) have sought to identify certain characteristics that determine an institution’s level of systemic importance, and interconnectedness is one of them (Federal Reserve, BIS).And finally, the Federal Reserve has begun collecting and disseminating data on the contributions of large financial institutions—dubbed “globally systemically important banks” (G-SIB)—to systemic risk. An important feature of this new FR Y-15 report is the measurement of intra-financial activities via the “Interconnectedness Indicators” in Schedule B and the data collected is similar to BCBS’s assessment of global systemic risk. The FR Y-15 report is accessible on the National Information Center’s website and covers holding companies (banks and Savings & Loans) with total assets of $50 billion or more as of June 30 of the reporting year. Of the 39 holding companies listed as having total assets of greater than $50 billion, 33 banks filed the report, with AIG, GE Capital, Teachers Insurance and Annuity Association, Charles Schwab, State Farm Mutual, and United Services as exceptions. 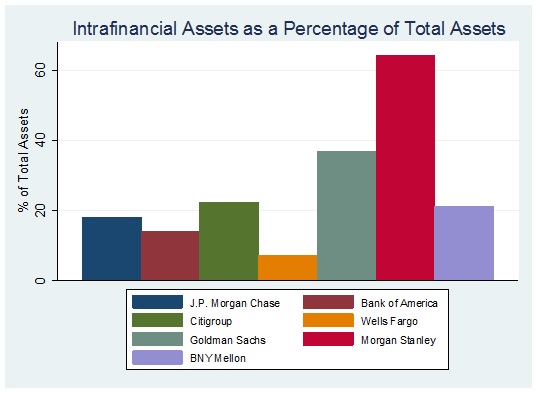 Some doubt that more transparency and information such as contained in this new data set will do much to diminish the dangers arising from interconnectedness. But, in fact, there are already provisions in law requiring the regulators to use data such as these to limit dangerous levels of intra-financial exposures. As Jane D’Arista has emphasized, sections 609, 610 and 611 of the Dodd-Frank Act require the implementation of restrictions on various kinds of credit exposures to other financial institutions. The Volcker Rule, which limits proprietary trading, can also help. Yet, as with much of Dodd-Frank, the strength of the implementation and enforcement of these provisions remains questionable due to the opposition of banks and the connivance of legislators. Other structural solutions have been proposed. For example, breaking up the too big and too interconnected to fail banks is a popular suggestion.

To be sure, better information on these dangers is not sufficient to solve these problems. The key now is to use the information to implement the necessary changes, starting with strictly enforcing the laws that are on the books. If proper measures are not undertaken to curb interconnectedness, it is possible that another unmitigated financial disaster is in the offing.