More and more it’s looking like Obama’s global warming and climate change “initiative” is just a legacy play. He says the right words, then does the wrong deeds.

I can’t think of another way to describe what we’re watching. Would a man who believed these words do those deeds? Let’s look at each, the words and the deeds.

[S]ince this is a very educated group, you already know the science.  Burning fossil fuels release carbon dioxide.  Carbon dioxide traps heat.  Levels of carbon dioxide in our atmosphere are higher than they’ve been in 800,000 years. …

We know the trends.  The 18 warmest years on record have all happened since you graduates were born.  We know what we see with our own eyes.  Out West, firefighters brave longer, harsher wildfire seasons; states have to budget for that.  Mountain towns worry about what smaller snowpacks mean for tourism.  Farmers and families at the bottom worry about what it will mean for their water.  In cities like Norfolk and Miami, streets now flood frequently at high tide.  Shrinking icecaps have National Geographic making the biggest change in its atlas since the Soviet Union broke apart.

So the question is not whether we need to act.  The overwhelming judgment of science, accumulated and measured and reviewed over decades, has put that question to rest.  The question is whether we have the will to act before it’s too late.  For if we fail to protect the world we leave not just to my children, but to your children and your children’s children, we will fail one of our primary reasons for being on this world in the first place.

Let’s now look at just the most recent deeds.

On the deeds side of the ledger, Obama has just opened millions of acres of Gulf of Mexico to oil exploration. Here’s Steve Horn writing at the invaluable DeSmogBlog:

Not Just the Atlantic: Obama Leasing Millions of Gulf [of Mexico] Acres for Offshore Drilling

It is the first time in over 30 years that the oil and gas industry is permitted to do geophysical data collection along the Atlantic coast. Though decried by environmentalists, another offshore oil and gas announcement made the same week has flown under the radar: over 21 million acres of Gulf of Mexico offshore oil and gas reserves will be up for lease on August 20 in New Orleans, Louisiana at the Superdome.

On July 17, the U.S. Department of Interior’s Bureau of Ocean Energy Management (BOEM)  announced the lease in the name of President Obama’s “all of the above” energy policy.

“As part of President Obama’s all-of-the-above energy strategy to continue to expand safe and responsible domestic energy production, BOEM…today announced that the bureau will offer more than 21 million acres offshore Texas for oil and gas exploration and development in a lease sale that will include all available unleased areas in the Western Gulf of Mexico Planning Area,”proclaimed a July 17 BOEM press release.

The release says this equates to upwards of 116-200 million barrels of oil and 538-938 billion cubic feet of natural gas and falls under the banner of the U.S.-Mexico Transboundary Hydrocarbon Agreement.  […]

Here’s what’s being “leased” (sorry, given away for a pittance … sorry, monetized by the billionaire oil and gas kings): 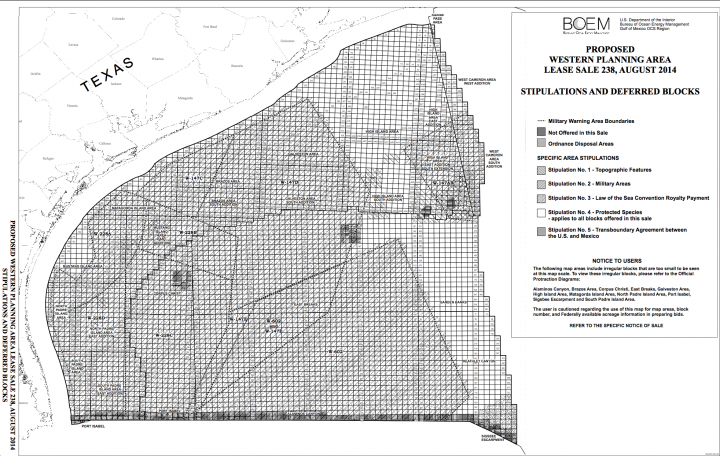 Could this endanger tourism (not to mention livability) in the Texas coast towns of Port Isabel and South Padre Island? Horn again:

How should we think of this?

Does Obama Think None of That Oil and Gas will be Burned?

The question one almost has to ask is this — What does President Obama think will happen to the oil and gas extracted from under the Gulf?

And if it will be monetized, what of his words, that “Burning fossil fuels release carbon dioxide.  Carbon dioxide traps heat.  Levels of carbon dioxide in our atmosphere are higher than they’ve been in 800,000 years”?

I honestly don’t know what to make of this drastic (and tragic, at least for us) disconnect, except to call it, as I did above, a “legacy play.” I did not want the first Black president in U.S. history to be one more sordid bringer of billionaire screwage — and world-historical screwage at that. But there it is.

By the way, here’s what that screwage is buying. Bidding is now going on for Obama’s Legacy Library, with Chicago (natch) in the running. Here’s one proposal, by the Chicago architectural firm HOK (formerly Hellmuth, Obata + Kassabaum): 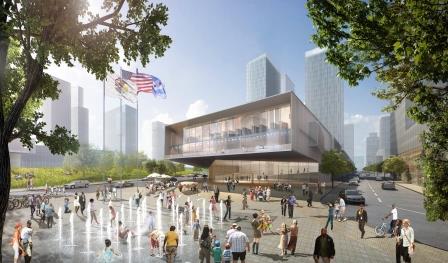 So forward-looking, it could be Starfleet Academy (do click; you’ll be surprised). Here’s another view: 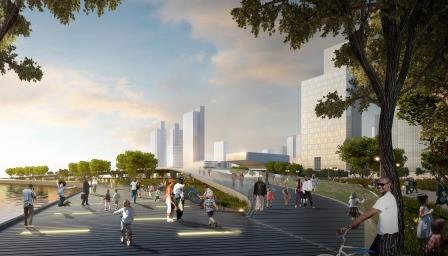 See the peaceful happy people, playing in the Obama Legacy Library Park? You won’t see those faces on South Padre Island. And 20 years down the road, if Obama gets his way and Exxon gets its Obama-provided billions, those faces will look a tad bit more concerned than they do here. Here’s a hint of what’s in store for us if Obama and Exxon succeed.

Just a taste of where the descent from civilization, that gift of the narrow and stable Holocene climate, may take us. We start with our current civilizational state and work backwards:

The electronic age of wireless communication.

The electric age of power generation and transmission, including by coal and oil consumption.

The mechanical age of power generation, including by coal and oil consumption.

The animal age (beasts and slaves) of power generation.

The age of agriculture and small towns and cities.

The age of hunters and gatherers, our tribal past.

Extinction, as the planet sloughs us off.

As the social, economic and political stability of the planet degrades (if it does), where does our devolution stop? If carbon-burning never stops — and that’s clearly one of the choices on the menu — it’s hard to see our devolution stopping before we’re generating most of our power with our beasts and our backs.

Now consider, when the human world was young and we were coming from the Stone Age to the Iron Age and beyond, all the goods of the earth were close to the surface — iron, copper, tin. As we descend (if we do) to stone age living, where will we find these precious things again, to begin that long climb back? Perhaps only in landfills.

All of which is meant to say — please, this really is a turning point and a tipping point in the economic, social and political world. Mr. Obama, take your words seriously and act as though you believe them. You can yourself stop many of those nasty carbon emissions from ever seeing the light of day.

▪ Do these deeds now to demonstrate real commitment to limiting CO2 emissions. Control what you can control by your own unilateral action.

That’s the ask. Care to join me? Obama will have power for just a few years, and we have just a few years to use our power to influence him. In order to prevent him from destroying his legacy (and our American futures), he needs to know we’re watching.