Yves here. I wanted to add this short post as an indicator of the lack of definitive knowledge (at least among those who are being candid with the media) as to critical details as to how the MH17 was destroyed, in particular ones that would give a definitive reading as to what group pulled the trigger.

It is also noteworthy, scanning the English language press, that the bloodthirsty rhetoric has toned down a bit. For instance, at the Financial Times yesterday, not only were MH17 accusations blaming Russia the lead story, but there were follow-on stories as well as related commentary, such as, The Kremlin’s Machiavelli has led Russia to disaster, Forcing Putin to think again, and Guest post: Putin’s no-win situation in Ukraine.

To see the contrast, this was the first page of the web version of the pink paper last night: 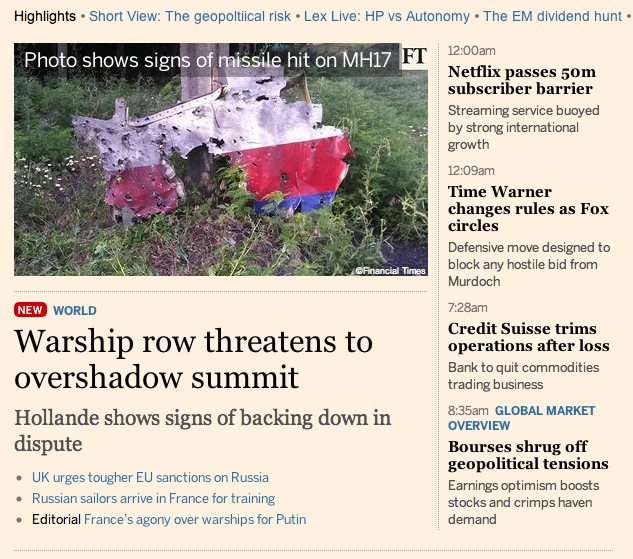 This is how it looks today, as in much more like a normal newsday: 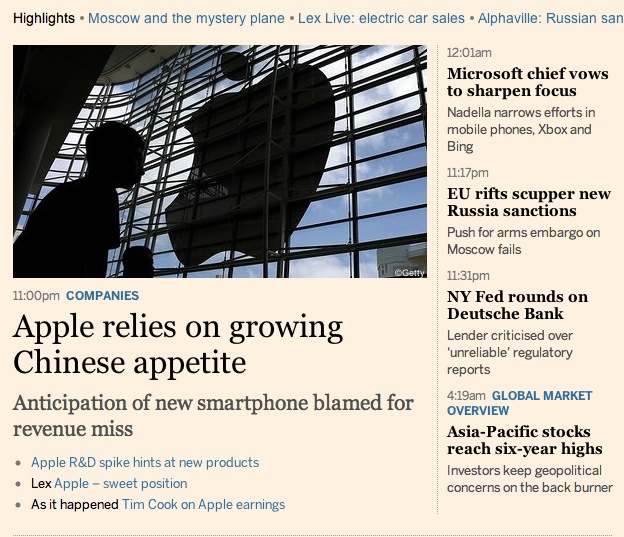 This image gives a clue for the pullback in vilification. The second story in the right column, EU rifts scupper new Russia sanctions, explains:

Europe’s foreign ministers failed to agree new sanctions against Russia for its alleged role in the downing of MH17 despite a push by Britain, Sweden and a group of eastern European countries for an arms embargo to be imposed on the Kremlin.

The ministers instead asked EU officials to draw up wider-ranging measures – but only if Russia fails to co-operate with the West in the future. The US and several European allies believe a Russian-supplied missile system was used by Ukrainian separatists to shoot down the Malaysia Airways airliner over eastern Ukraine last Thursday.

Recall that we pointed out yesterday that the apparent aim of the rush to pin the destruction of the plane on Russia was to get Europe to join in the tougher sanctions that the US imposed on Russia last week. It looks as if the US has lost this round.

Mind you, the depressurization may prove to be short lived. But trying to push France to the wall via trying to get it to cancel its contract to Mistral helicopter warships to Russia was more than France was prepared to tolerate, from both an economic and national sovereignity standpoint. The French also got their rhetorical licks in by pointing out British hypocrisy in the dependence of its banks and the London real estate market on cash from Russian oligarchs. And if I were Germany or Italy, I might take pause from the specter of the US resorting to bare-knuckle tactics.

That isn’t to say that the drumbeat of criticism of Russia has abated, merely lessened. Again, using the Financial Times as an indicator, today’s stories include Vladimir Putin starts to show the strain as outrage mounts over MH17, Putin ally warns on Russia’s isolationist course, and Russia tensions fail to provoke reaction (basically arguing that investors should be more concerned than they are).

My concern has been and remains that the US is intensifying conflicts (first its failed effort in Syria, now here) when our military is overextended, the US public has no enthusiasm for foreign adventures, and we don’t have a lot of good will with our allies right now, thanks to the Snowden and other spying revelations. And as we stressed, the feel of the official statements and the media posture over the MH17 tragedy is disturbingly like the propagandizing in the runup to the Iraq War. (And remember, being anti-war then did not mean you were pro-Saddam, nor does being anti-escalation now mean that one is pro-Putin).

The US seems to be playing a tactical game while Putin has been more strategic. Mind you, the US as the world’s sole superpower can inflict damage on Putin if it is determined to. But the upside looks awfully limited, and the costs and downside could be large indeed.

U.S. officials said earlier today that Malaysian Airlines flight 17 was probably shot down by mistake … and there was no proof that Russia was directly involved.

U.S. intelligence agencies have so far been unable to determine the nationalities or identities of the crew that launched the missile. U.S. officials said it was possible the SA-11 was launched by a defector from the Ukrainian military who was trained to use similar missile systems.

In other words – despite the incessant beat of the war drums and false claims – the U.S. has little evidence that Russia is responsible.

According to a source briefed on the tentative findings, the soldiers manning the battery appeared to be wearing Ukrainian uniforms and may have been drinking, since what looked like beer bottles were scattered around the site. But the source added that the information was still incomplete and the analysts did not rule out the possibility of rebel responsibility.

If true, then the U.S. might be grasping for way to explain the Ukrainian uniforms.

That statement about a possible “defector” might explain why some analysts thought they saw soldiers in Ukrainian army uniforms tending to the missile battery in eastern Ukraine. But there is another obvious explanation that the U.S. intelligence community seems unwilling to accept: that the missile may have been launched by someone working for the Ukrainian military.

In other words, we may be seeing another case of the U.S. government “fixing the intelligence” around a desired policy outcome, as occurred in the run-up to war with Iraq.