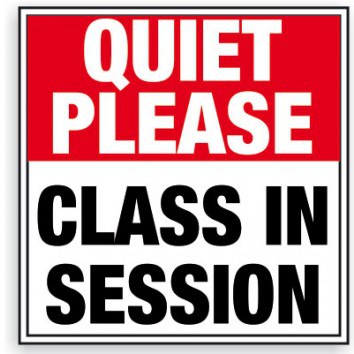 Yesterday when I published my post on Krugman and the vulgar Keynesians not understanding the meaning to the term ‘liquidity trap’ I came to realise that many readers — both sympathetic and hostile — do not really understand the Keynesian theory of financial markets. I then realised that this was actually quite understandable given that it is not much discussed today (with some notable exceptions such as Jan Kregel and Minskyians like Randall Wray).

Some years ago the financial markets were very much so discussed and understood. Key references in this regard are the works of Keynes himself (particularly the Treatise on Money), GLS Shackle, Roy Harrod’s book Money and Joan Robinson’s essay ‘The Rate of Interest’. There are also some more minor works but I will not here provide a bibliography. (From a purely theoretical point-of-view I have found Shackle’s work the best while from an institutional point-of-view I have found Harrod’s work best).

Okay, let’s first start by what we mean by ‘cash’ and ‘bonds’ in Keynesian financial theory. Most people are being led down a wayward path by the likes of vulgar monetary economists like Krugman in this regard (or was he a trade economist? someone remind me…). They seem to think that ‘cash’ is money — deposits, notes, coins, that sort of thing — and ‘bonds’ are government securities. Actually, in financial marketspeak cash includes short-term government securities. It also includes money market funds and other highly liquid investments. There is a nice guide to this at the money manager Charles Schwab’s website here. In this guide the author writes:

Many people think of cash as physical currency—actual bills and coins in circulation. For practical purposes, however, the term “cash” also includes traditional bank deposits, such as checking and savings accounts, where you generally have access to your funds on demand and without risk of losing any principal (up to FDIC limits).

In an investment context, however, the definition of cash expands to other types of cash investments, including short-term, relatively safe investment vehicles such as money market funds, US Treasury bills (T-bills), corporate commercial paper and other short-term securities.

For the purposes of financial macroeconomics I think that we would be best to exclude corporate commercial paper. This is very short-term debt issued by corporations.* Although highly liquid, it nevertheless displays many dynamics associated with what should properly be called ‘bonds’. I would also say that, following the Modern Monetary Theorists (MMTers), we should probably be clear that government securities should only be treated as cash proper if they are denominated in the currency of issuance. (For practical purposes we can modify this when needed).

The primary goal of, say, lowering the interest rate is to allow companies to borrow more cheaply. Here is a nice graph showing some interest rates to get a feel for what is going on in the financial markets. We will examine this in more granular detail later. 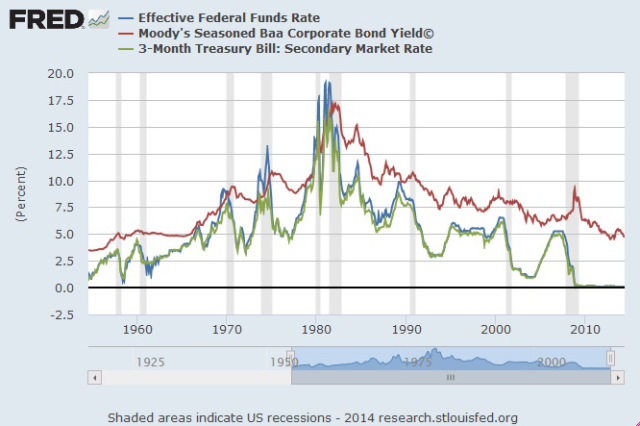 As we can see, the three-month Treasury bill rate tracks the overnight rate set by the Fed. This is because these are basically cash substitutes. The Corporate Baa Bond Yield, on the other hand — and this is only one of many interest rates I could have chosen — does track the other two to some extent but not completely. Although it generally gravitates toward the overnight rate it does display some independent dynamics of its own.

The gap between the yield on bonds and the ‘cash’ interest rate — to deploy our terminology — is a measure of what Keynes called ‘liquidity preference’. It reflects the market’s taste for low yield ‘cash’ over higher yield ‘bonds’. Let us be clear: in a functioning market there will always be a spread here to reflect relative risk. But, as we shall see, this spread is not fully under the control of the monetary authorities at all times and the amount by which it fluctuates day-to-day and month-to-month is reflective of liquidity preference. Schwab provides us with a nice table telling their customers how to hold this ‘cash’ liquidity.

Let us zoom here on a recent period to get a better idea of what is going on. 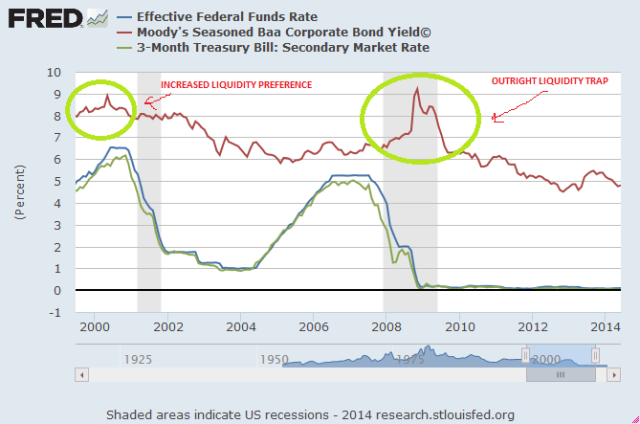 Here I have marked two recent periods where we see financial markets clearly responding to increased perceived risk. Looking at the time series we see that the Baa Corporate Bond Yield follows the overnight rate quite smoothly. But just prior to the 2001 recession while there was turmoil in the stock markets we see a clear, small spike that is not in keeping with the general smooth movement. This spike accounts for a jump in interest rates on Baa bonds of nearly 0.5%. This may not seem all that significant but in the land of the financial markets it is a very significant event and is indicative of heightened liquidity preference.

The second period I have marked is much more extreme. Here the Fed was rapidly lowering interest rates. Markets were anticipating this lowering too. Yet the Baa bond yield spiked by two full percentage points. This is a liquidity trap proper. The market were roiled by the turmoil that was taking place after 2008 and they all rushed for cash even though the interest rate on this cash was falling. By 2010 the liquidity trap had subsided. This was mainly in response to the markets coming to believe that the bailouts were convincingly going to fix the financial system. TARP did more to ease the liquidity trap, I would argue, than QE did.

Well, that’s all for today class. Use this knowledge to go out and attack the vulgar Keynesians that are clogging up the general discourse with poorly defined terms and nonsense. Today we do not face a liquidity trap. Rather we face a situation in which investment is not responding to low interest rates. That is what vulgar ISLMist Keynesians call an ‘investment trap’ and it takes place when the IS-curve on the ISLM diagram is vertical. While I do not buy into this notion it is far closer to where we are today than being in a liquidity trap. If one must worship at the temple of ISLM at least get it right, for God’s sake!

___
* Yves here. I agree with Pilkington in that corporate commercial paper is “placed”. It is sold to investors and held to maturity, and is rarely resold. Hence it actually is not all that liquid in practice (as in if you were selling CP you had purchased, which is typically not resold, it would be a clear sign that you were desperate and dealers would gouge you).