Yves here. Some technology enthusiasts predict that as many as 47% of current jobs will be displaced in the next decade. Candidates include not only trucking and bus driving (to be eliminated by self-driving vehicles) but more and more white collar work, as computer get better at the sort of information scanning and analysis that is now done by entry and low-level workers. This post examines different scenarios for how that might play out in Europe.

Of course, the elimination of more and more analytical jobs raises the question of how will professionals learn a craft? This has been a complaint on Slashdot for years, that there are comparatively few entry level information technology jobs in the US, and that we are ceding the IT industry to China and India because we won’t be replacing the current crop of seasoned professionals. What happens when yeoman roles no longer exist.

We also have the problem that economists like to worry about: where do the jobs come from? As we’ve said before, if you have a system in which people must sell their labor as a condition of survival and you don’t provide enough opportunities to do that, you have sown the conditions for revolt.

One bit of cheery news in this post is that, to quote William Gibson, while the future is here, it’s not evenly distributed.

By Jeremy Bowles, an economist at the International Growth Centre, a development economics research centre based at the London School of Economics. Originally published at Bruegel

Who will win and who will lose from the impact of new technology onto old areas of employment? This is a centuries-old question but new literature, which we apply here to the European case, provides some interesting implications.

The key takeaway is this: even though the European policy impetus remains to bolster residually weak employment statistics, there is an important second order concern to consider: technology is likely to dramatically reshape labour markets in the long run and to cause reallocations in the types of skills that the workers of tomorrow will need. To mitigate the risks of this reallocation it is important for our educational system to adapt.

In the former camp, recent work by Robert Gordon has outlined the hypothesis that we are entering a new era of low economic growth where new technological developments will have less impact than past ones. Against him are the maximalists, like Andrew McAfee and Erik Brynjolfsson, who predict dramatic economic shifts to result from the coming of the ‘Second Machine Age’. They expect a spiralling race between technology and education in the battle for employment which will dramatically reshape the kind of skills required by workers. According to this view, the automation of jobs threatens not just routine tasks with rule-based activities but also, increasingly, jobs defined by pattern recognition and non-routine cognitive tasks.

It is this second camp – those who predict dramatic shifts in employment driven by technological progress – that a recent working paper by Carl Frey and Michael Osborne of Oxford University speaks to, and which has attracted a significant amount of attention. In it, they combine elements from the labour economics literature with techniques from machine learning to estimate how ‘computerisable’ different jobs are. The gist of their approach is to modify the theoretical model of Autor et al. (2003) by identifying three engineering bottlenecks that prevent the automation of given jobs – these are creative intelligence, social intelligence and perception and manipulation tasks. They then classify 702 occupations according to the degree to which these bottlenecks persist. These are bottlenecks which technological advances – including machine learning (ML), developments in artificial intelligence (AI) and mobile robotics (MR) – will find it hard to overcome.

Using these classifications, they estimate the probability (or risk) of computerisation – this means that the job is “potentially automatable over some unspecified number of years, perhaps a decade or two”. Their focus is on “estimating the share of employment that can potentially be substituted by computer capital, from a technological capabilities point of view, over some unspeciﬁed number of years.” If a job presents the above engineering bottlenecks strongly then technological advances will have little chance of replacing a human with a computer, whereas if the job involves little creative intelligence, social intelligence or perceptual tasks then there is a much higher probability of ML, AI and MR leading to its computerisation. These risks range from telemarketers (99% risk of computerisation) to recreational therapists (0.28% risk of computerisation).

Predictions are fickle and so their results should only be interpreted in a broad, heuristic way (as they also say), but the findings are provocative. Their headline result is that 47% of US jobs are vulnerable to such computerisation (based on jobs currently existing), and their key graph is shown below, where they estimate the probability of computerisation across their 702 jobs mapped onto American sectoral employment data. 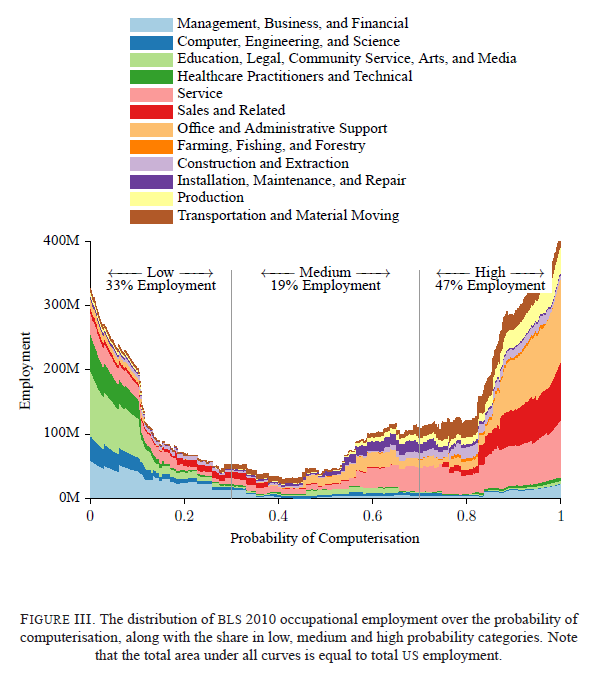 How do these risks distribute across different profiles of people? That is, do we witness a threat to high-skilled manufacturing labour as in the 19th century, a ‘hollowing out’ of routine middle-income jobs observed in large parts of the 20th as jobs spread to low-skill service industries, or something else? The authors expect that new advances in technology will primarily damage the low-skill, low-wage end of the labour market as tasks previously hard to computerise in the service sector become vulnerable to technological advance.

Although such predictions are no doubt fragile, the results are certainly suggestive. So what do these findings imply for Europe? Which countries are vulnerable? To answer this, we take their data and apply it to the EU.

At the end of their paper (p57-72) the authors provide a table of all the jobs they classify, that job’s probability of computerisation and the Standard Occupational Classification (SOC) code associated with the job. The computerisation risks we use are exactly the same as in their paper but we need to translate them to a different classification system to say anything about European employment. Since the SOC system is not generally used in Europe, for each of these jobs we translated the relevant SOC code into an International Standard Classification of Occupations (ISCO) code,  which is the system used by the ILO. (see appendix)  This enables us to apply the risks of computerisation Frey & Osborne generate to data on European employment.

Having obtained these risks of computerisation per ISCO job, we combine these with European employment data broken up according to ISCO-defined sectors. This was done using the ILO data which is based on the 2012 EU Labour Force Survey. From this, we generate an overall index of computerisation risk equivalent to the proportion of total employment likely to be challenged significantly by technological advances in the next decade or two across the entirety of EU-28.

It is worth mentioning a significant limitation of the original paper which the authors acknowledge – as individual tasks are made obsolete by technology, this frees up time for workers to perform other tasks and particular job definitions will shift accordingly. It is hard to predict how the jobs of 2014 will look in a decade or two and consequently it should be remembered that the estimates consider how many jobs as currently defined could be replaced by computers over this horizon.

The results are mapped below. 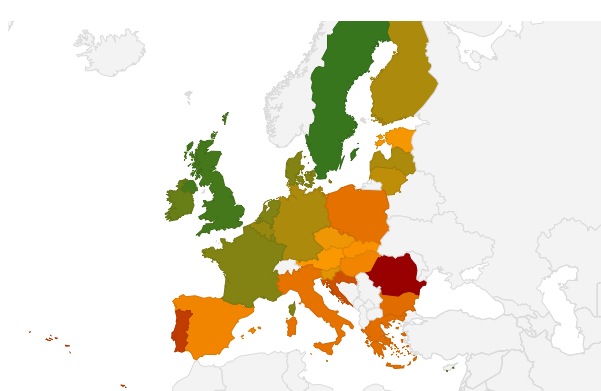 The pattern that emerges is not unsurprising. Northern countries – Netherlands, Belgium, Germany, France, UK, Ireland, and Sweden – have computerisation risk levels similar to the US figure discussed above. The further away from this core the higher the risk of job automation, with countries on the periphery of the EU most at risk.

Given the argument that this automation will primarily affect low-skill, low-wage jobs, it is little surprise that the results correlate with other economic indicators. Below, we plot the log of GDP per capita across the EU-28 countries against our calculated risks of job automation, which presents a negative association.

Fig. 3: GDP per person versus the risk of computerisation 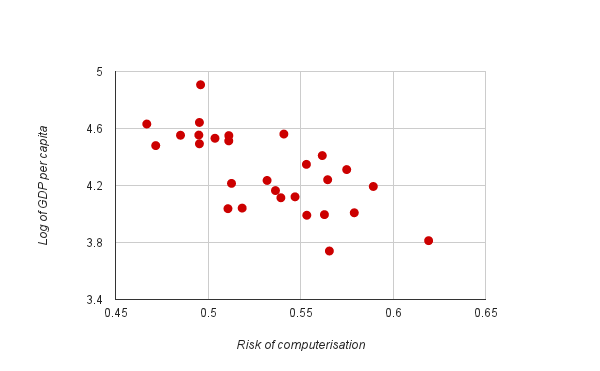 Source: As above, Eurostat

This might suggest that the computerisation of jobs is likely to affect the labour markets of peripheral EU countries more severely than northern countries over the same period of time. However, an opposite effect moderates this: peripheral countries have historically adopted new technology more slowly. Due to differences in how fast firms across countries tend to adopt technologies, therefore, it is hard to predict ex ante which countries will be hurt most in a given number of years (since it is hard to know whether lags in technology adoption will outweigh the greater number of vulnerable jobs). Furthermore, the timing of adoption will of course depend on the relative price of the technology. Similarly, the impact and path of future regulation makes it hard to make any statements about the timing of these technological shifts. But in the long term the periphery is more at risk once this adoption occurs.

When, and if, such predictions of technological advance come even close to fruition then the effects will be dramatic – irrespective of geography. Using these estimates generated from the Frey & Osborne paper, they range from around 45% of the labour force being affected to well over 60%.

Though the first order concern in Europe is to tackle persistent unemployment rates, the second order concern of labour allocation cannot be ignored. If we believe that new developments will indeed hit sectors tradition­­ally largely immune to technology towards the low-skill end of the spectrum, then a reallocation of workers towards tasks less susceptible will have to occur. Such tasks are likely to prioritise creative and social intelligence, which implies a substantial challenge in the development of European human capital. Reallocating workers in this way is a prospectively painful process and it seems evident that education systems will have to adapt to meet this challenge.

This translation was done at a fairly crude level – from 702 extremely fine-grained classifications into the 22 more aggregated ISCO job categories for which ILO provides good, recent data for across every EU country. SOC and ISCO classifications are structurally related and so this translation process was relatively simple. The six digit SOC code (e.g. 11-1011 for CEOs) comprises the two digit top-level code classifying the job (11 for managers) with the four digit sub-code describing the exact job type (chief executives). The ILO data we use for Europe is classified according to the two digit top-level ISCO classifications (22 of them) – so they provide employment data on code 11 (managers) in general across Europe rather than especially CEOs. However, different particular jobs in the same cluster should be similarly vulnerable to automation and so we average multiple SOC computerisation risks when translating into one ISCO job category. For example, public relations managers (SOC code 11-2031), CEOs (11-1011) and natural science managers (11-9121) should not especially differ in how vulnerable they are. The task is therefore to take the first two digits from all the SOC classifications in the Frey & Osborne dataset and to find its equivalence in the ILO ISCO system and to average across multiple jobs where necessary. This aggregation certainly loses a bit of nuance, but given the predictive nature of the data and the above point about very similar jobs within each of the 22 classifications, this seemed a reasonable solution.