One the markets that has been least easy to predict this year has been US bonds. The long term US bond bears, that are often monetarists at heart and believe QE will bring inflation, have been queuing up to short. Likewise, post-Keynesian’s have pointed at Japan and laughed about secular deleveraging and widow-maker trades.

The fact is, the bears have been wrong all year, and even with recent inflationary rumblings are still wrong. That has not stopped BofAML issuing a new warning today:

Today’s market reaction to Fed chair Janet Yellen’s Humphrey Hawkins testimony – which was initially perceived as hawkish – provided another highlight of just how nervous investors have become about the risk of tighter monetary policy, post the very strong June payrolls report. Thus, as 10-year interest rates rose 4bps during the first hour after the release of the testimony, stocks declined about 0.4% (Figure 1). 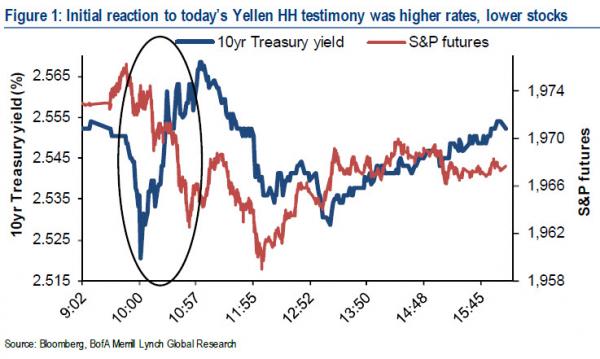 Clearly weighing on stocks was also commentary in the Fed’s Monetary Policy Report that certain sectors – specifically smaller social media and biotech companies – appear richly valued in the market. However, these sectors account for a very small share of the market and the Fed argued that the general stock market is not trading far from historical norms. Today’s initial market reaction mirrored almost exactly the initial reaction on July 3rd to the June jobs report itself, as in the first seven minutes or so 10-year Treasury yields rose 5bps while stocks declined roughly 0.3% (Figure 2). 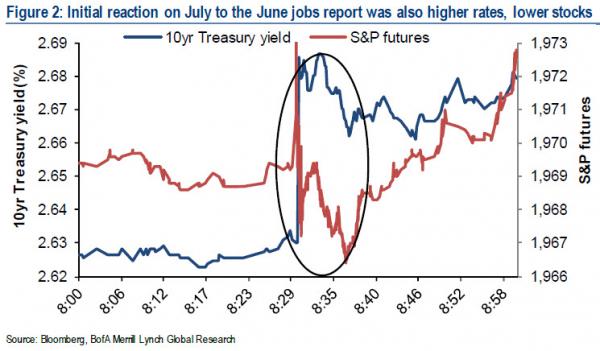 We argued that the current pace of jobs creation mirrors what forced the Fed’s hand in the 1994 rate hiking cycle, which led to lower stocks and wider credit spreads. This is not to suggest that we are forecasting a repeat of 1994 – only that we, as statisticians, have insufficient information yet to reject decisively that this is 994. Hence the initial reaction today when – after strong readings on Empire Manufacturing and Retail Sales –chair Yellen sounded more upbeat in her assessment of the economy and repeated that “If the labor market continues to improve more quickly than anticipated by the Committee, resulting in faster convergence toward our dual objectives, then increases in the federal funds rate target likely would occur sooner and be more rapid than currently envisioned”. Again, this scenario may not actually play out – but clearly the likelihood of such development increases with good economic data.

Again, we think this means that hedges should be set and long positions in risky assets reduced. We also think that this most likely explains the weak markets during the early part of last week, in a vacuum of little economic data, following the strong jobs report issued just before the Independence Day holiday weekend (Good news, flight to quality). For example declining stocks led by higher beta small caps, and widening credit spreads (Figure 3). With rallying Treasuries this indeed suggests rational risk reduction in reaction to the jobs report (Figure 4).

Apart from buying vol in credit we think that a particularly attractive hedge against interest rate risk in credit right now is the 10s/30s spread curve flattener.

Fair enough. But I’m not holding my breath. The Fed does not look in a hurry to me with Janet Yellen rightly pointing to a lot of shadow slack in the US labour market. Mid next year still looks like the timing for a hike.

In the mean time, one major support for the bond bulls has emerged in China. Last night the US released its CIC data and it showed China is very active in the US market again. From the WSJ:

The Chinese government has increased its buying of U.S. Treasurys this year at the fastest pace since records began more than three decades ago, data released Wednesday show. The purchases help explain Treasurys’ unexpectedly strong rally this year. The yield on the 10-year U.S. Treasury note has fallen to 2.54%, from 3% at the end of 2013. Yields fall as prices rise.

The world’s most-populous nation boosted its official holdings of Treasury debt maturing in more than a year by $107.21 billion in the first five months of 2014, according to the U.S. government data. The buying has been fueled by China’s efforts to lift its export-driven economy by weakening its currency, the yuan, against the dollar, market analysts said, a strategy that encompasses hefty purchases of U.S. assets. 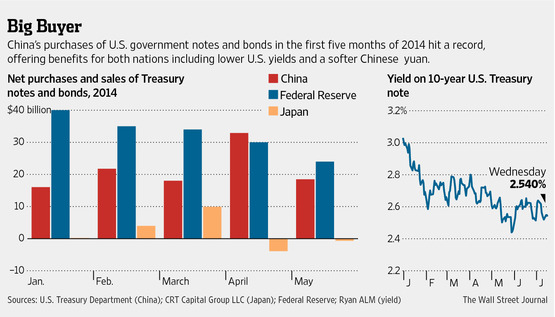 Hmm, well, it’s a lot of support but the explanation is wrong. The Chinese trade surplus is not the result of any new vigorous mercantilist push. The PBOC only began deflating the yuan a few months ago and that was more about controlling the hot money flowing into credit than it was trade. The rising Chinese trade surplus has resulted from the Chinese rebalancing. Imports haven’t grown in two years:

And it was rapidly rising imports in raw materials that helped correct the surplus until 2012. But since then, the slowdown in building and corresponding falls in commodity prices has the surplus rising again:

This is important because it’s probably going to keep going for a few years yet. Eventually you can rightly expect rebalancing to drive a shrinking trade surplus as the rising real exchange rate and unleashed consumer suck in goods from all over. But before that happens commodity prices are going to fall further and China is going to have plenty of dough to recycle into US bond markets.

They might send it elsewhere but, then again, they’ve tried that and now they’re back. When the money mounts up there really is no other market big enough to accommodate the Chinese surplus.

The US bond bears could be disappointed for quite a while yet.