Ambrose Evans-Pritchard makes a compelling argument in his latest article: that the $5.4 trillion of investment poured into fossil fuel exploration and development projects over the last six years includes quite a lot of investments that will never show an adequate return. He argues that when that sorry fact starts to be recognized, the losses could be the wake-up call to investors who have shrugged off risk as financial assets climb to ever-more-implausible valuations.

To play devil’s advocate for a minute, what made subprime losses so deadly wasn’t their magnitude on paper but the colossal degree of leverage employed. Subprime was only a $1.3 trillion or so market, and the losses across subprime loan pools was only 40%, so on paper, only a bit over a half a trillion of value was torched. But that’s before you get to the fact that more than 5 times the value of subprime bonds was created synthetically, via credit default swaps packaged into heavily or entirely synthetic CDOs. And those CDS weren’t on the value of the entire pool; they were on the riskiest tranches. So all the “extra” bets were on the parts of the bonds that were most likely to, and did, blow up.

We worked through how spectacular the leverage was in some detail in ECONNED, but for a rough sense, we’ve often referred back to an article by Gillian Tett we quoted in the early days of this blog, in January 2007:

Last week I received an e-mail that made chilling reading. The author claimed to be a senior banker….

“Hi Gillian,” the message went. “I have been working in the leveraged credit and distressed debt sector for 20 years . . . and I have never seen anything quite like what is currently going on. Market participants have lost all memory of what risk is and are behaving as if the so-called wall of liquidity will last indefinitely and that volatility is a thing of the past.

“I don’t think there has ever been a time in history when such a large proportion of the riskiest credit assets have been owned by such financially weak institutions . . . with very limited capacity to withstand adverse credit events and market downturns.

“I am not sure what is worse, talking to market players who generally believe that ‘this time it’s different’, or to more seasoned players who . . . privately acknowledge that there is a bubble waiting to burst but . . . hope problems will not arise until after the next bonus round.”

He then relates the case of a typical hedge fund, two times levered. That looks modest until you realise it is partly backed by fund of funds’ money (which is three times levered) and investing in deeply subordinated tranches of collateralised debt obligations, which are nine times levered. “Thus every €1m of CDO bonds [acquired] is effectively supported by less than €20,000 of end investors’ capital – a 2% price decline in the CDO paper wipes out the capital supporting it.

“The degree of leverage at work . . . is quite frankly frightening,” he concludes. “Very few hedge funds I talk to have got a prayer in the next downturn. Even more worryingly, most of them don’t even expect one.”

The general point is that leverage makes all the difference in how big the knock-on effects are from investment losses. The dot-bomb era destroyed about $5 trillion in market value (and $5 trillion in 2000 is worth more in current dollars), but these were equity investments, with not much in the way of borrowing juicing them.

Now it’s almost a certainty that these fossil fuel plays aren’t geared anything remotely like subprime paper was. But there is likely to be some borrowing at work, certainly at oil majors themselves, and the companies they are investing in are likely using some debt financing as well (readers who know typical capital structures of the various major types of players in this space are very much encouraged to speak up). Moreover, wealthy individuals (and this includes the 0.1%) are much more leveraged that the rich of the past. They’ve bought into the logic of subprime borrowers (“put your assets to work”) and have been using the super cheap interest rates on offer to finance investments (including borrowing against notoriously illiquid-in-bad-times collateral like art). So there may be more leverage-on-leverage than there appears to be at first blush.

Here are the highlights of the Ambrose Evans-Pritchard article, which I encourage you to read in full:

Data from Bank of America show that oil and gas investment in the US has soared to $200bn a year. It has reached 20pc of total US private fixed investment, the same share as home building. This has never happened before in US history, even during the Second World War when oil production was a strategic imperative.

The International Energy Agency (IEA) says global investment in fossil fuel supply doubled in real terms to $900bn from 2000 to 2008 as the boom gathered pace. It has since stabilised at a very high plateau, near $950bn last year. 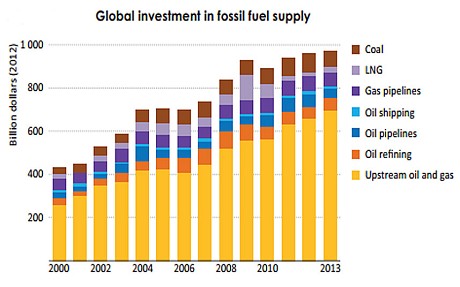 ….. Output from conventional fields peaked in 2005. Not a single large project has come on stream at a break-even cost below $80 a barrel for almost three years….

There are, of course, other candidates for the bubble prize of the current economic cycle, now into its 22nd quarter and facing the headwinds of US monetary tightening. China’s housing boom has echoes of the Tokyo blow-off in 1989, and is four times more stretched than US subprime in 2006, based on price-to-income…

Yet the sheer scale of “stranded assets” and potential write-offs in the fossil industry raises eyebrows. IHS Global Insight said the average return on oil and gas exploration in North America has fallen to 8.6pc, lower than in 2001 when oil was trading at $27 a barrel. What happens if oil falls back towards $80 as Libya ends force majeure at its oil hubs and Iran rejoins the world economy?…

The Oxford Institute for Energy Studies says the Eagle Ford Dry Gas field, the Marcellus WC T2 and “C” Counties, Powder River, Cotton Valley, among others, are all losing money at the current Henry Hub spot price of $4.50. “The benevolence of the US capital markets cannot last forever,” it said.

And that’s before we get to another threat to fossil fuel investments that Evans-Pritchard mentions: that governments might get serious about climate change and impose meaningful restrictions, like hefty carbon taxes. Right now, that seems like a tail risk, but the crisis just past was a tail event as well. And much higher energy prices resulting from restriction on fossil fuel production would slow down economic activity markedly, which again could blow back to leveraged investors in unexpected ways.

Evans-Pritchard was freakishly accurate in calling the oil/commodities bubble in 2008, and in predicting, contrary to conventional wisdom in the financial press at the time about inflation risk, that the deflationary forces were very much intact and would dominate. So while this article falls short of being a market call, Evans-Pritchard is flagging a risk that bears watching.