By Jérémie Cohen-Setton, a PhD candidate in Economics at U.C. Berkeley and a summer associate intern at Goldman Sachs Global Economic Research. Originally published at Bruegel.

What’s at stake: An intriguing paradox of our age is that the global economy is becoming increasingly local, with super-productive cities driving innovation and growth nationwide. This has generated a discussion as to whether local land use policies, which restrict the housing supply in high productive metro-areas, should be constrained by central governments to limit their negative externalities on overall growth.

Local economies in the age of globalization

Enrico Moretti writes that the growing divergence between cities with a well-educated labor force and innovative employers and the rest of world points to one of the most intriguing paradoxes of our age: our global economy is becoming increasingly local. At the same time that goods and information travel at faster and faster speeds to all corners of the globe, we are witnessing an inverse gravitational pull toward certain key urban centers. We live in a world where economic success depends more than ever on location. Despite all the hype about exploding connectivity and the death of distance, economic research shows that cities are not just a collection of individuals but are complex, interrelated environments that foster the generation of new ideas and new ways of doing business.

Enrico Moretti writes that, historically, there have always been prosperous communities and struggling communities. But the difference was small until the 1980’s. The sheer size of the geographical differences within a country is now staggering, often exceeding the differences between countries. The mounting economic divide between American communities – arguably one of the most important developments in the history of the United States of the past half a century – is not an accident, but reflects a structural change in the American economy. Sixty years ago, the best predictor of a community’s economic success was physical capital. With the shift from traditional manufacturing to innovation and knowledge, the best predictor of a community’s economic success is human capital.

Ejaz Ghani, William Kerr and Ishani Tewari explain that the debate on whether cities grow through specialization or diversification dates back to Alfred Marshall and Jane Jacobs. Marshall (1890) established the field of agglomeration and the study of clusters by noting the many ways in which similar firms from the same industry can benefit from locating together. Jacobs (1969), on the other hand, pushed back against these perspectives – she emphasized how knowledge flows across industries, and that industrial variety and diversity are conducive to growth.

Big cities in the crisis

Richard Florida writes that in the years since the economic crisis, powerhouse metros like San Francisco, New York, and Washington, D.C., have continued to grow in importance. In 2012, the top ten largest metropolitan economies produced more than a third of the country’s total economic output.

Josh Lehner writes that the largest metros (the 51 largest have a population of 1 million or more) have seen the strongest gains in recovery. The second set of metros have seen some acceleration and the nonmetro (rural) counties have seen deceleration over the past year. It is also interesting to note that only the largest cities have seen growth rates return to pre-recession levels, while the others lag. This is at least partly due to the nature of the Great Recession in which housing and government have been large weights on the recovery. These jobs also play a disproportionately large role in many medium, smaller and rural economies than in big cities. 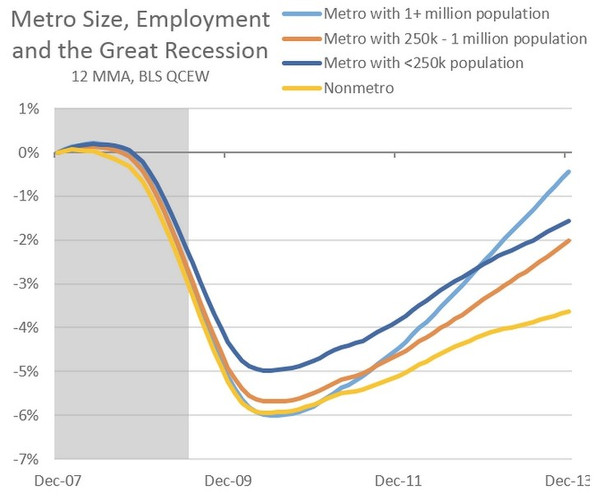 Dealing with the nationwide externalities of local regulations on land use

Wonkblog reports that for Enrico Moretti we should care about how San Francisco and big cities like it restrict new housing because the economic repercussions of such local decisions stretch nationwide. These super-productive cities have been among the least likely to add new housing since 1990. By preventing more workers who would like to live in the city from moving in, big cities are holding back the U.S. economy from being as productive as it could be. Yet, despite these negative national externalities, land-use policy has always been a local issue.

Chang-Tai Hsieh and Enrico Moretti write that one possible way to minimize this negative externality would be for the federal government to constraint U.S. municipalities’ ability to set land use regulations. Currently, municipalities set land use regulations in almost complete autonomy, since the effect of such regulations have long been perceived as predominately localized. But if such policies have meaningful nationwide effects, then the adoption of federal standard intended to limit negative externalities may be in the aggregate interest.

Chang-Tai Hsieh and Enrico Moretti write that a possible solution is the development of forms of public transportation that link local labor markets characterized by high productivity and high nominal wages to local labor markets characterized by low nominal wages. Enrico Moretti writes that California high-speed rail has always been thought of as a fast way to move people from Los Angeles to San Francisco, as competing with the plane. But it might be that actually its most meaningful economic impact would be as a way to allow people in Central Valley low-wage cities to commute to the Bay Arean

Kristian Behrens and Frédéric Robert-Nicoud write that inequality is especially strong in large cities. Large cities are more unequal than the nations that host them. For example, income inequality in the New York Metro Area (MSA) is considerably higher than the US average and similar to that of Rwanda or Costa Rica. Large cities are also more unequal than smaller towns. While larger cities increase the income of everyone, the top 5% benefit substantially more than the bottom quintile.