We’ve written from time to time about the fact that alternative investments like hedge funds and private equity funds don’t live up to their marketing hype. For instance, hedge funds claim they deserve their outsized investment fees because they deliver “alpha,” meaning manager outperformance. In reality, it has long been known that at most what they really provide is “synthetic beta,” which is a return profile that investors find attractive because it is not strongly correlated with that of other investments, and therefore lowers portfolio risk. In reality, that “synthetic beta” is typical of the defective airbags all too regularly sold in finance: they fail when you most need them to work, which is in badly spooked markets.

Yet the marketing spin of wonky hedge funds touting intimidatingly complex strategies and slick private equity fund professionals with their cherry-picked success stories remain all too appealing to investors hungry for returns. And the most credulous and desperate are public pension funds, although many endowments and foundations and high net worth individuals are not far behind.

FT Alphaville has a devastating update on this front from Nomura along with other research findings. Nomura looked both at funds of hedge fund performance as well as that of the results of the underlying hedge funds and private equity funds. Fund of funds add another layer of fees, typically a 1% management fee and a 10% upside fee on top of the underlying hedge fund fees.* And before you point out the obvious, that it’s nuts to pay that much in fees, remember that Wall Street’s business model has long been based on preying on customers’ magical thinking. For instance, a short paper published in the early 1980s by Robert Vishny, Josef Lakonishok, and Andrei Schleifer** discussed with some puzzlement that the asset management industry delivered negative value, meaning it was extractive. They seemed perversely optimistic that investors would over time realize that fact and the industry would shrink.

By contrast, the FT Alphaville report is refreshingly direct in describing how obvious it is that alternative investments is largely an exercise in rent seeking: “Never have so many been paid so much for doing so little.” 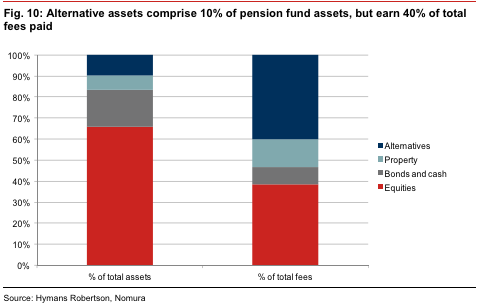 In our view, alternative assets as a group show consistently poor performance. Beta is high. Alpha is near zero, if not negative. Correlation with standard asset classes is high. Return and diversification benefits are negligible.

Specifically, hedge fund alpha has been negative since 2008 even as hedge fund performance has come to mirror that of stocks even more than before.

Other research is similarly devastating. One study concluded that investing in hedge funds produced from 1980 to 2008 produced only the same returns as investing in Treasuries, meaning investing in stocks would clearly beat that handily. If you want to invest in something that confers bragging rights and lousy returns, movie deals might be a better fit. One reason that returns are so poor is that 2/3 of hedge funds fail.

As for private equity, it will be no news to NC readers that the Normura authors were frustrated by their inability to get good performance data. And they also focused, as we have, on the loopy idea that investors can outperform each other in manager-picking and all wind up with top 25% private equity industry performers. As we’ve pointed out, the basis for pushing that justification for investing in private equity, that it looked good if you could get in the the top tier of funds, is now even more obviously bogus since there is no longer a cohort that consistently beats the pack. From Nomura, emphasis theirs:

For the statistically-minded, this practice is a whopper. First, how can anyone claim to represent an investment opportunity by ignoring the lower 75% of the sample data? Second, there is an implicit presumption on the part of the promoter that they will be in the top 25% in the future. This practice is not only presumptuous, but also contrary to the results of a whole literature on the empirical analysis of fund manager returns.

Finally, the authors tell you how to get the return profiles of these strategies on the cheap:

To achieve the returns of hedge fund portfolios:
1) start with basic market exposure using the S&P 500 index or a rolling short VIX position,
2) reduce leverage to achieve an exposure of somewhere between 30% to 60% of standard, and
3) deduct fees.

To achieve the returns of private equity:
1) start with a basic market exposure like the S&P 500, but more particularly the S&P Midcap 400,
2) increase leverage to achieve an exposure of somewhere between 120% to 150% of standard, and
3) deduct fees.

Many NC reader tend to be dismissive of the way that investors get fleeced by hedge fund and private equity fund managers, based on some basic misconceptions. The first is that the investors are sophisticated and can take care of themselves. Second, and far more important is that what happens to these chumps is of no concern to most people. That couldn’t be more wrong, since public pension funds are the biggest group of private equity limited partners and are also significant hedge fund players. When investments come up earning less than they could due to managers ripping out too many fees, it’s the public that suffers when state and local authorities have to find ways to fill pension shortfalls.

For instance, today the New York Times has an in-depth report on the worsening pension fund shortfalls in the New York City pension system. While it included some of the usual woes, like unrealistically high return assumptions (set by Albany), which led to underfunding, and an aging population of workers, the article highlights how poor investment performance is the biggest contributor to the NYC system’s tsuris:

Like pension systems everywhere, New York City’s has been strained by a growing retiree population that is living longer, global market conditions and other factors.

But a close examination of the system’s problems reveals a more glaring issue: Its investment strategy has failed to keep up with its growing costs, hampered by an antiquated and inefficient governing structure that often permits politics to intrude on decisions. The $160 billion system is spread across five separate funds, each with its own board of trustees, all making decisions with further input from consultants and even lawmakers in Albany…

Last year, Morningstar, the investment research firm, evaluated for the first time the strength of state and local pension systems across the country and rated New York City’s as poor….

At the same time, New York has been aggressively chasing higher investment returns, shifting more money into riskier assets, which come with higher fees. Even as the system’s returns have lagged, pension officials have resisted making changes in the oversight structure that many experts believe could lead to improvements.

As we’ve written with private equity scams, the gatekeepers in New York City are part of the problem:

Despite state laws calling for regular audits of the city pension system, there has not been one since 2003. Now Benjamin M. Lawsky, the state’s financial services superintendent, appears to be making up for lost time. In November, he subpoenaed about 20 companies that help pension trustees decide how to invest the billions under their control.

And another glaring problem is that the fragmented NYC system does nothing in-house, meaning it pays the maximum amount possible in fees:

New York’s pension system is also the only major governmental system in the country to outsource virtually all of its investment decisions to outside money managers, pension experts said. That inevitably leads to higher investment fees. In 1997, the city’s biggest fund, the New York City Employees’ Retirement System, known as Nycers, spent $17.3 million in investment fees for a $31.7 billion portfolio. By 2010, it was spending $175 million for a $35.4 billion portfolio.

Some have argued the pension system would perform better if it hired its own professionals to manage the money in-house. Fees would drop, and the overall strategy would be more coherent, they contend.

Not only do some large pension funds run their own in-house index funds, but seven pension funds in Canada have started doing private equity directly, cutting out the costly middlemen, and they’ve beaten industry averages after fees. So much for the necessity of paying top dollar for all that “talent”.

The fact that highly respected investors like CalPERS and Harvard are cutting private equity allocations, and widely-read publications like FT Alphaville are openly derisive about alternative investment returns is a promising sign that investors are starting to question the bogus premises of investing in high-fee investment products. Simple prudence and self-preservation should reduce outsized commitments to these vendors.

________
* The reason investors are game to invest in such a larded-up-with-charges product is that many investors are too small to be able to put together a diversified portfolio of hedge fund or private equity fund investments on their own, given that the funds have minimum sizes for investment. In addition, some funds offer access to funds that are perceived as difficult for smaller investors to get into. Your humble blogger is told that some investors care more about bragging rights (“I’m in XYZ fun
** I have searched repeatedly for this Brookings paper and have been unable to find it, but it got quite a bit of attention at McKinsey back then.