Memo to Chris Christie: when you are in a hole, quit digging.

If you have any appetite for political slugfests, an unusual one is playing out in New Jersey. Former Pando, now International Business Times reporter David Sirota has been digging into dubious connections between officials in various states who have influence over pension fund investments and their well-heeled Wall Street connections and patrons.

First, a short background on the Baker story: Sirota showed how that Baker made a $10,000 donation to the New Jersey Republican Party shortly before Christie officials gave Baker’s firm a pension management contract. That donation ran afoul of the Garden State’s pay-to-play rules that bar contributions from executives and partners of entities that manage state pension funds.

New Jersey launched an investigation into Sirota’s charges and announced that as a result, it was exiting the contract with Baker’s firm.

In a sign that Sirota is drawing blood, Christie himself, as well as members of his administration, have launched personal attacks on Sirota rather than making honest rebuttals to his charges (another strategy has been to misrepresent the stringent requirements of the state pay-to-play law). The paper of record in Massachusetts, the Boston Globe, has yet to deign to report on this scandal. [Update/correction: The Boston Globe has in fact reported on the story. Its only account was on Baker’s denial two months ago, which has been trumped by the investigation finding and the cancellation of the contract with Baker’s company].

Sirota has also been probing the relationships among state pension fund investments and the holdings of long-standing Christie friend and pension fund overseer Robert Grady. The Christie administration has denied, forcefully, that Grady had any financial interest in firms that benefitted from New Jersey pension fund investments on his watch. That word “interest” is critical, because that’s the term of art in the New Jersey pay-to-play law. And in reading the discussion that follows, bearing in mind that New Jersey rules bar state officials from “being involved” in “any official manner” in which they have direct or indirect personal or financial interest.*

Grady was pursuing a new strategy, shifting money into hedge funds and private equity holdings in the name of diversification and higher returns. He was now pushing to entrust up to $1.8 billion of New Jersey pension money to the Blackstone Group, one of the largest players in private equity.

But one special feature of that Blackstone bet underscores the interlocking relationships at play as states increasingly rely on the counsel and management of Wall Street institutions to invest their pension dollars: One of the private equity funds New Jersey was investing in – a pool of money called Blackstone Capital Partners VI – claimed among its investors a Wyoming-based company named Cheyenne Capital. That company’s list of partners included one Robert Grady.

In short, Grady was pushing to invest New Jersey public money in the same Blackstone fund in which his own firm was investing — without disclosing that fact to N.J. officials.

There are two legs to Sirota’s charges. One is that Grady’s firm looks to have gotten preferential treatment from Blackstone. Documents from an SEC investigation state that Cheyenne made a total investment in the Blackstone fund of $2.69 million. That is well below its minimum investment requirement of $20 million.

Due to the opacity of these investments, it is impossible to ascertain whether Cheyenne might have gotten other concessions, such as reduced fees in the fund itself, by lowering the management fees or the performance fees paid by investors in the fund.

Another way that private equity funds reward preferred parties is by giving them co-investment rights, which allows them to invest in the portfolio companies directly and bypass fees at the fund level. We explained how that works last year:

Let’s look at a particularly egregious conflict involving the Boston law firm Ropes & Gray. Ropes is Boston’s ultimate Brahmin firm, with a pedigree dating back to 1865. Past partners including Henry Cabot Lodge and Archibald Cox.

The March 6, 1998 Federal Register contained an application to the SEC by Ropes & Gray to form an in-house 1940 Act “investment company” that would be owned by the employees of the firm in order to invest their capital. Critically, as part of its investment company application, Ropes sought and was granted by the SEC an exemption from the normally comprehensive and ongoing public reporting requirements to the SEC that investment companies normally provide.

How has RGIP been investing the Ropes partners’ money? Thanks to the SEC waiver, it’s impossible to know everything. But RGIP appears regularly as an investor in Bain and Thomas H. Lee (another top Boston-based PE fund) deals.

Pay attention, because the distinction I’m about to make is critical to understanding how stinky this is. I am not talking about RGIP being an investor in Bain and Thomas H. Lee funds. To the extent that were the case, RGIP’s interests would be aligned with Harvard as a fellow fund investor, since they’d be in all the same deals, be subject to the same gains and losses, and presumably pay the same or similar fees.

Instead, Ropes & Gray, Harvard’s counsel, is investing alongside Bain and Thomas H. Lee funds in which Harvard is an investor. From an economic perspective, Ropes & Gray is investing ahead of Harvard, because it is not paying the fees a limited partnership investor pays. Moreover, it may well be in an even more advantaged position by virtue by getting access to only the best deals (as in cherrypicking within the funds**) and could potentially better rights on other fronts than its client.

Let me stress: we have no evidence that Cheyenne got this sort of sweetheart deal. But we also can’t be certain that it didn’t. The cult of secrecy around private equity investments means the public, including New Jersey taxpayers, has no idea of knowing, beyond the concession on the minimum investment, whether Grady’s firm got other sweeteners as a result of the New Jersey investment in the same fund. And that is precisely why the New Jersey statues are so draconian on the issue of possible personal and financial conflicts of interest.

And don’t kid yourself that Grady was too remote to have had anything to do with the pension fund investment in Blackstone VI:

Another questionable relationship involves the same Blackstone fund’s salvage of Knight Capital. Grady was on the board of Stifel, which was a significant customer of Knight and also joined in the rescue (click to enlarge): 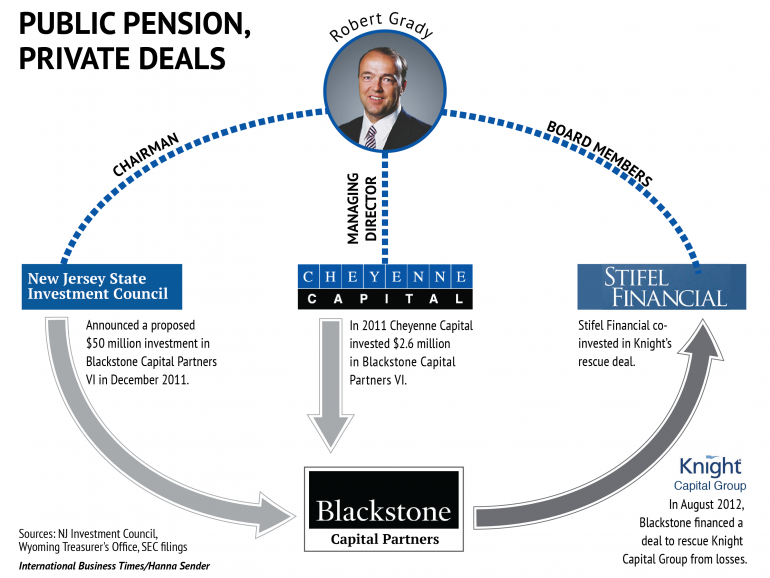 In August 2012, Blackstone Capital Partners VI used money from its investors to finance a deal involving Knight Capital Group, according to SEC documents. Knight had notably suffered losses in the wake of news that a computer glitch in its electronic trading system had sent share prices plummeting on the New York Stock Exchange. The infusion of Blackstone money stopped the bleeding. Blackstone had been joined in its rescue of Knight by another firm, Stifel Financial, which later acquired a piece of Knight’s trading and sales operations. Among the members of Stifel’s board was Grady, according to corporate documents.

According to SEC documents, Grady also owns more than 10,000 shares of the company’s stock, and N.J. financial disclosure forms show Grady is compensated for his position at Stifel.

In short, Blackstone Capital Partners VI applied its investors’ money — including funds from the New Jersey pension system — to co-invest with Stifel, whose board included among its ranks the overseer of New Jersey’s pension investments.

Does this look arm’s length to you? Factor this into your assessment:

[Christopher] Santarelli, the New Jersey Treasury department spokesman, said Grady’s State Investment Council would have no knowledge or influence over how Blackstone opted to invest the money in its fund. Yet a New Jersey investment official previously declared that state officials often influence the financial decisions of the private equity funds in which the state invests.

“We’re a large player,” said then-Division of Investment executive director Timothy Walsh, in a May 2011 interview with the Bergen Record. “We have impact.” He told the newspaper that state pension officials sit on advisory boards for most of the private equity firms with which New Jersey invests, adding that New Jersey’s pension system is better able to influence private equity firms’ decisions than those of companies whose stock it owns.

Assemblyman John Wisniewski, who heads the state’s Select Committee on Investigation, is pushing for an official probe into l’affaire Grady.

Even though it seems unlikely in the cesspool of New Jersey politics, it is still entirely possible that Robert Grady’s conduct regarding his dealings with Blackstone, both with the fund investment and the Knight rescue, were on the up and up. But even so, he clearly looks to have violated the state’s stringent laws about conflicts of interest.

And this case serves as yet another object lesson in how private equity’s draconian secrecy policies can foster corruption. Even if it didn’t actually occur here, it would be easy for it to have taken place.

___
*Clearly, this restriction would not apply to cases where a pension fund executive held a public stock and a New Jersey pension fund bought shares in the same stock. The impact of the New Jersey buy, if any, would be too small and short term for the state official to derive any benefit.