Yves here. While this argument about marginal propensity to consume may seem a bit abstruse, it’s at the core of whether, in economic terms, it is productive to have people other than the rich have decent levels of income. Or to state the thesis in a more technocratically-acceptable manner, whether lowering income inequality helps growth. The debate hinges on whether people with lower incomes actually are spending more than people with higher incomes. As obviously as the answer might seem (how can rich people have lots of financial assets if they aren’t spending everything they earn?), as this post by Steve Roth shows, Jared Bernstein appears to have muffed the analysis.

I’ve said many times: every economic assertion should be preceded by the words “by this measure.” For big economic questions, you need to look at lots of different measures, lots of different way, to get a feel for what’s going on.

This has come home to me as I’ve considered Jared Bernstein’s ongoing takedown of liberal beliefs regarding inequality, marginal propensity to consume (MPC), and economic growth — epitomized in this remarkably weak-kneed December 2013 paper for the (supposedly) liberal Center for American Progress.

Bernstein is a strong voice for progressive policies. But in this paper and widely elsewhere, he repeatedly pooh-poohs the MPC argument.

That argument briefly stated: poorer people spend a higher percentage of their income/wealth each year, so if income and wealth are less concentrated, more widely distributed, there will be more spending.

But Bernstein repeatedly points to certain measures suggesting that things don’t seem to have worked out that way. Even as inequality has increased over the last 35 years, real per-capita consumer spending has continued to rise: 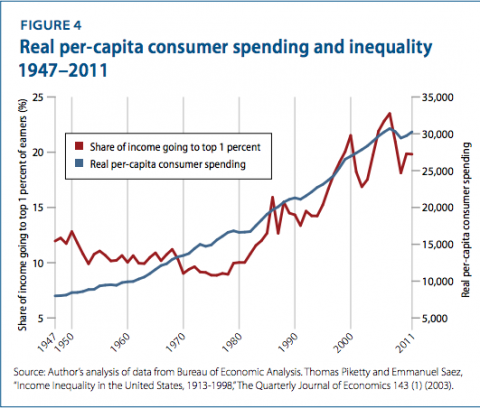 But even as he puts great weight on this display, he acknowledges that it isn’t very good evidence. You need a counterfactual: Sure, spending went up, but if inequality had remained the same, would it have gone up faster?

He attempts to answer that question with some regression analyses: 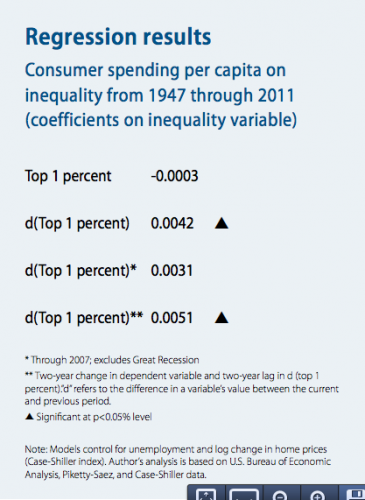 This is a rather impenetrable data display; read the adjacent copy* to understand it. But in brief, his regression-constructed counterfactual says that if equality had remained the same, there would have been less spending.

This seems to bear out the conservative narrative you’d expect to be hearing from AEI or The Heritage Foundation: greater inequality causes faster growth. (Presumably through “incentive” effects on “the most productive members of our society”?)

But statistical savants will see almost instantly that this counterfactual is weakly constructed, is logically tenuous at best. And what if we look at some other measures — especially measures of wealth, as opposed to income? Bernstein does make some attempt to include wealth measures in his regressions – Case-Shiller house prices and (rather oddly) unemployment. And he goes on to discuss the rise in consumer debt as a likely explanation for the spending growth. But skyrocketing debt — a (negative) component of wealth — is completely absent from these regressions, and he doesn’t look at wealth explicitly

We have explicit measures of wealth. Here’s what consumption spending looks like relative to wealth over the last half century. Call this The Velocity of Wealth — how much of their wealth households turn over each year on purchases of newly-produced goods and services (the stuff of GDP). Click each graph to go to the FRED page. 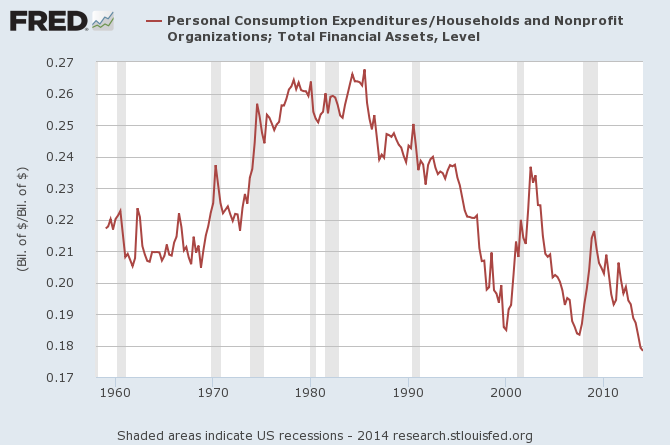 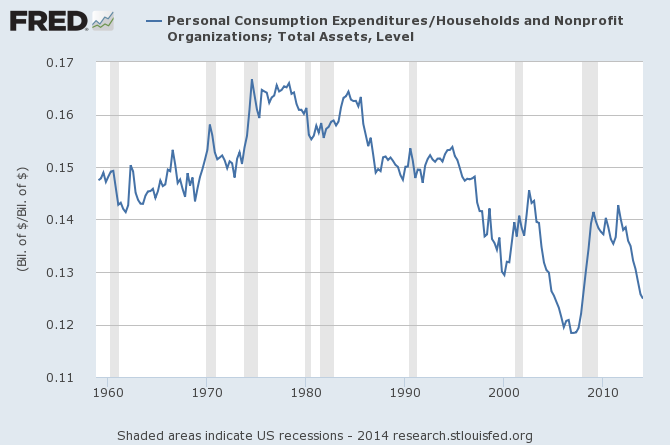 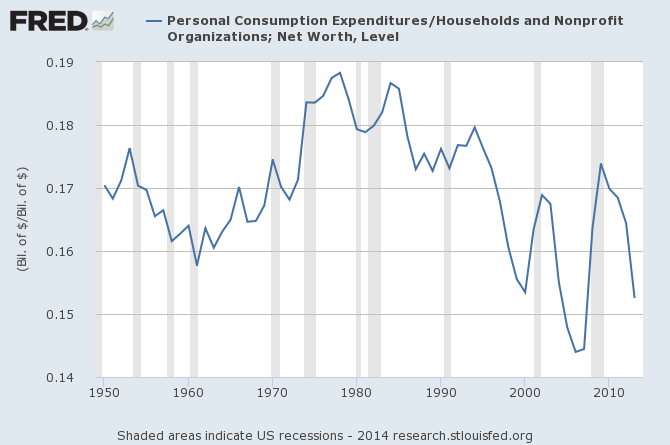 The last two measures are especially interesting because they incorporate home-equity wealth (which Bernstein tried to do, somewhat idiosyncratically, using a Case-Shiller variable in his regressions). And the last measure also incorporates household debt.

By all these measures, we see a massive, three-decade secular decline in spending relative to wealth over 35 years — the very same period over which we’ve seen massive growth in wealth inequality.

So what about the counterfactual? If wealth inequality had remained the same instead of skyrocketing, would we have seen these declines in wealth velocity? Some regressions might tease out some answers to that question. But given the apparent long-term nature of this effect, they’re going to have to include more than the rather arbitrary and singular, freshman-statistics-level two-year lag employed (only) in the last of Bernstein’s regressions. (The lag techniques Arin Dube used in his definitive and statistically sophisticated takedown of Reinhart-Rogoff’s 90%-debt foolishness seem especially well-suited to this work. Also take a look at these revealing if amateurish long-term cross-country regressions on wealth inequality and growth.)

So: more research needed. But that’s never stopped the conservatives from deploying their arguments, has it? One thing is certainly true: while that research is ongoing, it’s time for liberals to start taking their own side in this argument.

* Update: The report PDF is one of those annoying ones that doesn’t let you copy large chunks. Have to read the description there.