By John Weeks, the author of Economics of the 1%: How mainstream economics serves the rich, obscures reality and distorts policy, Anthem Press. Originally published at Triple Crisis

Some older readers might recall that during 2010-2013 politicians and the media manifested great anxiety over the unmanageable level of the deficit and a disastrously high public debt. Prominent among the deficit/debt Cassandras were a Republican Congressman by the name of Paul Ryan and neo-Ayn-Randian Senator Rand Paul. (Paul Ryan, Rand Paul—could they be the same person cleverly occupying the House and the Senate simultaneously? The possibility cannot be ruled out.) 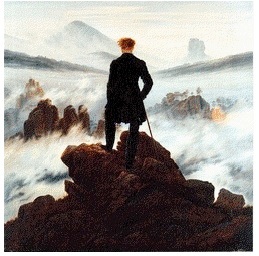 Representative Ryan contemplates the fiscal cliff in 2012? (Detail from the painting “Wanderer above a sea of fog.”) Turns out there was nothing for him to see.

President Obama himself felt sufficiently moved by the Cassandra-ite chorus to plunge whole-heartedly into the daunting task of cleaning up the budget mess (which he caused, as we all know). All of this desperate scrambling to reduce the burgeoning deficit and debt sought to postpone the evil day when “financial markets” would wreak their havoc on the spend-thrift Obama government.

I revisit this angst over deficits and debts because, surprising as it may seem, the deficit is mysteriously going away. The chart below demonstrates what Arthur Conan Doyle might have titled “the curious incident of the deficit that failed to bite.” In late 2009, the overall fiscal balance of the federal government rose to the annual equivalent of almost $1.5 trillion, nearly 11% of gross national product (GDP). Three years later the deficit fell to $1 trillion (end of 2012), and at the end of last month barely exceeded $500 billion (just 3% of GDP). It seems on track to drop to 400 billion by the end of this year (see Bloomberg News).

So what happened to drag the deficit back from the “fiscal cliff” (checkout my Real News Network interview on this supposed “cliff”)? Did painful but courageous cuts in “entitlements” and other expenditures prevent the U.S. government from swan-diving off the edge? The answer is NO; expenditure cuts did not reduce the deficit. As the chart below shows, federal expenditure in 2014 is hardly different from what it was at the end of 2009, and the deficit is $1 trillion lower!

There is a simple explanation. The federal deficit is down by one trillion because revenue is up by one trillion. This revenue increase did not occur because tax rates were raised. In 2007, just before the crisis hit the fan (so to speak), federal revenues were 17.9% of GDP, and the Congressional Budget Office projects the share for this year at 17.6%.

Federal budget deficit and expenditure by quarter, 2001-2014 (billions of dollars) 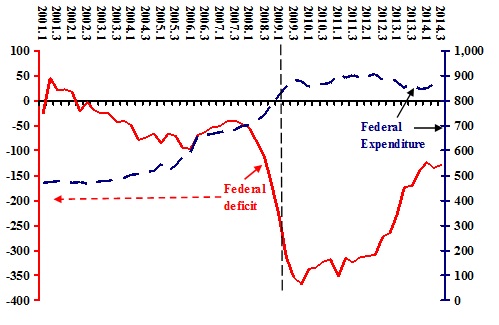 The deficit is down because GDP is higher. By definition, increases in GDP (national income) occur because household and business incomes rise. With no change in tax rate, federal revenue increases when these incomes rise. The deficit declined because the economy expanded, not because “entitlements” or any other expenditure was cut.

Unless the president does something extremely foolish such as dropping the odd trillion dollars on another war (and “dropping” seems the appropriate word), I can confidently predict that the federal deficit will change to a surplus by the end of his term.

Continuing to set the record straight, I point out that the failure to increase federal spending has prolonged the recession and stagnation of the U.S. economy. Yes, you read that correctly—increase. Since revenue rises with growth, we could have the present deficit, 3% of GDP, with a much higher level of household income and lower unemployment had expenditure not flat-lined during 2009-2014. More expenditure, more growth, which would have prevented the deficit from rising as a share of GDP.

My argument is not some expenditure variant of what the first Bush correctly called “voodoo economics” (aka Reaganomics), which alleged that cutting tax rates would not reduce tax revenue. The second Bush managed definitively to refute this right wing flight of fantasy when he cut taxes for the rich. (Surprise! Revenue fell.) In order to reduce deficits absolutely without changing tax rates, an increase in public expenditure must provoke an increase in private investment.

However, this is an indirect effect. Public spending increases employment and household incomes. The subsequent increase in household demand can stimulate more private investment if the idle production capacity resulting from a recession declines. We have many examples of this process by which public expenditure “crowds-in” private investment, but it does not occur automatically. What does occur automatically is a rise in tax revenue when public expenditure increases private incomes.

Reactionaries dismiss this expenditure-growth-tax linkage by saying it is nothing but “Keynesian economics.” I wonder, when they are told that water runs downhill do they shrug and say, “just Newtonian nonsense”?

As a result of the lies by reactionaries about approaching deficit disaster, and the equally reactionary failure of the Obama government to challenge those lies, the recovery of the U.S. economy has been slow and halting. GDP actually fell in the first quarter of this year (then recovered in the second). The chart below shows the consequence for those in and those out of work. Six years after the recession began, inflation adjusted private weekly earnings have risen by only 4%, and total unemployment is still over a percentage point higher than in 2007. Not since the depression of the 1930s has unemployment declined so slowly.

Percentage point differences from the first quarter of 2008, Real Average Weekly Earnings (RAWE) in the private Sector and the unemployment rate, 2008-2014 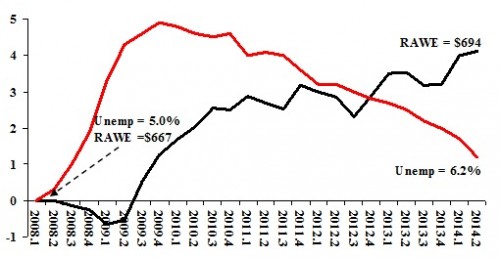 The power of the fake-economic (“fakeonomic”) ideology that serves the 1% so well is impressive. Simple, easily available statistics unfiltered by any slight-of-hand faux-technical manipulations tell a clear story. The fiscal deficit of the United States resulted from the contraction of national income at the end of the 2000s. Reckless speculation due to foolish deregulation of financial corporations caused the contraction. Yet we are told that savage cuts in social expenditures are necessary to prevent those same corporations from speculating on public bonds.

There is a word in Yiddish, “chutzpah.” The favorite way to show the meaning of the word is to tell the story of a boy who murders his mother and father, then pleads to the court for leniency because he is an orphan. Now, we have a better example. The financial crooks that caused the collapse of the economy and explosion of the deficit warn us against speculation against the public debt unless we cut the few public sector funded social benefits that we have.

Sources: Statistics: Department of the Treasury (http://fms.treas.gov/mts/index.html) & Economic Report of the President 2014 (http://www.gpo.gov/fdsys/browse/collection.action?collectionCode=ERP) and Bureau of Labor Statistics (http://www.bls.gov/data/).