Rising inequality is now a concern on everyone’s minds, even amongst the rich. Unequal societies are actually more unpleasant and dangerous for everyone, not just for those deprived by the system. High and rising inequality can be dysfunctional for the economy: for example, many now argue that growing inequality and the suppression of wage incomes combined with the effects of financial deregulation to generate the Global Financial Crisis of 2008, and that the subsequent poor performance of most economies is related to the slow and limited recovery of labour incomes. Policy makers seem to recognise that addressing inequalities is important not only for justice and social cohesion, but also for continued material progress.

This may partly explain the recent proliferation of academic studies on global and national inequalities, as well as the numerous reports on the subject that have come from UN organisations and other multilateral organisations. The huge media attention devoted to one academic study—Thomas Piketty’s Capital in the 21st Century—is a sign of the times. The spotlight that is shone on the rising share of incomes of the rich and the substantial empirical data that have been brought to bear on establishing this are indeed welcome.

But that book, like many other recent analyses of inequality, tends to ascribe some sort of inevitability to the process, as the result of the working of some inexorable economic forces. Piketty, for example, argues that there is a general tendency for wealth and income inequalities to increase because the rate of return on capital tends to exceed the rate of growth of the economy. There are various analytical concerns with this formulation, which relies on assumptions of full employment over the process of economic expansion and returns to factors like capital being determined by their marginal productivity (itself a problematic concept that is also impossible to measure).

Various analysts have attributed this trend of falling wage shares to the impact of labour-saving technological change, as well as the globalisation of trade and production, both of which have dramatically reduced the bargaining power of labour relative to capital. Technological change has also increased wage dispersion in many instances, thereby generating more wage inequalities as well. Some observers have pointed to the effects of financialisation in increasing the share of rentier incomes and enabling policies that serve financial interests rather than those of society at large. 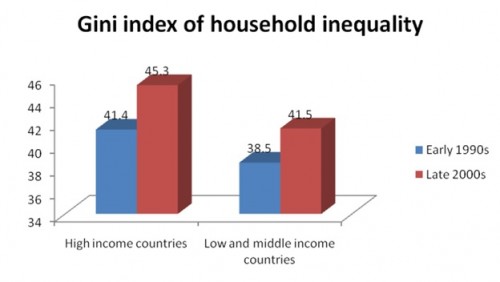 However, these shifts cannot be ascribed purely to economic forces, since domestic social and political forces and policies also play important roles. Indeed, the last point highlights the important role of policy and the political economy that determines policies that affect income and asset distribution.

In the developed countries, the declining emphasis on welfare states has been associated with the weakening of institutions and regulations that could protect workers and therefore the labour share of incomes. In developing countries, the perceived need to provide incentives to large private capital for generating investment and thereby growth, as well as drives for fiscal stabilisation, have also operated in the same way.

But the important point is that not all countries show the same trends and not all governments have behaved the same way. Chart 2 shows that the aggregate measure of inequality the Gini index has moved in different ways in the various major regions of the developing world. In two major regions – Africa and Latin America and the Caribbean – the recent period has in fact witnessed a significant decline in inequality, though it is to be noted that these were already the regions with higher inequality to start with. By contrast, there have been very significant increases in inequality in the transition economies of Europe as well as in Asia. 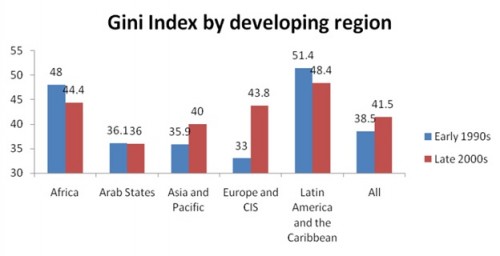 Even looking at regions is obviously too broad given the huge diversity within these large geographical spaces. Table 1 provides a further disaggregation, indicating the number of countries where inequality has increased or decreased and the average rate of change across these.

Yves here. In the wake of increased debates over rising inequality, particularly income inequality, many economists take the point of view that high levels of disparity are a state of nature. But that’s a terribly uninformed way to look at the question. Economies of any complexity are not natural; even modern capitalism comes in many forms. This post looks at developing economies that have done a better job of dampening inequality to see what they have in common.

It is evident that Latin America particularly stands out in terms of number of countries experiencing significant reduction of inequality. Some of the policies followed in countries of Latin America (and now some in Africa as well) are therefore worth noting.

Fiscal policies operated to reduce inequality through progressive income taxation and highly redistributive social transfers targeting education and health spending as well as public child and old-age benefits. There were increases in formal employment, led by significant increases in public employment, through the expansion of and improvement of quality in public services in areas such as health and education, as well as through “in-sourcing” activities that were earlier outsourced to private companies by governments. Wage gaps between skilled and unskilled workers were reduced by increases in educational access and enrolment, and this contributed to the recent drop in income inequality. Legal minimum wages rose through most of the 2000s, and in some countries like Brazil they more than doubled in real terms. Incidentally this also reduced gender wage gaps, since women workers tend to be clustered in the lower end of the wage distribution, at and around the minimum wage.

Reviving institutions and regulations such as labour unions, employment protection, minimum wages, unemployment benefits and regulation with respect to firing played an important role in moderating wage inequalities and improving wage shares of national income. So even in heavily “globalised” economies operating broadly within market capitalism, domestic policies can still be effective in shaping patterns of inequality and causing some declines. Rising inequality is therefore not inevitable — it is a political choice.