The IEA dropped a little bombshell yesterday by ‘fessing up that the economic prospects for Europe and China are so crappy that the outlook for oil prices is less than robust, even with the US bristling to go after its new favorite Middle Eastern nemesis, ISIS. The Financial Times was blunt: International Energy Agency notes ‘remarkable’ oil demand growth fall. From its article:

The world’s appetite for crude oil slowed at a “remarkable” pace during the second quarter because of weak economic growth in Europe and China, prompting the International Energy Agency to revise lower its demand forecasts for 2014 and 2015.

In its widely followed monthly report, the west’s energy watchdog said on Thursday that global oil demand growth had slowed to below 500,000 barrels a day in the three months to June – the first time it has reached this level in two-and-a-half years.

Slowing demand and plentiful supplies – in spite of conflicts raging in countries such as Iraq and Libya – have together pushed down the price of Brent crude, the international oil marker…

“Oil is a leading indicator, so maybe the global economic recovery is weaker than we think,” said Antoine Halff, author of the report. “At the same time you can see more structural changes in consumer behaviour and a shift towards more efficient technologies trickling through the numbers.”

Brent crude has now dipped below $100 per barrel, for the first time in over a year. WTI is trading around $92 per barrel, a 16-month low.

Prices have dropped for a few reasons.

ISIS’s advance has come to a halt and fears that Iraq’s oil production would be affected have abated.

Libya has brought some of its oil back online, with August production averaging around 538,000 barrels per day (bpd) — more than double its average daily production from June. Libya’s National Oil Corporation says that production is now topping 800,000 bpd and could exceed 1 million bpd in October.

U.S. oil production also continues to rise. In June, the U.S. produced 8.5 million bpd, an increase of 500,000 bpd since the beginning of the year. Higher production continues to cut into imports, leaving greater supplies on the global market.

Perhaps most importantly, global demand has been surprisingly lackluster. The latest data from the U.S. Energy Information Agency (EIA) shows that refined product (gasoline, for example) inventories are increasing – an indication that production is overwhelming consumption. 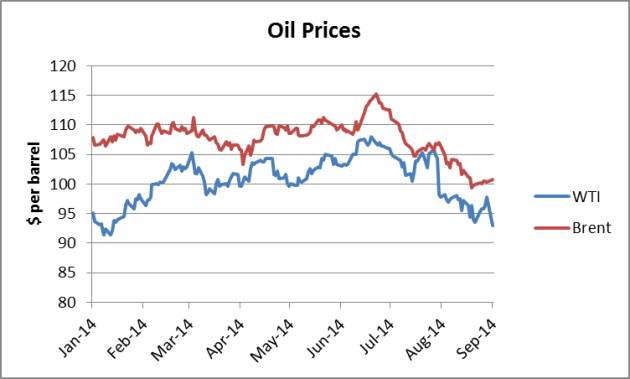 The glut of supplies and weak demand is causing problems for OPEC, according to the cartel’s monthly report. OPEC lowered its demand projection for 2015 by 200,000 and in August, Saudi Arabia cut production by 400,000 bpd in an effort to stem oversupply.

As noted by Steve LeVine in Quartz, cheaper oil could present problems for oil producing countries, which generally rely on high prices to keep their national budgets in the black.

Iran, for example, needs a price of $136 per barrel to pay for its current levels of public spending. Other countries – Nigeria, Ecuador, Venezuela, Iraq – are all facing looming budgetary problems as their required “breakeven” prices are higher than what oil is currently selling for on the market.

Russia needs between $110 and $117 per barrel to finance its spending, which means the Kremlin can’t be happy as it watches Brent prices continue to drop. Combined with an already weak economy, Russia could see its $19 billion surplus become a deficit by the end of the year.

It isn’t just some of the West’s favorite baddies, as well as the Saudis, that have a problem with weaker oil prices. It exposes the conflict that $100 a barrel for oil may be the minimum ongoing price that works for the majors, but even that price is too high for economies that are struggling to generate what they deem to be adequate levels of growth. Joe Costello, author of Of, By, For, explains via e-mail:

As growth has slowed most everywhere, it has taken the demand pressures off. This is particularly true of China, which for the past decade and half has been far and away the greatest demand growth. But as good as numbers are for this, China’s oil growth has been stagnant this year. The real proof of this is that in the last few weeks there’s been a growing number of stories of whole lot of surplus in the spot market.

The real question is how low could it go. If you remember in 2009 during money crisis, oil prices dropped to high $30s before the producers were able to catch it and bring it up to the mid $60s. It held for a year and half or so and then started to drift up. In 2011 the House of Saud said $100 is a good number and thats where it has been. Now two things about that, one is part of the reason, and an extremely important one: the global economy remains stagnant is it was built on cheap oil and can’t run how it was running on $100 a barrel.

Second and now even more important, the last year the oil companies have come out saying they can’t find and produce new oil profitably at $100 and the shale people, and the hour gets later every day on that boom, haven’t shown they can make a profit at $100, so certainly not on $90 or less.

Which gets to the point, what price of oil? Right now the spot guys are playing with price and for short periods, they have the ability to jack it around like in 2008 when they bought it up to $147 and then down to high $30s next year, but they can only do that for a limited time. The one thing for sure the longer it stays below $100 the more pain the industry is going to feel, and if it gets much below $90 for any length of time, it’s going to pop the shale bubble. My guess is that wont be allowed, but you know the best laid plans of mice and industrialists….

Now in theory, cheaper oil should be a boon to stressed consumers, but the oil development/shale gas boomlet has given a lift to the Rust belt. So if this readjustment proves to be meaningful, it will produce some real cross currents in the US.