Friday’s rotten jobs report got me thinking. Hurricane Katrina, of course, destroyed what little reputation the Bush administration had for competence or empathy, along with much of New Orleans. But even now, after the latest recovery summer under the Obama administration, the number of permanently disemployed[1] — I say unemployed in the headline to appease the Google gods — is about the same as the population of Los Angeles, 3.88 million. Washington Monthly:

Long-term unemployment is a terrifying trap that, even in the best of times, is difficult to escape. And it’s a trap that you can get stuck in for no reason other than bad luck.

1. As former CEA Chair Alan Krueger found, the long-term unemployed aren’t much different from the short-term unemployed. They’re a little older and more of them are African-Americans, but they’re just about as educated and work in the same industries as everyone else who’s trying to find a job.

2. The long-term unemployed have a hard time getting companies to even look at their job applications, let alone hire them. Rand Ghayad, a labor economist at Northeastern University, has tested this: he sent out thousands of fictitious resumés that were basically identical except for how long they said they’d been unemployed and what field they’d been in before. The results? Employers preferred people without any relevant experience but who’d been unemployed less than six months to people with experience who’d been unemployed longer than that. In other words, how long you’d been out of work trumped all else.

3.There’s never been this much long-term unemployment before, at least not since they started keeping records in 1948.

It’s as if the entire city of Los Angeles suddenly vanished mysteriously, silently blown off the face of the earth, except nobody who seems to have wondered what happened to the people. That’s why long-term and permanent disemployment is Obama’s Katrina. It shows Obama has exactly the same flaws Bush did: Lack of competence[3], and lack of empathy.

And it’s bad out there.[2] How bad is it? As I wrote in 2011 (“Normalizing Disemployment Considered Harmful”): 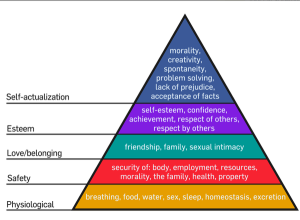 It’s important for all humans with access to policy making — and that includes some, at least, of our “friends,” the career “progressives” — to understand that DISemployment really does cause people to die. Using DISemployment as a policy tool kills workers just as effectively as the radiation in the plant at Fukushima, although less directly, and not on the nightly news. And like radiation*, DISemployment is no less lethal for being invisible.

It’s all about Maslow’s pyramid of needs. (And isn’t it always?) For those in the top 1%, there may indeed be “shared sacrifice,” but the “sacrifice” comes from the apex of Maslow pyramid: Loss of opportunity for “self-actualization” in the form of bonuses (“Just a way of keeping score”), the sale of a second or third home, a postponed yacht (but no more!), or scaled-back cosmetic surgery…

So it’s clearly immoral — taking, say, the teachings of major religions as a proxy for morality — to crash the economy, whether motivated by greed and even if “doing God’s work,” as the FIRE sector did with the housing bubble. But it’s also immoral, brutal and inhumane, to regulate the economy by “taking away the punchbowl” and disemploying hundreds of thousands or even millions of working people.

But what I want to know is this: What happened to them? What are the disemployed doing with their time? How do they survive? So far as I can tell, we just don’t know. (It’s as if we need anthropologists, but we have economists.) Here is the table of contents from a study of long-term unemployment by the Urban Institute:

What are the disemployed doing with their time? No answers here. (The only candidate for such information is the Chapter 6, “Recent Changes; I read it; nada.) Here’s another study, from Congress’s Joint Economic Committee, “Long-Term Unemployment in the United States”:

There are many possible explanations for why people have continued to look for work despite being unemployed for extended periods of time, including the extension of unemployment insurance benefits, reductions in household wealth associated with declining home values and equity markets and a reluctance to accept a lower-paying job — especially among highly skilled workers. The extension of unemployment insurance benefits during the past four years likely played a role in keeping some unemployed work ers, including the very-long-term unemployed, searching for work. Many workers simply cannot afford to give up searching for employment. Even for households where a spouse or other family member is employed, wages have remained largely stagnant while typical household expenses — food, clothing, health care and education continue to rise.

What are the disemployed doing with their time? No answers here, although we do have some theories about what might motivate them to spend some fraction of their time looking for work (or not).

Here’s another study, from the National Employment Law Foundation, again in 2013: “Scarring Effects: Demographics of the Long-Term Unemployed and the Danger of Ignoring the Jobs Deficit”. I read it all. What are the disemployed doing with their time? No answers.

Three studies is enough excitement for a Saturday night, and I bet if I read thirty, I’d find the same kinds of information: Demographics, occupation, education, age, gender, etc. But no indication of what the disemployed are doing with their time. Why, it’s almost as if the time of wage workers is of interest or has value only insofar as they are human resources and not people!

If I had to guess — and in fact, I do have to guess — what the disemployed are doing with their time, I would guess that some large fraction of the disemployed have entered System D, a style of employment familiar in other third world countries:

System D is a slang phrase pirated from French-speaking Africa and the Caribbean. The French have a word that they often use to describe particularly effective and motivated people. They call them débrouillards. To say a man is a débrouillard is to tell people how resourceful and ingenious he is. The former French colonies have sculpted this word to their own social and economic reality. They say that inventive, self-starting, entrepreneurial merchants who are doing business on their own, without registering or being regulated by the bureaucracy and, for the most part, without paying taxes, are part of “l’economie de la débrouillardise.” Or, sweetened for street use, “Systeme D.” This essentially translates as the ingenuity economy, the economy of improvisation and self-reliance, the do-it-yourself, or DIY, economy. …

What happens in all the unregistered markets and roadside kiosks of the world is not simply haphazard. It is a product of intelligence, resilience, self-organization, and group solidarity, and it follows a number of well-worn though unwritten rules. It is, in that sense, a system.

It used to be that System D was small — a handful of market women selling a handful of shriveled carrots to earn a handful of pennies. It was the economy of desperation. But as trade has expanded and globalized, System D has scaled up too. Today, System D is the economy of aspiration. It is where the jobs are. In 2009, the Organisation for Economic Co-operation and Development (OECD), a think tank sponsored by the governments of 30 of the most powerful capitalist countries and dedicated to promoting free-market institutions, concluded that half the workers of the world — close to 1.8 billion people — were working in System D: off the books, in jobs that were neither registered nor regulated, getting paid in cash, and, most often, avoiding income taxes.

Kids selling lemonade from the sidewalk in front of their houses are part of System D. So are many of the vendors at stoop sales, flea markets, and swap meets. So are the workers who look for employment in the parking lots of Home Depot and Lowe’s throughout the United States.

Noteworthy in all the studies above is the failure to recognize that the disemployed have agency; that they might take action of some kind to better their condition, but outside the formal sector that has failed them so badly. I know people doing just that, and I bet you do, too. (Of course, if you have confirming, or disconfirming evidence for this hypothesis, I’d love to hear about it in comments.)

If my thesis is right, there are at least two consequences:

1) ObamaCare is going to **** débrouillards over hard, because of its income predicting and reporting requirements. How in the name of sweet suffering Jeebus is a guy trying to cobble together an income out of yard sales, eBay, and home repair (say) supposed to predict his income? It’s demented.

2) System D fits quite neatly into the systems offered by the so-called sharing economy; for example, those who haven’t lost their homes, yet are located in the right areas, would be very happy to pick up a few bucks renting their rooms. Services like TaskRabbit are an even closer match. I like this idea, since it would mean the “sharing economy” squillionaires are in fact parasites, skimming, scaling, normalizing, and taking a cut in rent to provide services for social relations already invented in System D.

[1] I prefer to say “disemployed” rather than “unployed” because disemployment, like disempowered or disrespected, implies agency on the part of those doing the dissing. Disemployment not some sort of natural event that just happens; it’s a social construct, in fact the preferred policy option of elites, as evidenced by the fact that other policy options that return us to full employment, like a Jobs Guarantee, aren’t even on the table. You may not like those options, but options they are.

[2] I know there are distinctions that are important to statisticians between the long-term disemployed, who are still in the work force, and “discouraged workers,” who are not. The Urban Institute writes:

The Bureau of Labor Statistics classifies individuals as unemployed if they are without a job but have been actively looking for one in the preceding four weeks. If individuals have been searching for a job for 27 weeks or longer, then they are considered long – term unemployed. As a comparison group, we refer to unemployed workers who have been searching for a job for fewer than five weeks as “newly unemployed.” Together, all unemployed and employed workers age 16 and older make up the labor force. Outside the labor force, there are also many workers who have lost their jobs and have given up searching. Although these discouraged workers are not officially considered part of the labor force, many would like to return to work if given the opportunity. Discouraged workers are defined as those not currently in the labor force because they do not believe jobs are available, but who have actively searched for a job in the past year.

From the wage worker’s perspective, these are distinctions without differences. “No job and no money” equals “no job and no money” at 25 and 28 weeks. And if I got a job part-time job at Walmart restocking shelves after, say, having a good job at the mill, I could mighty “discouraged,” which is why the “discouraged workers” language always grates on me. So for the purposes of this post I’m going to put the two populations in one class.

[3] “Competence” in the sense of running the executive branch to promote the general welfare, or to take care that the laws be faithfully executed, and other such public purpose expectations. Both Bush and Obama are highly competent and very effective in other areas; just at in the duties that they were (in Bush’s case, ostensibly) elected to perform.