Yellen expresses “great concern” on “income inequality” at Boston Fed conference on said topic, and lists “four building blocks” for “gains in income and wealth”: (1) “Resources Available for Children”; (2) “Higher Education that Families Can Afford”; (3) “Opportunities to Build Wealth through Business Ownership”; (4) “Inheritances” [Board of Governors of the Federal Reserve System]. (5) Accounting Control Fraud; (6) Helicopter Drops (6). Fixed it for ya. So where’s mine?

Questions real reporters should be asking Texas Presbyterian [Steven Brill, Reuters]. Here’s a good one: “How, in fact, are the bonuses at Texas Health determined?”

WHO: “Nearly everyone involved in the outbreak response failed to see some fairly plain writing on the wall” [Guardian]. Well, except for Médecins Sans Frontières, Cassandras for both WHO and the CDC.

CY Leung: “The Hong Kong … government cannot make something that is not in the Basic Law possible” [Christian Science Monitor].

And on the mainland, conflict over land in Kunming [New York Times]. From the details, there weren’t many “study areas” set up…..

St Louis Mayor agrees to meet with protesters after 60 protesters hang banner in City Hall [Riverfront Times]. Here are the demands of Young Activists United, which will be in attendance:

The group wants Slay to force police officers who have “any interaction with the public” to wear body cameras, establish a civilian review board and independently investigate all fatal police shootings. The group also asked Slay to break ties with the federal government’s 1033 program, which sends military hardware to police departments. Maggie Crane, the mayor’s chief spokesperson, tells Daily RFT that the city has no relationship with the program.

Quite moderate! How about turning any existing armored vehicles into planters in city parks and letting them rust out? Notice also how the protests have scaled out to St Louis as a whole. Impressive.

St Louis cop Keith Novara placed under investigation for calling protester’s boss because of protester’s “inciteful” tweets [St Louis Today]. But he’s not suspended. So, citizen harrasment is departmental policy, then? (If you want to hear the followup conversation between protester and cop, before this became a story, see yesterday’s Water Cooler.)

Detail on the stately pace of the Darren Wilson grand jury [Vox].

Is Martha Coakley the Bill Buckner of Massachusetts politics? [Politico]. Coakeley as Massachusetts Attorney General took Goldman Sachs for $20 million in fines, and didn’t run on that in 2010, blowing the race. So, no, she’s not. Bill Buckner couldn’t choose to play with two good ankles, but Coakley chooses not to run on her one good issue. Unfortunately, the Ds have no late inning defensive replacement.

Readers, feel free to contact me with (a) links, and even better (b) sources I should curate regularly, and (c) to find out how to send me images of plants. Vegetables are fine! Fungi are deemed to be honorary plants! See the previous Water Cooler (with plant) here. And here’s today’s plant, at Thompson Wildlife Refuge in Markham, VA: 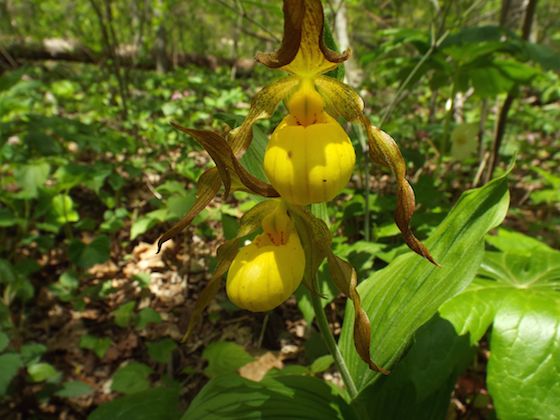