This is Naked Capitalism fundraising week. 671 donors have already invested in our efforts to shed light on the dark and seamy corners of finance. Join us and participate via our Tip Jar, which shows how to give via credit card, debit card, PayPal, or check. Read about why we’re doing this fundraiser, what we’ve accomplished in the last year, and our current target.

The transition from an epoch of stagnation to an era of sustained economic growth has triggered one of the most significant transformations in the course of human history. While living standards stagnated for millennia before the Industrial Revolution, income per capita has seen an unprecedented twelvefold increase over the past two centuries. This has profoundly altered the level and distribution of education, health, and wealth across the globe (Maddison 2001).

Over most of human existence the forces of natural selection shaped the composition of the population. Lineages whose traits were complementary to the economic environment generated higher income and thus higher reproductive success. The gradual propagation of growth-enhancing traits has presumably contributed to development and the take-off from stagnation. In particular, it is hypothesized that during the epoch of stagnation, natural selection increased representation of traits associated with predisposition to offspring quality. This evolutionary process fostered human capital formation and contributed to the reinforcing interaction between investment in human capital and the technological progress that triggered demographic transition and sustained growth (Galor 2011, Galor and Moav 2002).

Our recent research explores the biocultural origins of human capital formation and economic growth (Galor and Klemp 2014). It presents the first evidence that moderate fecundity (and thus predisposition towards investment in child quality) was conducive to long-run reproductive success within the human species. It further suggests that individuals with lower than median levels of fecundity enjoyed an evolutionary advantage in the pre-demographic transition era. These findings lend credence to the hypothesis that during the epoch of stagnation, natural selection favoured those with lower fecundity and larger predisposition towards child quality, contributing to human capital formation, demographic transition, and growth.

Evidence from Extensive Genealogy of Half a Million Individuals in Quebec

Using an extensive genealogical record for nearly half a million individuals in Quebec between the 16th and the 18th centuries, we examine the effect of fecundity on number of descendants in the subsequent four generations for early inhabitants of the Canadian province. In light pre-industrial Quebec’s social norm observed in which marriage marked the intention to conceive (Figure 1), the research exploits variation in the random component of the time interval between the date of first marriage and the first birth in order to capture the effect of fecundity on fitness. 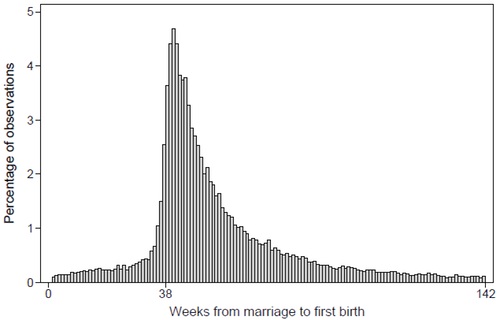 The histogram depicts the durations (in weeks) from first marriages to first births of 53,154 mothers in Quebec between the 16th and the end of the 18th century who gave birth between the 7th and 728th day of their marriage.

The research mitigates hurdles in the identification of the effect of fertility on long-run reproductive success by focusing on the effect of fecundity, rather than fertility. Furthermore, it designs an empirical strategy that exploits the inherent uncertainty in the process of human reproduction for identification. Since fecundity reflects genetic and socio-environmental factors, the time interval between the date of first marriage and first birth is affected by genetic predisposition, socio-environmental conditions, and the realization of random elements that affect conception. Accounting for a range of genetic and socio-environmental confounding factors that may affect reproductive success, the timing of first birth, and the quality of offspring, the study attempts to isolate the effect of the random variations in time from marriage to first birth across individuals. In particular, genetic, as well as cultural and socio-economic factors that may affect fecundity are accounted for by the inclusion of maternal founder fixed effects. We identify the effect of fecundity on reproductive success based on variations in reproductive success among siblings, capturing the similarities in the genetic predisposition of these genetically linked individuals, as well as their cultural and socio-economic proximity.

Figure 2. Fecundity and the number of descendants in subsequent generations 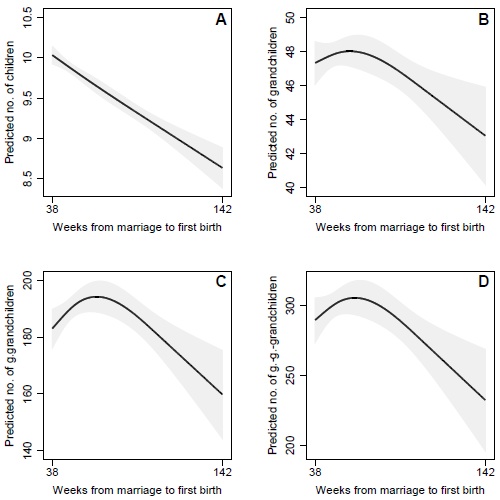 Note: Predicted number of descendants with 90% confidence interval as a function of time from marriage to first birth based on restricted cubic splines for 3,798 heads of lineages.

Implication for Human Capital Formation and the Transition to Modern Growth

The evidence from pre-industrial Quebec suggests that natural selection favoured individuals characterized by moderate fecundity, increasing the population’s predisposition towards investment in child quality. Interestingly, the conditions faced by the f of Quebec during this high-fertility time period resemble the environment that anatomically modern humans confronted during their migration out of Africa, as they settled new territories where the carrying capacity of the new environment was an order of magnitude greater than  the size of the founder population. The findings support the hypothesis that during the epoch of stagnation, natural selection favoured individuals with a larger predisposition towards child quality, contributing to human capital formation, the onset of the demographic transition, and the evolution towards sustained economic growth.

Maddison, A (2001) The World Economy: A Millennial Perspective, OECD, Paris.