It’s remarkable that this Goldman report, and its writeup on Business Insider, is being treated with a straight face. The short version is current stock price levels are dependent on continued stock buybacks. Key sections of the story:

Goldman Sachs’ David Kostin believes a temporary pullback may explain why the S&P 500 has tumbled from its all-time high of 2,019 on Sept. 19.

“Most companies are precluded from engaging in open-market stock repurchases during the five weeks before releasing earnings,” Kostin notes. “For many firms, the beginning of the blackout period coincided with the S&P 500 peak on September 18. So the sell-off occurred during a time when the single largest source of equity demand was absent. Buybacks dip during earnings reporting months, which have seen 1.2 points higher realized volatility than in other months during the past 25 years.”…

“We expect companies will actively repurchase shares in November and December,” he writes. “Since 2007, an average of 25% of annual buybacks has occurred during the last two months of the year.” 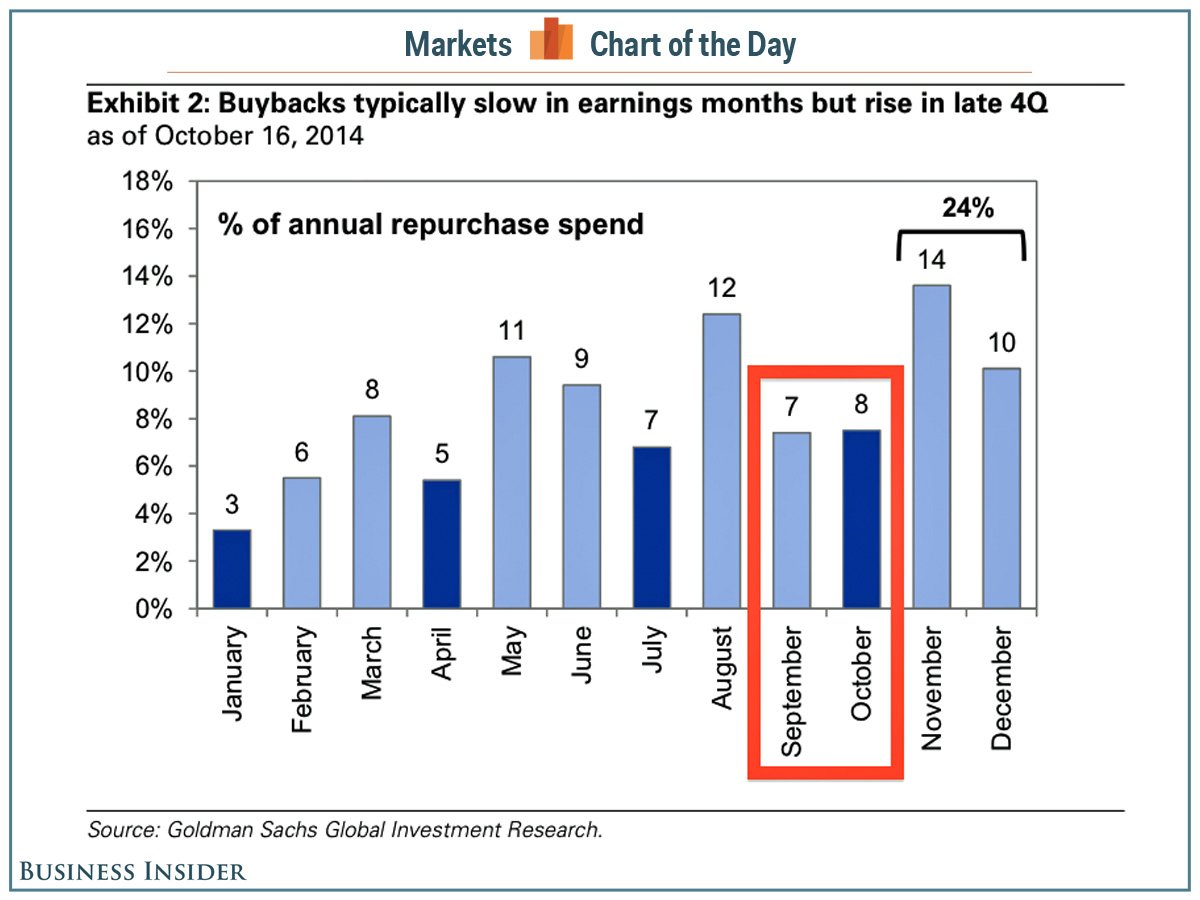 Notice how the bulk of buybacks are concentrated in the fourth quarter, with the obvious intent of goosing prices at year end so as to lead to higher executive pay for “increasing shareholder value”? In fact, these companies are being gradually liquidated. Issuing debt, which public companies have done in copious volumes since the crash, and using it to buy shares is dissipating corporate assets. They are over time shrinking their businesses. That is also reflected in aggressive headcount cuts and cost-saving measures. Even though analysts like to tout the cash that companies have sitting on their balance sheets as a source of potential investment, as we’ve discussed in previous posts, public companies are so terrified of even a quarterly blip in earnings due to incurring expenses relating to long-term investments that they’d rather do nothing, or go the inertial path of cutting costs to show higher profits.

But with borrowing the big source of this corporate munificence to the share-owning classes, this is a self-limiting game. But the end game could be a long time in coming. First, you have economists who believe that the stock market directly drives consumer spending, echoing the Fed’s confidence in the wealth effect. For instance, see this argument from Roger Farmer (hat tip Bruegel blog):

There is a close relationship between changes in the value of the stock market and changes in the unemployment rate one quarter later. My research here, and here shows that a persistent 10% drop in the real value of the stock market is followed by a persistent 3% increase in the unemployment rate. The important word here is persistent. If the market drops 10% on Tuesday and recovers again a week later, (not an unusual movement in a volatile market), there will be no impact on the real economy. For a market panic to have real effects on Main Street it must be sustained for at least three months.

Yves here. The problem is that correlation is not causation. Significant and sustained stock market declines are almost always the result of Fed tightening. The usual lag between an interest rate cycle turn and a stock market peak historically was roughly four months, but in our new normal of seemingly permanent heavy-duty central bank meddling, old rules of thumb are to be used with great caution. Nevertheless, Greenspan was obsessed with what drove stock prices, and the Fed is unduly solicitous of asset price levels, no doubt because people like Janet Yellen have to leave their DC bubble in order to meet actual unemployed people.

Mike Whitney reminds those who manage to miss it that the Fed is so concerned about the actual and psychological impact of stock market prices that it immediately talked investors into getting back into the pool when the market started misbehaving badly last week. From Counterpunch:

For those readers who still think that the Fed doesn’t meddle in the markets: Think again. Friday’s stock surge had nothing to do with productivity, price, earnings, growth or any of the other so called fundamentals. It was all about manipulation; telling people what they want to hear, so they do exactly what you want them to do. The pundits calls this jawboning, and the Fed has turned it into an art-form. All [St. Louis Fed President James] Bullard did was assure investors that the Fed “has their back”, and , sure enough, another wild spending spree ensued. One can only imagine the backslapping and high-fives that broke out at the Central Bank following this latest flimflam….

It’s too bad the Fed can’t put in a good word for the real economy while they’re at it. But, oh, I forgot that the real economy is stuffed with working stiffs who don’t warrant the same kind of treatment as the esteemed supermen who trade stocks for a living. Besides, the Fed doesn’t give a rip about the real economy. If it did, it would have loaded up on infrastructure bonds instead of funky mortgage backed securities (MBS). The difference between the two is pretty stark: Infrastructure bonds put people to work, circulate money, boost economic activity, and strengthen growth. In contrast, MBS purchases help to fatten the bank accounts of the fraudsters who created the financial crisis while doing bupkis for the economy. Guess who the Fed chose to help out?

Do you really want to know why the Fed isn’t going to end QE? Here’s how Nomura’s chief economist Bob Janjuah summed it up:

“I want to remind readers of a message that may be buried in the past: When QE1 ended, the S&P 500 fell just under 20% in a roughly three-month period before the QE2 recovery.

When the QE2 ended, the S&P 500 fell about 20% in a three-month period before the next Fed-inspired bounce (aided by the ECB). QE3 is ending this month…”

Is that why the Fed started jawboning QE4, to avoid the inevitable 20 percent correction?

Whitney continues with one of our favorite tropes: that all QE has done is elevate asset prices. That has not led to a recovery in anything much beyond the balance sheets of the top cohorts and the income of the top 1%. Even worse, it has provide cover for the Administration falling in with investor-favoring austerity, in the form of reducing deficit spending when it ought to be increasing it to take up the considerable and costly slack in the economy.

It’s not surprising to see the Fed double down on a failed strategy. The central bank had apparently finally recognized in 2013 that QE was not helping the real economy, and they needed to exit the policy to reduce the resulting economic distortions. But they lost their nerve during last summer’s taper tantrum, and turned cowardly again in response to a mere stock market hissy fit.

The Fed believes that what is good for the wealthy is good for the US, and that when they are in danger of suffering financially, the central bank should break glass and administer monetary relief. Even though the Fed may think it is serious about ending QE and eventually raising rates, as they say in Venezuela, “They have changed their minds, but they have not changed their hearts.”