For economists there is no price like home – at least not since the global financial crisis. Fluctuations in house prices, their impact on the balance sheets of consumers and banks, as well as the deleveraging pressures triggered by house price busts have been a major focus of macroeconomic research in recent years (Mian and Sufi 2014, Jordà et al. 2014, Shiller 2009). Houses are typically the largest component of household wealth and the key collateral for bank lending, and they play a central role in long-run trends in wealth-to-income ratios and the size of the financial sector (Piketty and Zucman 2014). Yet despite their importance for the macroeconomy, surprisingly little is known about long-run house price trends.

In our new paper (Knoll et al. 2014) we turn to economic history to fill this void. Based on extensive historical research, we present new historical house price indices for 14 advanced economies since 1870. Houses are heterogeneous assets, and great care is needed when combining data from a variety of sources in order to construct plausible long-run indices that account for quality improvements, shifts in the composition of the type of houses, and their location.

For the construction of the long-run database, we were able to build in part on the existing work of economic and financial historians such as Eichholtz (1994) for the Netherlands or Eitrheim and Erlandsen (2004) for Norway. In other cases we collected new information from regional and national statistical offices, central banks, tax authorities such as the UK Land Registry, and national real estate associations such as the Canadian Real Estate Association. We are indebted to many colleagues for their help and guidance in sorting through the historical sources.

The (unweighted) mean and median of the 14 house price indices are shown in Figure 1. Adjusted by the consumer price index, house prices in the early 21st century are well above their late 19th-century level, and increased in all advanced economies in the long run. Yet their trajectory is distinctive. Using the new dataset, we are able to show that they follow a hockey-stick pattern – real house prices remained broadly stable from the late 19th century to the mid-20th century, and increased strongly in the following decades. Real house prices have approximately tripled since 1900, with virtually all of the increase occurring in the second half of the 20th century, as Figure 1 shows.

We also find considerable cross-country heterogeneity in long-run house price trends. While Australia has seen the strongest, Germany has seen the weakest increase in real house prices. Moreover, in the paper we also demonstrate that urban and rural house prices as well as farmland prices display similar long-run trends. 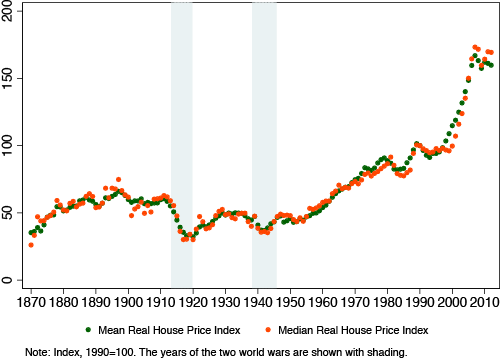 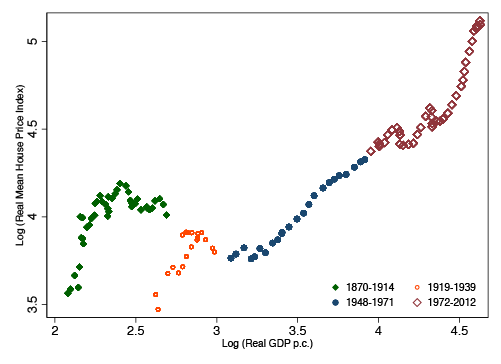 While construction costs have flat-lined in the past four decades, sharp increases in residential land prices have driven up international house prices. Our decomposition suggests that up to 80% of the increase in house prices between 1950 and 2012 can be attributed to land price appreciation alone. 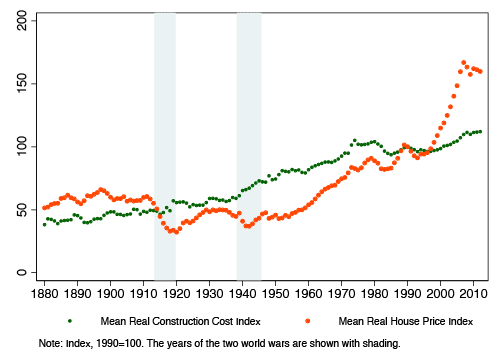 The pronounced increase in residential land prices in recent decades contrasts with the earlier period. During the first half of the 20th century, residential land prices remained constant in advanced economies despite substantial population and income growth. We are not the first to note the upward trend in land prices in the second half of the 20th century (Glaeser and Ward 2009, Case 2007, Davis and Heathcote 2007, Gyourko et al. 2006). But to our knowledge, it has not been shown that this is a broad-based, cross-country phenomenon that marks a break with the previous era. 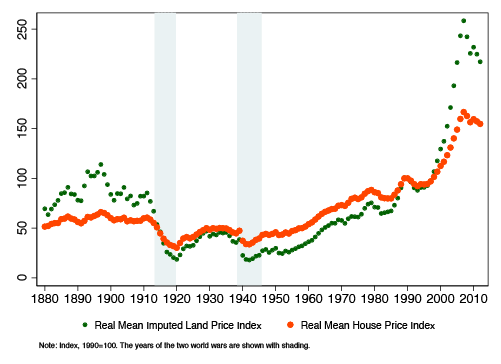 Note: Land prices derived from an accounting decomposition of house price trends into replacement value of the structure and land values.

What explains the fact that residential land prices remained stable until the mid-20th century and increased strongly thereafter? Our explanation focuses on the different dynamics in land supply in these two periods. From the 19th to the early 20th century, the transport revolution – mostly the construction of the railway network, but also the introduction of steam shipping – led to a massive and well-documented drop in transport costs (Jacks and Pendakur 2010). An important side effect of the transport revolution was to substantially augment the supply of economically usable land.

In the paper, we develop a model with land heterogeneity to demonstrate how a sustained decline in transport costs endogenously triggers an expansion of land, such that the land price may remain low despite continuous growth of income and population. We also show that this land-augmenting decline in transport costs subsides in the second half of the 20th century, so that land increasingly became a fixed factor.

At the same time, zoning regulations and other restrictions on land use also inhibited the utilisation of additional land in recent decades (Glaeser et al. 2005, Glaeser and Gyourko 2003), while rising expenditure shares for housing services added further to rising demand for land. Yet our stylised facts are also compatible with other explanations that help explain surging land prices in the past few decades, such as growing subsidies for home ownership or easy borrowing conditions (Mian and Sufi 2014, Jordà et al. 2014).

Our results have potentially important implications for the much-debated long-run trends in the distributions of income and wealth (Piketty and Zucman 2014).1 We offer a lens for reinterpreting Ricardo’s famous principle of scarcity. Ricardo (1817) argued that in the long run, economic growth disproportionally profits landlords as the owners of the fixed factor. Since land is highly unequally distributed across the population, market economies produce ever-rising levels of inequality.

Writing in the 19th century, Ricardo was mainly concerned with the price of agricultural land, and reasoned that as population growth pushes up the price of corn, the land rent and the land price would continuously increase. In the 21st century, we may be more concerned with the price of housing services and residential land, but the mechanism is similar. The decline in transport costs kept the price of residential land constant until the mid-20th century. The price surge in the past half-century could be an indication that Ricardo might have been right after all.

Case, K E (2007), “The Value of Land in the United States”, in G K Ingram and Y-H Hong (eds.), Land Policies and their Outcomes, Cambridge: Lincoln Institute of Land Policy.

Mian, A and A Sufi (2014), House of Debt: How They (and You) Caused the Great Recession, and How We Can Prevent It from Happening Again, Chicago: University of Chicago Press.

[1] We are grateful to Thomas Piketty for pointing this out.