When Alfred Sloan ran General Motors in Detroit, he supplied Nazi Germany with engine technology, assembly lines, and working capital for Messerschmidt and Junker warplanes, Panzer tanks, troop and gun transports, along with land mines and torpedo detonators. The Germans said they couldn’t have invaded Poland, Belgium, Holland, Norway, France, or Russia without him. Sloan was breaking US law at the time, so he destroyed the company records of his collaboration with Berlin. He also supplied the US war effort with comparable military technology, if a bit slower in the air.

World War II was a good business for Sloan. “The business of business is business” is a motto attributed to Sloan. He may not have said it. There’s no doubt he thought it.

Since March of this year the US Treasury has declared war on Russia, and through the Office of Foreign Assets Control (OFAC) it has ordered US businesses and banks not to collaborate. The European Union (EU) and other US allies, like Switzerland, Japan, Norway, Canada, and Australia, have been asked by Washington to implement the same measures. But the country sanctions lists aren’t quite the same. In the gaps and differences, a model of Russian business is emerging into plain light. A theory of the political succession in Russia, too.

For reports on the legality of sanctions against Russia, and the court rulings which have influenced the wording of EU sanctions, click. Legal challenges by Russians on the EU sanctions list are now under way in the European Court of Justice. A legal challenge in Canada resulted in the removal of two Russian banks for the Ottawa list — read here.

According to the American sanctions model, Russian businessmen who are believed to be personally close to President Vladimir Putin, have been designated on the lists. In March they were referred to as “members of the Russian leadership’s inner circle”. As the lists grew longer, the rationale was stretched too. Andrei Fursenko (right), a former education minister and currently a Kremlin adviser, was sanctioned for this reason: “although not being designated for being a member of the Russian leadership’s inner circle, Fursenko first met Putin in 1993 and they remain closely associated.”

But Fursenko is a government official, not a businessman. Russian officials, including military officers and members of parliament, have been targeted, according to Executive Order 13661, dated March 19, because the US president has “[found] that the actions and policies of the Government of the Russian Federation with respect to Ukraine—including the recent deployment of Russian Federation military forces in the Crimea region of Ukraine undermine democratic processes and institutions in Ukraine; threaten its peace, security, stability, sovereignty, and territorial integrity; and contribute to the misappropriation of its assets, and thereby constitute an unusual and extraordinary threat to the national security and foreign policy of the United States.”

Business figures like Vladimir Yakunin (below left), head of state-owned Russian Railways, have been designated because of proximity. In Yakunin’s case, the US says he has been “neighbors [with Putin] in the elite dacha community on the shore of Lake Komsomolsk and they served as cofounders of the Ozero Dacha Cooperative in November 1996.” 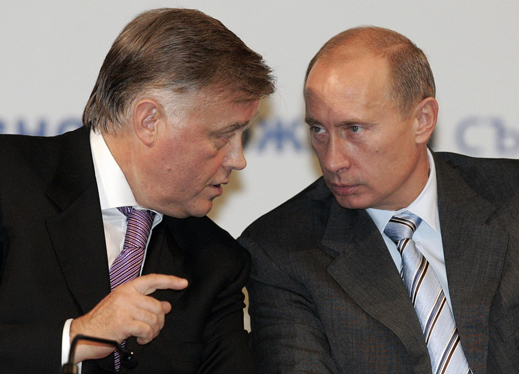 They are the Putin “cronies”. The White House, Treasury, and OFAC paperwork doesn’t use the term “cronies”. That was introduced by anonymous US officials briefing the press at the time President Barack Obama first introduced sanctions against Russians on March 20. UK Prime Minister David Cameron used the term “cronies and oligarchs” around Putin when announcing UK sanctions in July.

Cameron flubbed. There is all the difference in the world between cronies and oligarchs, and British sanctions policy carefully observes it. So does US policy.

The Russian oligarchs who control most of Russia’s strategic energy, mineral, and metal assets – the resources required for Russian to field and fuel its armed forces – are not sanctioned. Not even those oligarchs known to be especially favoured, even personally close to Putin, like Oleg Deripaska, (below left) control shareholder of the aluminium monopoly, Rusal; and Roman Abramovich, (right) control shareholder of the Evraz steel and coal group.

Russian oligarchs controlling US assets worth several hundred millions of dollars include two with well-known political ambitionsto replace Putin – Mikhail Prokhorov and Anatoly Chubais. Neither qualifies as a familiar or a crony of Putin’s. So far, Washington and Brussels have left them unscathed.

Well-known Novorussian supporter and former military commander in the Donbass, Igor Strelkov (Girkin) – himself sanctioned by the US and the EU – has mentioned “homegrown oligarchs” as part of a “Fifth Column” plotting against Putin and the “financial and economic health of the country [as they] try to shift the resulting costs [of sanctions] to the general population.” According to Strelkov, “it’s an either-or situation, either Russia fully restores its real sovereignty, or it will be destroyed by the coalition of oligarchic clans, both internal and external.” For Strelkov’s full remarks on September 11, click.

Strelkov hasn’t (yet) identified the oligarch clans he is targeting. He is believed by Russian sources and Novorussian media to include officials Vyacheslav Surkov (right), Igor Shuvalov, and Mikhail Abyzov. At least one of these, Abyzov, is believed to have helped finance Dmitry Medvedev’s campaign in 2012 to keep the presidency. His US assets are reported here.

They are missing from the list of US designated and sanctioned individuals and entities, which can be researched alphabetically here.

Washington makes special exceptions, quietly. For example, Sberbank owns 50% or more of the private Turkish bank, DenizBank, and the terms of US sanctions on Sberbank ought to apply to such entities. However, on October 6 OFAC exempted DenizBank from the capital restrictions applying to Sberbank. Here is the exception. The Russian and Turkish media reported the move, and Reuters and Wall Street Journal followed. The Wall Street Journal reported intensive lobbying by Turkish government officials of their US counterparts. “Keeping the Turkish bank sanctioned would have had little impact on Sberbank but would have instead harmed the economy of a partner country, a U.S. official said” – according to the Journal.

A comparison of the individual Russian names on the sanctions lists (current to the start of this month) reveals that the US has targeted Yakunin and Igor Sechin, chief executive of Rosneft, but the EU list omits them. Yakunin and Sechin are potential presidential or prime ministerial candidates, in the event Putin were to retire or replace Medvedev at the prime ministry. Another of the candidates allied with Putin, but opposed to Medvedev, is chief of the Kremlin staff at the moment, Sergei Ivanov. He is on the US proscription list; he is not on the EU list.

The EU list is heavy with Russian military officers, and the head of the Foreign Intelligence Service, Mikhail Fradkov; they are not sanctioned by Washington. One important name on the EU list is Konstantin Malofeev. The Swiss and Norwegians have also sanctioned him. Malofeev’s importance is that he is believed to be financing separatist units in Donetsk and Lugansk. This is so widely reported and believed among the allies, it is striking that Malofeev is not on the US list sanctions list.

Malofeev, who runs a Moscow-based asset holding called Marshall Capital, is not of oligarch size. His website describes his investment interests as “telecommunications, media and technology, as well as real estate and agriculture.” The UK High Court provides an intimate record of Malofeev’s interests in agriculture because he has been sued in London for $225 million in fraud by state bank VTB. That story can be read here. The record shows that VTB failed.

The Marshall Capital website also indicates that Malofeev “supports the Saint Basil the Great Charitable Foundation, established by Konstantin Malofeev in 2007, as well as a range of other cultural and social projects including the Safe Internet League.”

Malofeev makes no secret of his Russian loyalties (below left, wall portrait of Tsar Alexander III). No record can be found of Malofeev with either Putin or Medvedev. Below right is is the only photograph of Malofeev with a current Kremlin official. This one, seated to Malofeev’s left, is Igor Shchyogolev, a former telecommunications minister and currently an assistant to the president. Shchyogolev has been sanctioned by the US, but not by the EU.

Malofeev has defended his financial contributions in Crimea and Donbass as religiously-inspired philanthropy and humanitarian aid; he denies funding troop formations or military operations.

“I’m really a monarchist. My views were formed as early as 16 years old and since then they have not changed. I do not believe in democracy… In ancient Athens or Novgorod, when one hundred people gathered and they all knew each other and chose their leaders – it was a democracy. Democracy in its modern form – this is show business. When hundreds of millions vote for someone they have seen only on television… it’s not a matter of choice. It’s a question of how you sell a particular product on TV. For this reason, I just do not believe in this formula for the state system …

“The monarchy is now thriving in such influential countries like England, Saudi Arabia, Japan. The time will come when we will talk about the monarchy as the current system of government, and not about it as a history topic… The whole logic of Russian history comes from the fact that people believe that it is led by God’s elect, and not by the people… We need a church-going people. We need people who understand that the monarch is anointed by God. So long as 5% of the population will go to church on Sundays, there will be no monarchy. When 50% of Russians attend the church, the monarchy will be a necessity.”

Regarding Putin, Malofeev says Russia is “very lucky” to have him. “Only thanks to him is Russia respected in the world…The longer he will rule Russia, the better for the country.”

At his office in Moscow Malofeev was asked to say why the US has omitted him from its sanctions list. At print time there was no reply.