Lambert here: So, it looks like Richistan had the right idea.

Concerns about income inequality are ethical and political as well as economic. Ethically, rising inequality – particularly that in favour capital owners who do not labour for their income – is troubling. Politically, conflation of the rich and the powerful undermines democracy and the ‘background institutions’ that Rawls considered essential for a well-ordered liberal society.1 But for economists, it is the economic problems associated with inequality that are of first-order importance. Among those, none is more important than the effect of inequality on growth.

The link between inequality and growth (in that order) is one of the oldest issues in economics. In classical economics, high income inequality was justified by the need to have the rich who save a significant portion of their income, creating investment. In other words, as Max Weber (The Protestant Ethic and the Spirit of Capitalism) and Keynes (The Economic Consequences of the Peace) observed a century ago, the rich are supposed to be simply ‘receptacles for wealth’ or ‘saving machines’, receiving income but not enjoying it (through consumption). In the 1990s a large literature returned to the topic. Most of the work was cross-country, looking at how more and less equal countries’ growth rates varied (Forbes 2000, Li and Zou 1998, Barro 2000, Banerjee and Duflo 2003). The research essentially tried to find the connection between the second moment of the distribution of income (variance or another synthetic measure of inequality like the Gini coefficient) and the subsequent growth rate of the first moment of the distribution (growth of GDP per capita). The literature ended up producing few convincing results – the influence of inequality on future growth was found to range from positive (mostly for rich countries and over a short time horizon), to neutral, to negative (generally, over the longer-term).

Remarkably, all of the above mentioned studies focus exclusively on growth of average income or GDP per capita. This seems rather paradoxical. Measures of inequality summarize at any given point in time how incomes are distributed across the population. Yet when we investigate inequality’s relationship to future income growth we appear only interested in how it might affect growth of the average. One would think that we would specifically be interested in how individuals at different steps of the socio-economic ladder would fare in societies with different levels of inequality. The logical next step would be to unpack growth.

In van der Weide and Molanovic (2014) we use large US micro-censuses that sample 1% (and more recently 5%) of households in each state, conducted every ten years since 1960, to answer the following question: how does state-level inequality among the poor and the rich in a given year affect state-wide growth rates of disposable income of the poor, middle class and the rich over the next ten years?

The half-century (1960-2010) which the data cover has been a period of substantial transformation of America’s economy and society.

Above all stood a very important two-fold economic development:

This change can be observed in Figure 1 – growth rates in the period 1960-1970 were higher than those in the period 1990-2000 for all percentiles of income distribution except the richest 1%.2 Note that this change plausibly represents an understatement; the very rich – the real top 1% – are not well captured by the data.

Figure 1. US: The average population-weighted state-level growth rates of real income at different points of the income distribution (decennial averages) 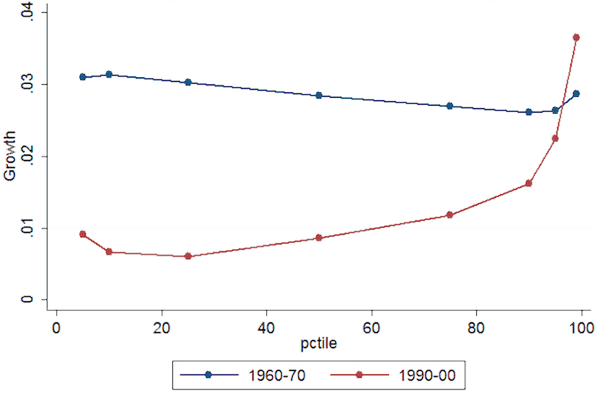 Consider the following back-of-the-envelope analysis. The average state-level Gini coefficient in the US over the entire 50-year period is 0.43, with a standard deviation of 0.04. Now if a state’s level of inequality were reduced by four Gini points (about one standard deviation of the average) keeping everything else equal, the rate of growth of the very poor (people at the fifth or tenth percentile of income distribution) would increase by 0.9% per capita per annum (pc pa) on average. Since the incomes of the very poor on average grew by 0.8% pc pa, such a reduction in inequality wouldmore than double their growth rate on average. At the other end of the spectrum, the same decrease in inequality would reduce the growth rate of the rich (the top 5%) by 0.3% per capita annually. The rich’s average growth rate over the past half-century was 2% pc pa, so their growth would be cut by about one seventh.

We find that overall inequality has almost no effect on the growth rate of the middle deciles – a finding which resonates with Palma’s (2011) argument that in both equal and unequal countries, the shares of the middle deciles (in Palma’s case, deciles five through nine) are almost the same. Figure 2 shows these results by displaying the effects of a one-Gini-point decrease in the growth rate along different points of the income distribution.

Figure 2. Change in the growth rate at different percentiles of income distribution due to a one-Gini-point decrease 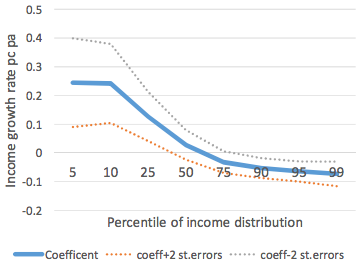 How can these results be explained and what are their political implications? We are here reduced to hypotheses about the channels of influence since we cannot test them directly. One candidate mechanism that would be consistent with our findings is what we refer to as ‘social separatism’. It assumes that the rich, when inequality is high and their incomes are significantly greater than the incomes of the middle classes, prefer not to invest in public goods like education, health and infrastructure, but to consume them privately. This is the type of behavior observed among the rich in developing countries, most notably in Brazil (Ferreira 1995). However, the public goods that the rich are not interested to invest in are crucial for real income growth of the poor.

What are the political implications? If the current economic processes generating high inequality also help increase the future income growth of the rich, the question may be asked: why would the rich accept a policy that would slow their future income growth and thereby reduce their share of the pie? Is there a ‘public interest’ or a democratic (majoritarian) pressure that might convince the rich to accept such a policy change? Or are we just back to the observation made by Plato 24 centuries ago that communities with large inequalities “are not so much a single state as a collection of states”?4

Van der Weide, R and B Milanovic, “Inequality is bad for income growth of the poor (but not for that of the rich)”, World Bank Policy Research Working Paper, No. 6963.

1 “Background institutions must work to keep property and wealth evenly enough shared over time to preserve the  fair value of the political liberties and fair equality of opportunities over generations”, Justice as Fairness: A  Restatement, 2001.

2 We do not show here the results for the most recent 2000-2010 period where growth across the entire  distribution was practically zero as a result of the recent global crisis.

3 These results are essentially the same in the three econometric specifications that we use: pooled time series  and cross-section regressions with regional fixed effects (four standard US regions: Northeast, South, West and  Midwest), system GMM estimation (useful for dynamic panels like ours), and pooled regression with state-fixed  effects. In all cases we use several demographic, educational, and labour force participation state-level controls.