Yves here. This article may seem to be a bit wide of the usual Naked Capitalism terrain, but as the world has shifted from subsistence farming to significantly agri-business controlled food production and distribution, it is not unreasonable to see health outcomes like widespread obesity as a direct result of how the food industry has evolved. Let us not put too fine a point on it: the risk of getting Type II diabetes is highly correlated with body mass, and the high and rising incidence of Type II diabetes is a public health crisis in the making.

And as someone over 50, I can attest that chunky people, and in particular, chunky Americans, really were not the norm once upon a time. I recall when I was assigned to a project in London in 1984. When I went to the gym, the age distribution in the classes I took (and these were tough classes, at least as hard as the ones as I took in NYC, so the target was a serious fitness crowd) was similar to that of the classes I took in New York, but the participants were visibly heavier on average. The next time I spent a decent clip of time in London, in 1997, when I went back to the same gym, the clientele was a bit thinner than their New York City counterparts. And remember, the UK scored then as now close to a par with the US on obesity indices.

There of course is also the secondary but not at all trivial related effect of industrialization and specialization of labor, that the physical activity of hunter-gather and minimally mechanized farming lifestyles are vastly healthier than sedentary advanced economy lifestyles. One of my big reasons for never wanting to own a car is that running my life on foot keeps me out of the sedentary category, which is the most important step to make exercise-wise, in terms of health (more exercise up to the point of not messing up your joints is better, but the most important thing you can do for yourself is get out of the sedentary category). And that also has an impact on body weight.

The article basically says that you can only rely so much on individual initiative as far as getting most people to lose weight is concerned. You actually need broader cultural changes. The one that comes out top of the study list is portion sizes. It isn’t widely enough discussed that the move to bigger portions in the US started in the restaurant trade as a way to justify higher prices. A oft-mentioned contrast is France, where not only are portion sizes much smaller than American norms, but it is not considered impolite not to finish all of your food, and women, who can’t consume as many calories as men, are also typically trained at home not to finish desserts (when they have them, desserts aren’t a staple as they are in many American households).

Many readers will note that the article omits other issues: that some heavy people are healthy, and that some populations like Hispanics and Chinese, are susceptible to diabetes at much lower body mass indices than Caucasians. Another striking oversight is the fact that highly processed foods, particularly high fructose corn syrup, refined sugar, and white flour, are big culprits in glucose intolerance and may contribute to overeating (as in the hunger satiation they give lasts less time than comes from foods with more fat and protein). Finally, it does not mention the other ways that my favorite culprit, overly large portion sizes, contribute to eating disorders. Bulimia is widespread among populations that have to stay thin, like ballet dancers and models. Not only is it not uncommon among young women, but it is apparently increasing among increasingly body-conscious young men. And among lower-income groups, the pressure of juggling multiple jobs and managing tight budgets and erratic schedules means eating calorie-dense, inexpensive, convenient and often obesity promoting foods is not just economically rational but pretty much the only manageable option, no matter what the long-term cost.

Obesity has a similar impact on global GDP as smoking, and around 60% of obese people are in developing countries. This column discusses the seriousness of the problem, and argues that more policy action is warranted – particularly in the form of low-risk, low-cost behavioural interventions.

Obesity is now a critical global issue. More than 2.1 billion people – nearly 30% of the global population – are overweight or obese today (Ng et al. 2014). That’s nearly two and a half times the number of adults and children who are undernourished. Obesity is responsible for about 5% of deaths worldwide. Simon Stevens, chief executive of the National Health Service England, warned in September that “we are sleepwalking into the worst public health emergency for at least three decades.”1

This crisis is not just a pressing social and health issue, but an economic one, too. The global economic impact from obesity is roughly $2.0 trillion, or 2.8% of global GDP – roughly equivalent to the global impact from smoking or armed violence, war, and terrorism, according to new research by the McKinsey Global Institute (MGI 2014) (see Figure 1).

Figure 1. Obesity is one of the top three social burdens generated by human beings 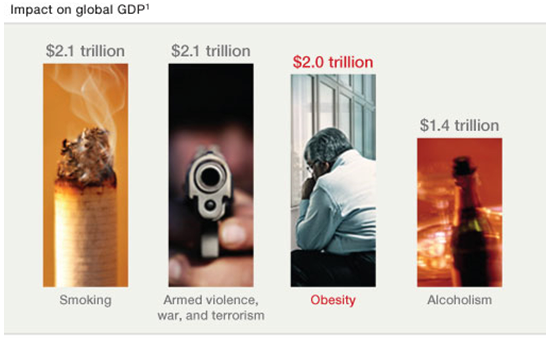 Today, the toll of obesity on health systems alone is between 2% and 7% of all healthcare spending in developed economies. That does not include the large cost of treating associated diseases such a type 2 diabetes and heart disease, which takes the healthcare cost up to 20% by some estimates.

Obesity is a Global Problem

And the problem is escalating rapidly. Worldwide, if the prevalence of obesity continues on its current upward trajectory, almost half of the world’s adult population will be overweight or obese by 2030.

No country managed to reduce its obesity prevalence between 2000 and 2013. During this period, prevalence grew by 0.5 percentage points or more a year in 130 of the 196 countries for which the OECD documents obesity prevalence data (OECD 2014). This was once a problem of relatively prosperous developed economies but, as incomes rise in the emerging world, the problem is spreading. Today, around 60% of the world’s obese people are in developing countries.

There is growing evidence that, on top of the costs to healthcare systems, the productivity of employees is being undermined by obesity, compromising the competitiveness of companies. MGI assessed the productivity lost to obesity using the standard measurement of disability-adjusted life years, or DALYs, which measure the number of years that are lost or rendered economically unproductive due to disease. The number of DALYs lost to obesity today is three times as high in developed economies as it is in emerging markets. However, that gap is narrowing. The rise in the number of DALYs per 100,000 people lost because of obesity slowed in developed economies between 1990 and 2010 but soared by 90% in emerging economies.

So what needs to be done? By reviewing around 500 obesity-reduction research trials around the world, MGI has identified 74 interventions to address obesity in 18 areas. These include subsidised school meals for all, calorie and nutrition labelling, restrictions on advertising of high-calorie food and drinks, and public health campaigns. There were sufficient data on 44 of these to be able to measure potential impact if scaled up to a national level. The systemic nature of the obesity challenge and the highly variable quality of the data that are available mean that this analysis is directional rather than perfect. Indeed, we see our analysis as analogous to a 16th century map that has islands missing and misshapen continents, rather than a perfect 21st century map of the full range of solutions.

If the UK, the country where MGI chose to pilot its initial assessment, were to deploy all 44 interventions that we were able to analyse, it could reverse rising obesity and bring roughly 20% of overweight and obese individuals back into the normal weight category within five to ten years. This would reduce the number of obese and overweight people by roughly the population of Austria.

Cost-Effectiveness and the Need for Coordinated Action

A comprehensive set of interventions needs to employ the full set of mechanisms for changing physical activity and nutritional behaviour. Education about the risks of obesity is important; so is taking personal responsibility for one’s health, fitness, and weight. But all the evidence shows that these are not sufficient on their own to offset the body’s desire to eat that has been honed over millennia of evolution. People need help and that means a change in the environment in which they are making choices – change such as reduced standard portion sizes, changing marketing practices, and restructuring cities and educational establishments to make it easier for people to exercise.

Our analysis for the UK suggests that almost all the interventions identified are cost-effective for society – savings on healthcare costs and higher productivity could outweigh the direct investment required to deliver the intervention when assessed over the full lifetime of the target population. An integrated program to reverse rising obesity could save the National Health Service about $1.2 billion a year. It is important to note that not all of the interventions are cost-effective for the specific stakeholder delivering them. Sometimes the return on investment lands elsewhere in the economy, the benefits going to households or to healthcare systems, for instance. This misalignment of economic incentives is one of the major challenges inhibiting concerted coordinated action on obesity.

Figure 2. Cost-effective interventions to reduce obesity in the United Kingdom include controlling portion sizes and reducing the availability of high-calorie foods. 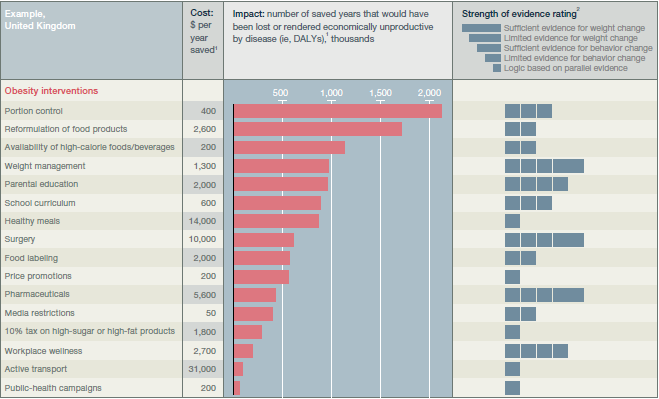 2Based on the evidence rating system of the Oxford Centre for Evidence-Based Medicine.

Only a systemic, sustained portfolio of anti-obesity initiatives, implemented on a large scale will be sufficient to overcome rising obesity. No single group in society – government, retailers, consumer goods companies, restaurants, employers, media organisations, educators, healthcare providers, or individuals – can offset rising obesity on their own. Yet efforts to address obesity have been piecemeal thus far. To date, there have been pockets of excellent interventions delivered around the world, but there’s been insufficient attempt to take an integrated view on what it will really take to reduce the public health burden across the board. Moreover, the global debate on how to respond has become polarised, and in some cases deeply antagonistic – partly because the response required is so complex, and spread across such a range of actors in society. This is proving a barrier to progress.

More Research is Needed, but Action Should Start Now

The MGI analysis is far from offering a complete picture as research into obesity has many gaps and data is of variable quality. There clearly needs to be more investment in obesity research. Globally, such investment is estimated at about $4 billion a year – but this is only 0.2% of the social cost of obesity.

Given the increasing severity of the obesity crisis, we cannot afford to wait for perfect evidence on which interventions work and which don’t – especially given many of them are behavioural interventions for which it is difficult to conduct randomised controlled trials, and which are, in any case, low-risk. On many of the interventions, there is enough evidence to know that they work for at least some segments of the population and are low-risk and low-cost. We should therefore learn as we go and make a start. The knowledge we already have justifies much more action against obesity than is currently typically taking place.