Yves here. Economists seldom take note of the fact that the degradation of skills at major banks has had serious macroeconomic effects. One issue has been described by Andrew Haldane: that as banks have become deregulated, they all have come to use very similar methods for making loans and taking other risks. This is particularly true in retail and small business lending, where individual and often character-based decisions made by loan officers have now been superceded by FICO-based models. The heavy reliance on FICO means that too many banks make similar lending decisions, exacerbating the tendency of banks to run lemming-like off cliffs all together. Haldane used a biological metaphor: that previously specialized types of financial firms and more autonomy in branch lending decisions led to more diversity in an ecological sense, which produced a more stable system. Less biological diversity, and less diversity among firms, increases systemic risk.

A second issue is that the abandonment of training of credit officers means that banks have effectively abandoned the small business lending market. Mind you, that does not mean that small businesses can’t get credit, but the sources consist of small credit lines associated with business accounts, credit cards, and secured lending (equipment lending, borrowing against real estate owned by the enterprise). The dearth of bona-fide small business lending is one of the big reasons why the Fed’s super low interest rates didn’t lead to much in the way of increased lending to smaller companies (note that the biggest reason was still lack of loan demand. Businesses don’t borrow unless they see a good use of funds).

The comment above discusses the lack of small business demand for loans. Although that is the primary driver, there is a second one I’ve been remiss in not mentioning: banks are pretty much not in that business any more, and why the Fed ignores that and pretends to act as if putting money on sale will lead to more small business lending is beyond me.

The barrier to small business lending isn’t the economics; it’s that most banks no longer have that skill. I’m not making that up. In the stone ages of my youth, all the big banks (and the industry was less concentrated, so there were more “big banks” back then) had two year credit officer training programs. Those credit officers would do the analysis and make recommendations on big corporate loans. Some would eventually become branch managers, and way back then, branch managers would have the authority to approve loans up to a certain level. They used not only their formal analytical skills, but also local information about the health of the economy, the reputation and stability of important local businesses. If the local hardware store owner came in looking for a loan to expand, the branch manager would have an informed view on whether his estimates of how much and how fast his top line would increase after his build-out. He’d even probably know if his cost assumptions were realistic based on prior experience.

That capability has been abandoned in large banks. Branches are just retail stores; lending is productized and based on whether the borrower meets certain criteria set at much higher levels in the bank. You might still find the old-fashioned case-by-case type of small business lending in small banks, but it’s as dead as a dinosaur in the big ones, and the big ones dominate the industry.

This VoxEU article looks at whether loan officers are worth what they cost. It finds that they do in China and provides a framework for looking at that issue in other markets.

Many lenders hire loan officers to screen soft information that may otherwise be ignored by credit scoring. However, in addition to their compensation costs, loan officers may have characteristics, such as being overly cautious, that could distort their decisions. This column documents the performance of loan officers using data from a Chinese lender. Despite the distortions, the loan officers contribute three times their pay in annual profits above what the lender could have earned by itself, even with the benefit of hindsight.

With the success of peer-to-peer lenders like Lending Club and Prosper, many lenders have experimented with alternative mechanisms beyond credit scoring.1 One such alternative is the increased reliance on soft information, which is subjective data that is difficult to interpret without loan officers. Loan officers, however, are not just costly in terms of compensation. Their characteristics – such as being cautious or having low ability – could distort their loan decisions to the detriment of the lender.

I consider the value of these loan officers using loan and repayment data from 2010–2013 for approximately 32,000 borrowers from a Chinese lender. This large lender specialises in unsecured, cash loans to households and small businesses. Loan officers view the borrower’s entire file including financial statements, references, notes, credit scores, and even photographs before choosing an approved loan amount.2

My job market paper calculates the value of hiring these loan officers by comparing them to an alternative where the lender only uses hard information such as income and credit scores (Wang 2014). It is important to note that this is not measuring the value of credit scoring. Risk-based pricing has been extensively used since at least the early 1990s (Johnson 1992) and their effectiveness is not in doubt. Einav et al. (2013) and Edelberg (2006) both provide compelling evidence of the strength of credit scoring versus exclusively subjective underwriting. My paper compares loan officers operating in conjunction with credit scoring versus credit scoring alone.

Despite the fact that loan applications are randomly assigned,3 there are differences across loan officers. Figure 1 shows the average approved loan amount plotted against credit quality. Notice that loan officer A approves a higher loan amount than loan officer B at every level. There are also differences in the variance of loan sizes as well as loan performance. To explain this, I lay out an empirical framework in the paper that can explain their behaviour, accounting for differences in risk attitudes, ability, and even overconfidence. 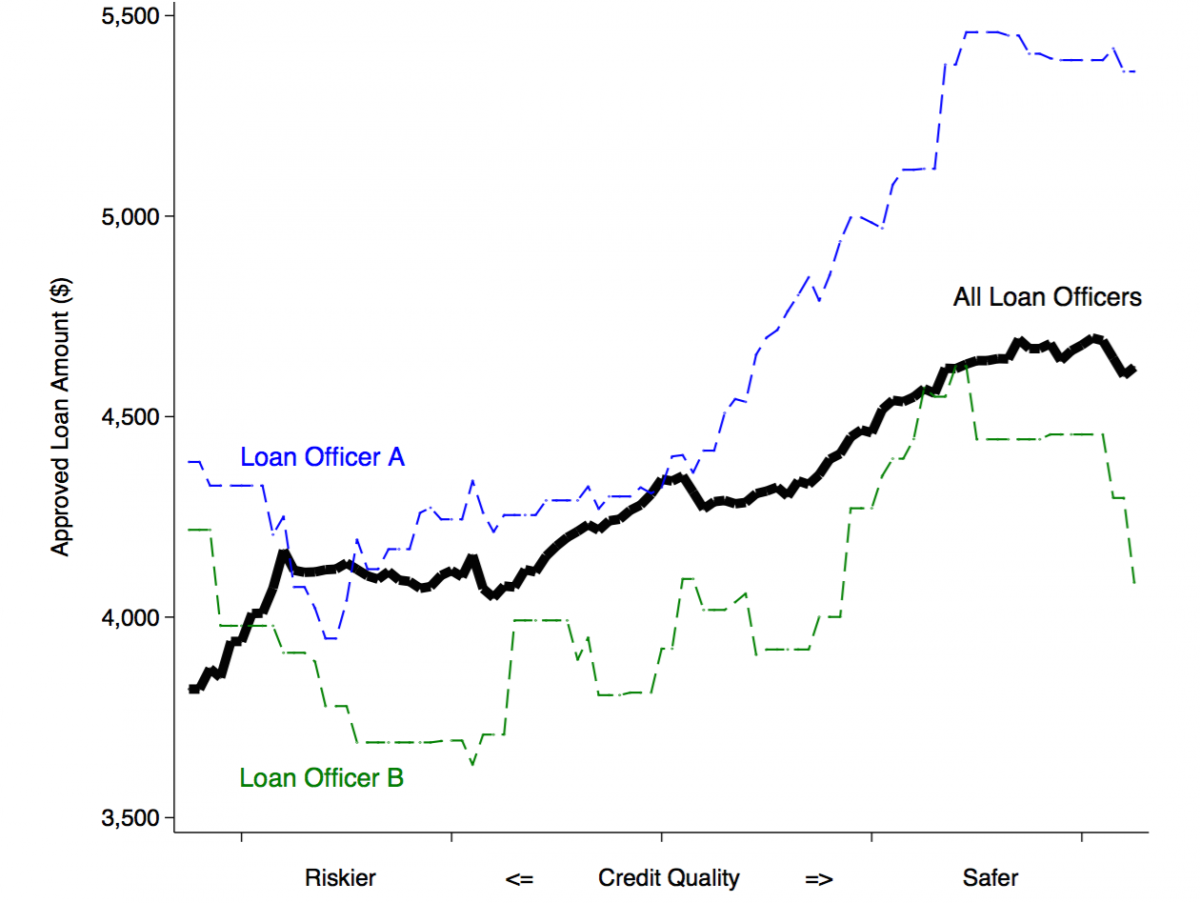 Notes: The graph displays the average approved loan amounts for 282 loans made by loan officers in June 2012 for a 48% APR, 24 month loan. Borrowers apply for a loan amount with a pre-set APR and payment length, and loan officers decide on an approved loan amount. Over 90% of borrowers are given loans much smaller than the amount applied. Credit quality is the lender’s internal proprietary measure of borrower risk. Higher values indicate safer borrowers. 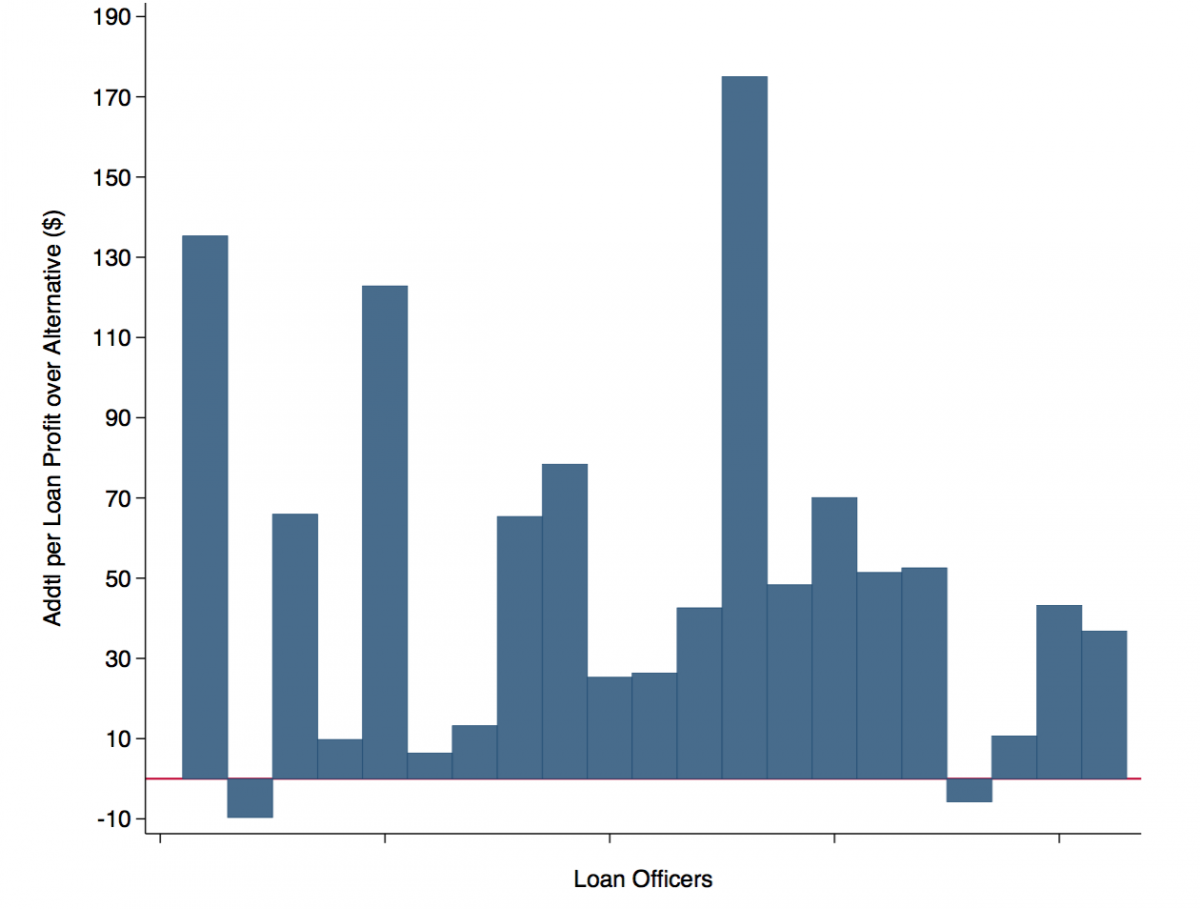 Notes: The graph displays the difference between the loan officers’ loan profits compared to an algorithm that only takes into account hard information for approximately 32,000 borrowers. The algorithm is calibrated using over 700 data points about each borrower and the actual repayment data. The average loan officer is paid roughly $11 per loan, and the average additional profit is just over $35.

One may wonder how much of this result comes from the effectiveness of the algorithm. Could a more predictive algorithm outperform these loan officers? The answer is likely to be no, because the algorithm is calibrated using the borrower’s actual repayment data.[5] This idealised algorithm is analogous to picking an investment portfolio in 2013 after observing data from 2014, which means that alternative algorithms developed at the time of a loan’s origination are likely to be worse. In addition, the algorithm takes into account more than 700 data points about each borrower including many that may be excluded in some settings such as gender, age, and ethnicity.

I have argued here that these loan officers are valuable. This is despite their biases and an automated lending model with access to extensive amounts of hard information and repayment data. More broadly, my job market paper provides an empirical framework for evaluating the contributions of subjective expertise that can be applied in other contexts such as asset managers or even admissions counsellors. While experts have been beaten in many fields such as chess and mutual fund management (Gruber 1996), this is one area where man can still beat the machines.