A few days ago the influential IFO Institute published a short paper suggesting that a Greek default inside the euro-area would cost Germany €77.1 billion, while a default combined with an exit from the euro would cost €75.8 billion. The two numbers are about the same, yet unsurprisingly, media reports emphasised that a Grexit would be cheaper for Germany by €1.3 billion (see e.g. a Focus report here).

We think that the publication of such numbers falsely suggests that direct losses can be calculated precisely. Even more importantly, we noticed that the calculation did not consider three major factors:

All three factors suggest that direct losses for Germany would be much larger if Greece was to exit the euro.

Before assessing the details of the calculations, let us make our view clear: we think that a Greek default and exit are neither likely nor necessary. It is definitely in the interests of both Greece and its euro-area partners to find a comprehensive agreement that would avoid default and exit, which would make everyone much worse-off. Greece would enter another deep recession, which would push unemployment up further and reduce budget revenues, necessitating another round of harsh fiscal consolidation. Euro-area creditors would lose a lot on their Greek claims and private claims on Greece would also suffer. The new depreciating Greek drachma may not revive the Greek economy that much (see on this Guntram Wolff’s recent post here and our 2011 post here). Furthermore, a Grexit would have many broader implications beyond economic issues. What are the prospects for a comprehensive agreement?

While there are very strong incentives to cooperate and therefore a Grexit is not very likely, for the sake of intellectual exchange, we thought it useful to comment on the IFO calculations assessing the impact of default.

The IFO Institute’s calculations considered the German share of the official assistance to Greece (bilateral German loans, Germany’s share in the EFSF and IMF loans) and various European Central Bank claims. They summed-up all of these claims, assuming that all will be written off in the case of a default. While we have some questions considering central bank related claims (which explains the €1.3 billion difference in IFO’s results), there are three more important issues.

The first major problem with these calculations is that they consider the complete write-off of official claims on Greece in both cases. We doubt that this will be the case: there have been many debt restructurings in recent decades, but claims have never been written off completely. See for example, Juan Cruces and Christoph Trebesch’s dataset –, which summarises 187 distressed sovereign debt restructurings from 1970-2013. The average haircut was 38 percent. Moreover, among the two scenarios (default inside versus exit), the haircut would most likely be much higher if Greece was to exit the euro area, since the new Greek drachma would likely depreciate substantially and Greek GDP would contract substantially, thereby reducing Greece’s ability to honour debts, especially those that are denominated in foreign currencies (in this case, the euro would be a foreign currency). The depreciation of the exchange rate of the Argentine peso in 2002 may be indicative of a hypothetical nominal currency depreciation of the new Greek drachma in the case of a Grexit (Figure 1).

Figure 1: The exchange rate of the Argentine peso against the US dollar, January 1992 – January 2015 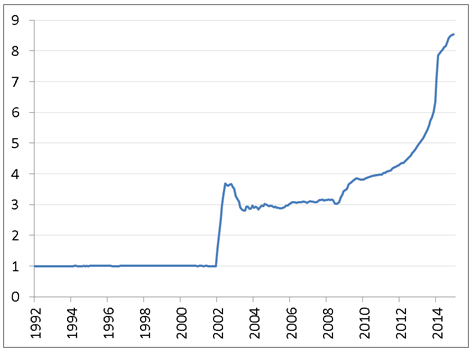 Second, the the IFO Institute’s calculations do not consider claims by the private sector (though the IFO paper acknowledges this omission). Again, a Grexit would likely lead to much larger losses for the German private sector than a Greek default inside the euro area, since more Greek banks and non-banks would default on the back of a likely massive depreciation of the new currency and contraction of Greek GDP. The table below shows that while German private sector claims on Greece have been reduced substantially since 2009, they still amount to about €16 billion of debt-type claims (the sum of portfolio debt and banking exposure) and about €3 billion of equity-type claims (the sum of FDI ad portfolio equity).

Third, further second round effects should be expected, such as a reduction of German exports to Greece. Moreover, other euro area countries would suffer losses too, which could negatively impact Germany as well.

Overall, we conclude that while calculating the losses in the event of a Greek default is difficult and depends on many assumptions, in all likelihood, the financial losses of Germany and other euro-area countries would be much higher if Greece exits the euro than if Greece remains.