Yves here. I’m using this post as an object lesson in what is right and wrong with a lot of economics research to help readers look at research reports and academic studies more critically. That often happens with post VoxEU articles; they have some, or even a lot, of interesting data and analysis, but there’s often some nails-on-the-chalkboard remarks or a bias in how the authors have approached the topic. Readers, needless to say, generally pounce on these shortcomings.

Here, the authors take up a legitimate topic: are surveys on wellbeing asking the right questions? Personally, I find “wellbeing” to be such a nebulous concept that asking members of the public for how they rate their current standing to be a fraught exercise.

The topic is becoming more important as some economists are trying to come up with better measures of prosperity than GDP. For instance, Joseph Stiglitz, Amartya Sen and Jean-Paul Fitoussi have been working with the French government to devise improved metrics for economic performance and social progress.

On the one hand, recognizing that current polls come up short and trying to devise new methods is a laudable goal. On the other, some aspects of how they went about the project are sadly typical. The ones that stood out for me was that they did what amounted to a literature search to come up with a long list of attributes. So far, that seems sensible.

Then from that they went and generated a survey. There are actually two problems with that. The first is that there is a good body of knowledge as to how to design and conduct surveys so at to get valid, repeatable results. My knowledge is about 20 years stale, but I suspect the principles are still generally valid. You do qualitative research first (as in in depth interviews with people who are representative) to generate themes and find out how they use language. This was a step that was likely important here, since the themes and ideas they got were from academics, economists, and philosophers, and their use of language could have varied in subtle but important ways from that of the target population (survey results are VERY sensitive to how questions are phrased). The next step is to “validate” the survey instrument by taking variant of the questions and also stacking the questions in different sequences to see how to eliminate any biases (of course, if you are Rasmussen, you would try to introduce them).

Note that surveys are rarely done well because it is time-consuming and costly to debug them properly. But in this case, I suspect it’s also the result of economists famed lack of interest in learning from other disciplines.

But even allowing for the fact that these researchers didn’t have the budget to undertake this project in a rigorous manner, there’s a glaring error in how they constructed it. The questions are not mutually exclusive. They asked respondents to rate the importance of various aspects of wellbeing. One response was “The overall wellbeing of you and your family.” They also had “Your health” and “The happiness of your family” and “Your mental health and emotional stability.”

The “overall” question is a superset, and the next three I cited are subsets of it. It’s no surprise that the superset scored higher; that’s precisely what you’d expect.

GDP has long been used as a measure of a population’s wellbeing, but there is a growing interest among policymakers and researchers to go “Beyond GDP” (Fleurbaey 2009) – to find better measures of a person’s actual lived experience than the value of her income or expenditure.

One idea is to directly ask people about their wellbeing. Recently investigated survey measures of ‘subjective wellbeing’ (SWB) have primarily focused on measuring aspects of SWB such as happiness and life satisfaction. The basic problem faced by single-question SWB measures (such as happiness or life-satisfaction questions) is that they do not manage to capture all the wellbeing aspects that enter into preferences (for recent evidence, see Benjamin et al. 2012 and 2014a). Indeed, a consensus is emerging among researchers that wellbeing is multi-dimensional, and more than one survey question is needed to assess it.

Some governments have begun adding SWB questions to national surveys and expressing intentions to use SWB measures to guide policy. For example, the UK Office for National Statistics (ONS) added the following questions to their national Integrated Household Survey:

But it is not clear that these four questions – or for that matter, any small number of questions taken from the academic literature – are sufficient to adequately measure wellbeing.

Going Beyond Happiness and Life Satisfaction

What questions should governments ask instead? How should the responses to these questions be used? In our recent paper “Beyond Happiness and Life Satisfaction: Toward Well-Being Indices Based on Stated Preference” (Benjamin et al. 2014b), we attempt to take on these questions. We propose to go “beyond happiness and life satisfaction” and construct a more comprehensive measure of SWB, an index – with weights based on stated preference – that captures a fuller picture of a person’s wellbeing.

In Benjamin et al. (2014b), we take as a starting point the idea that people have preferences over ‘fundamental aspects’ of wellbeing. The theory is grounded in the economic principle of revealed preference, which holds that a person’s informed choice is the best criterion for judging what increases her welfare. Following that logic, we created a survey that asks a respondent to choose between increases in different wellbeing aspects (so we can learn which option would better improve her welfare). Using her answers, we can estimate the respondent’s relative ‘marginal utilities’ of aspects of wellbeing – meaning how much the respondent values a small increase in each aspect. These relative marginal utilities can then be used as weights to combine the aspects into a wellbeing index for the individual. We find it more attractive to use a person’s stated choice as the sole determinant of the index’s weights, rather than to (paternalistically) rely on the opinions of experts regarding how to weight (i.e. what level of importance to assign) aspects of that person’s wellbeing.

Implementing our approach requires knowing the list of aspects of wellbeing that matter to people – a list that no one really knows. For the time being, we instead construct a long list of all the aspects of life that have been proposed as important components of wellbeing in a sample of major works of psychology, philosophy, and economics (e.g. Maslow 1946, Sen 1985, Ryff 1989, Nussbaum 2000, Alkire 2002, Diener and Seligman 2004, Loewenstein and Ubel 2008, Stiglitz et al. 2009, Graham 2011). To our knowledge, ours is the most comprehensive effort to date to construct such a compilation. Our current list includes 136 aspects. Most are ‘private good’ aspects, or aspects that relate to the individual’s own wellbeing (e.g. ‘your health’), but many are ‘public good’ aspects, or aspects that relate to an entire society’s wellbeing (e.g. ‘equality of opportunity in your nation’).

The drawback of attempting to generate a comprehensive list is that it increases the likelihood of conceptually overlapping aspects (i.e. aspects that describe the same fundamental aspect). We have tested the results we discuss below (i.e. the estimated marginal utilities) to ensure they are not affected by overlap. However, when it comes time to actually construct a wellbeing index by combining these relative marginal utilities, overlap would lead to double counting of some aspects. This is one problem we do not fully resolve in the paper (though we suggest a research strategy for identifying the extent to which the aspects of wellbeing measured by survey questions overlap).

We designed and conducted a stated-preference survey to demonstrate how our framework could be applied in practice, and how wellbeing indices could be constructed using our methodology. A stated-preference survey estimates relative marginal utilities of aspects of wellbeing, to be used as weights, while a SWB survey – like the UK example above – measures levels of these aspects. The survey sample we used was not nationally representative but was demographically diverse and included over 4,600 internet survey respondents. Respondents were asked to choose between two options that differ only on how the aspects in each option changed. For example: 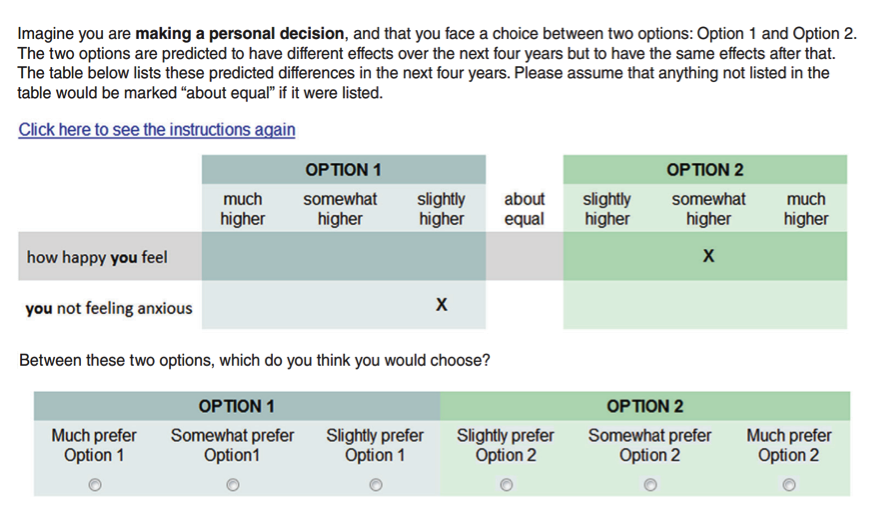 In this example, two aspects are varied: “you not feeling anxious” is “slightly higher” in Option 1, and “how happy you feel” is “somewhat higher” in Option 2. The randomly chosen number of aspects in each scenario was either two, three, four, or six aspects, which were divided between Option 1 and 2.

Because each scenario’s aspects and their ratings (i.e. “slightly higher”, “somewhat higher”, or “much higher”) were randomly assigned, we can estimate the relative marginal utilities of the aspects by running a regression in which the respondent’s choice (Option 1 or 2) is the dependent variable and the aspect ratings are independent variables. Aspects were ranked by the size of their coefficient, which is an estimate of their relative marginal utility. Below we reproduce part of Table 2 from Benjamin et al. (2014b), showing the top ten ranked aspects. 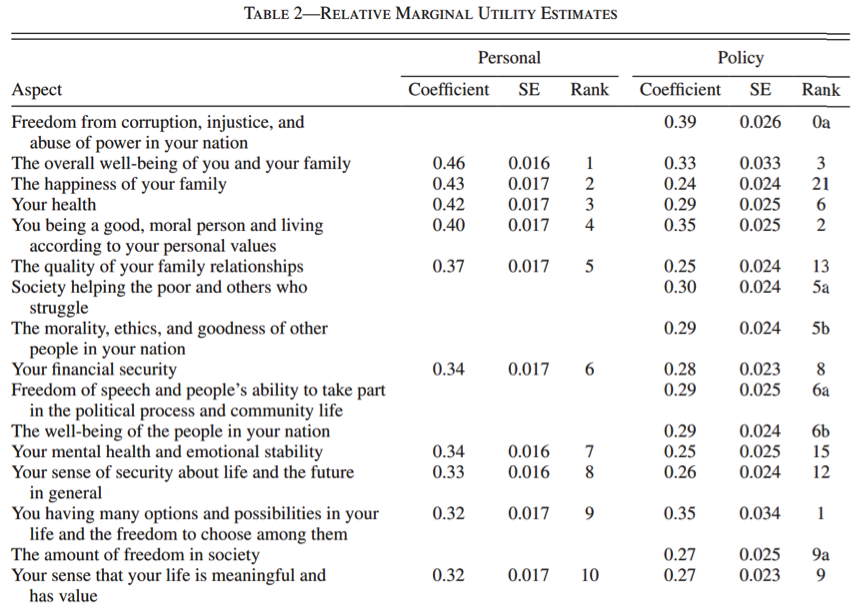 Among the aspects used in the personal scenarios, we found that aspects commonly asked about in SWB questions, such as happiness and life satisfaction, were important to wellbeing (i.e. had high coefficients). However, several aspects not commonly asked about were also important, including those involving family (wellbeing, happiness, and relationship quality), health (general and mental), security (financial, about life and future, and physical), values (morality and meaning), and options (freedom of choice and resources). In fact, in the “Personal” panel in Figure 2, none of the top ten aspects are commonly used as SWB measures.

In policy scenarios, we found that aspects that were high-ranking in personal scenarios retained their high rank. In addition, private good aspects related to freedom (freedom to choose, ability to pursue your dreams, being treated with dignity) and avoiding abuse (avoiding deception, avoiding pain, avoiding emotional abuse) ranked higher as policy than as personal aspects. Public good aspects had among the largest coefficients, including freedom from corruption, injustice, and abuse of power, society helping those who struggle, the morality of other people, freedom of speech and of political participation, and the wellbeing of the people in your nation. Respondents seemed to emphasise expanding their choice set in policy decisions.

The kind of survey we ran could be used to estimate relative marginal utilities of a comprehensive list of wellbeing aspects at regular intervals across a large sample. As noted above, we found several aspects to be important in our study that are not commonly included in SWB surveys, such as those related to family, values, and security. The inclusion of these factors in future research is therefore important. However, due to constrained resources, our survey only accomplishes a first-pass demonstration of feasibility. Ideally, a government would design a survey that contains both SWB and stated-preference components – that is, a survey that first asks respondents to choose levels for different aspects and then to choose between different profiles of aspects in order to estimate marginal utilities.

We have taken a step “beyond happiness and life satisfaction” towards a better measure of SWB, but it is only a first step. Work on measuring SWB is still in its infancy and much more needs to be done before reliable measures of national wellbeing can be generated. Accurate national measures of any indicator cannot be developed quickly – after all, it took decades to refine GDP into the national statistic it is today. We hope that our framework will help accelerate research to find better measures of wellbeing, so that policy may be guided not just by what strengthens a person’s economic and financial portfolio, but by what improves the sum total of all the things that matter in life, in accordance with each individual’s own views.
References