Oh what a tangled web we weave

When first we practise to deceive

Well, my last post on Odgers and Pacific Fiduciaries and stock fraud didn’t attract any more irate comments from the lady herself. At least, not at Naked Capitalism; discretion is the better part of valour, I suppose.

Instead, Odgers judged it more prudent to rubbish my piece from afar, in the comments to a post, aptly entitled Odgers in S**t, at the New Zealand political blog, The Standard.

In particular, she had this to say:

It doesn’t sound as if that very necessary conversation has happened yet, then. Rather extraordinary, given that Pacific Fiduciaries, as I remarked in my previous post, is now visibly shackled, for good, both to a stock, HCI Hamilton, delisted from GXG Markets in order to protect investors and maintain an orderly market, and to an adviser, Touchstone, expelled for bringing the market into disrepute (here, “contacts” tab).

But hey, Cathy doesn’t care all that much about that: she’s out of Pacific Fiduciaries anyway, apart, possibly, from a shareholding registered to a company in that offshore opacity paradise, Anguilla, beloved of crooks with an American connection, and apart from certain contingent liabilities, that we will look at in a moment:

I resigned as a director 16 September 2014. Another matter Richard failed to research properly.

Tut, tut, tut. The date of my post was 14th October and at that time Cathy was indeed officially recorded as a director of Pacific Fiduciaries. But she is, for once, quite right: her resignation date is officially recorded as 16 September 2014, too. So what’s happened? Surely Odgers can’t be telling the whole truth about something?

A quick look at the audit trail for Pacific Fiduciaries, at the Samoa Company Registry, squares the circle. Her resignation wasn’t filed until 4th November 2014, well after my post was published. 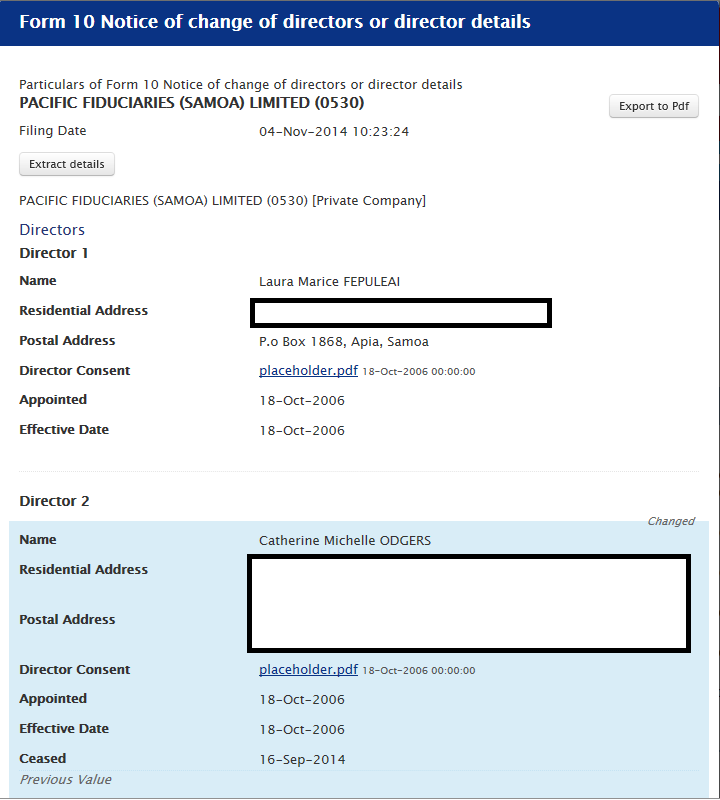 So, in short, Odgers is full of it, and knows it. It’s not my research that’s at fault, it’s Cathy’s candour. The director change was backdated by about 7 weeks, or roughly 35 working days. I can’t be arsed to check exactly: there’s a Samoan public holiday, White Sunday, so OK, maybe it’s only 34 working days’ delay. So at the time I did my post, Odgers was indeed recorded as a director; she knew that when she commented at The Standard, yesterday, too.

Once the deception is obvious, the inept smear tactics are just fun knockabout. But now that Odgers has drawn attention to that resignation date, one espies an interesting complication for Pacific Fiduciaries and its director and ex-director.

In many jurisdictions, submitting such a hugely backdated change is actually an offence. Otherwise, you see, dishonest people would be rewriting history all the time.

So let’s take a little look at the Samoan Companies Amendment Act 2006 shall we? Section 88 looks interesting, if you like that sort of thing: 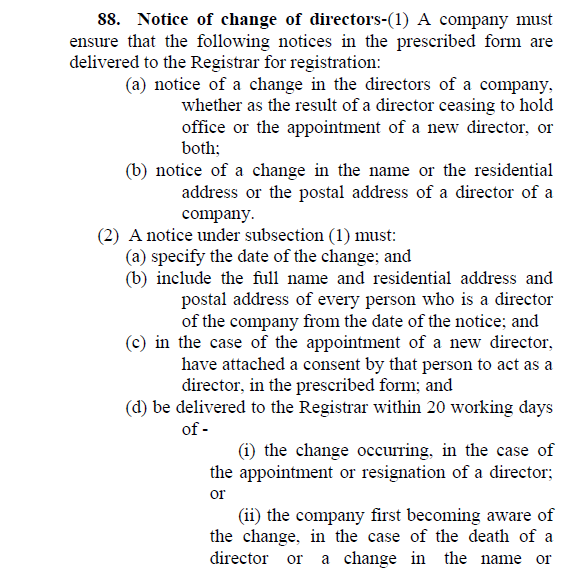 The resignation notice is to be delivered within 20 working days. The roughly 35-working-day delay in Odgers’ submission therefore looks like a handsome breach, to me. The next bit of the Act spells out what that means:

On the face of it, then, the late submission of Odgers’ resignation has the potential to make her, her fellow director Linda M. Fepuleai, and Pacific Fiduciaries itself, each liable to fines not exceeding 50 penalty units (whatever those are right now). Odgers may have left the board of Pacific Fiduciaries, but she’s left a little piece of herself behind.

That’s a truly outstanding mistake for an offshore fiduciary to make, of course. I hope it isn’t going to be an embarrassment to Linda M. Fepuleai, or to Linda’s father, a former High Commissioner to New Zealand. One trusts that it will be brushed under the carpet somehow.

By way of a more honest alternative, perhaps that apparent breach of the Companies Act is something that Odgers, or for that matter, her vast fan base, would like to take up with the Samoa Company Registry. That is, when she’s told GXG Markets how HCI Hamilton found Pacific Fiduciaries, out of all the offshore lawyers in the world, and has finished talking to the Samoan AML regulator about her due diligence on HCI Hamilton.

Or would she rather leave it to me, again, to do what I can with the messes she makes? I am, as Odgers should be well aware by now, prepared to oblige.

Hoisted from comments, commenter Bushlawyertoo, whoever she is, kindly provides evidence that this will all be even easier to brush under the carpet than I supposed. For, dear readers, I was wrong: Pacific Fiduciaries is not governed by ordinary Samoan Company Law, but by Trustee Company law:

I think you have it rather wrong here and need to update your post accordingly.

“(6) It shall be a condition of every registration granted to a trustee company to which subsection (5) applies, that the trustee company shall forthwith notify the Authority in writing through the Registrar of any change of:
(a) it principal office in Samoa; or
(b) either or both of the officers designated pursuant to subsection (5)(b)”

The resignation would have had to have been tendered under the supervision and approval of the Samoan Regulator (the Authority) else it would not have been accepted by the Companies Registrar. It would explain why she is none too concerned with anyone contacting the Regulator because it was done under the approval on such notification, and then supervision as would be standard in any offshore jurisdiction for such a change in director of a licensed company.

The form I refer to is found at http://sifa.ws/images/uploads/TCA04FORM.pdf

So, although ordinary companies now have at most 20 working days to supply director resignations, the as-yet unreformed Samoan Trustee Company Law specifies the studiedly vague period “forthwith”. And, as Bushlawyertoo remarks, it must be that the very accommodating regulator does indeed think that “34 working days” is the same as “forthwith”, or that the volume of supervised director resignations from the 9 Samoan Trustee Companies that exist is such that it can take 34 working days for them to be approved and make it to the Companies Register.

So, when Odgers banged out of Jeeves Group and turned in her lawyer’s ticket, she banged out of Pacific Fiduciaries, too. Firming this up took over 3 months, which is some winkling out, but at last we have got the basic timeline straight, without any input whatsoever from Cathy Odgers, who says

Definitely not going to talk about matters to hacks and bloggers.

My thanks, then, to commenter Bushlawyertoo, for the assistance.

Now, as it happens, you can call me  a bush lawyer, if you will (it is a designation I am happy to accept), but as far as I can see, two interesting points still stand:

…at the time I did my post, Odgers was indeed recorded as a director; she knew that when she commented at The Standard, yesterday, too.

And when Odgers resigned, she left this behind:

Pacific Fiduciaries, as I remarked in my previous post, is now visibly shackled, for good, both to a stock, HCI Hamilton, delisted from GXG Markets in order to protect investors and maintain an orderly market, and to an adviser, Touchstone, expelled for bringing the market into disrepute (here, “contacts” tab).

Thanks to Bushlawyertoo, we can be a little more confident that this unfortunate entanglement, if it is real, occurred on Cathy’s watch. I still think Cathy might have something to talk to the regulator about, there.