Back in mid-October, I wrote a post that, amongst other bits of knockabout, made some serious remarks on the apparent connection between Cathy Odgers, Pacific Fiduciaries (her Samoan fiduciary company), and an exceedingly obvious boiler room fraud, HCI Hamilton, that had a listing on GXG Markets, a small European stock exchange.  I wondered how it was that Odgers, a bumptious ex-blogger, wannabe politician, PR eminence grise, and lately, via email leaks during the recent NZ elections, genuine political mover and shaker, was so often to be found highly adjacent to large and small investment frauds.

The post attracted a succession of menacing but incoherent, then sulky, then sulky again, but always unconvincing and mistaken responses from Ms Odgers herself.

Odgers’ comments included mistakes that one really doesn’t expect a seasoned lawyer to make. For instance, she affirmed, emptily, that regulators are, relative to “keyboard googling”,  all-seeing and all-knowing:

I can assure you that banks and regulators all around the world run far more stringent tests than your keyboard googling on all these people and if they find anything wrong with them they act accordingly.

Well, that’s just clueless. Is that how anti money laundering and and Know Your Client processes work? Does one really just assume the regulators would have found  anything dodgy and take on the client anyway? And hang on a minute, the whole point of my post was that the regulators *had* found something dodgy about the people around HCI Hamilton. So even on her own terms, Odger is making no sense here.

Second, I made an entirely chivalrous offer to leave it to Odgers to tip off the regulators at GXG Markets:

Thanks for the tip about contacting a regulator. But it’s not my company that has its contact details splattered over this scam stock; it’s yours. It’s entirely up to you how you manage that reputation risk, of course.

Bafflingly, Odgers took this very kind offer to mean that, after all, I had no evidence and intended to take no action. She reached these conclusions despite the mountain of research, provided in my post, that suggests that HCI Hamilton is a fraud. Obviously, assessment of evidence, or for that matter, plain old reading comprehension, are not Odgers’ strong points. Those are striking deficiencies, in a qualified lawyer.

That will be embarrassing if it is so.  A  timeline of selected GXG press releases from October 2014 to January 2015 makes it abundantly obvious why. Let’s start on October 30th, just two weeks after my blog post went up.

The market quotation and trading of HCI Hamilton Inc. (HCI1) has been suspended on the GXG First Quote under rule 17.2(b) & (c).

The suspension is pending a further clarification from the company and a review by the GXG Regulatory Team.

17.2. Additionally, GXG may suspend the trading of Securities where:

b. the protection of investors so requires; or

c. GXG considers the Issuing Company has brought the integrity and reputation

of the Market into question.

By 9th December the enquiry has delivered the results one should expect:

GXG Markets has today 09:00CET terminated the market quotation and trading of HCI Hamilton Inc. (HCI1) from the GXG First Quote due to the maintenance of an Orderly Market and in relation thereto non compliance with the following market rules:

Rule 13.1.: No communication with the Market.

So much for HCI Hamilton; next up, their GXG Adviser, Touchstone, on 13th January 2015

Pursuant to non-compliance with the following Market Rules for GXG Advisors and Introducing Partners:

Rule 2.1 – The advisers’ responsibility for assessing the appropriateness of each Issuing Company’s application to the relevant Trading Venue

Rule 3.1 – The advisers’ responsibility for advising and submitting a completed Application Form for Issuing Companies and a completed Director’s Questionnaire for each Director

Rule 7.1 – Bringing the Market into disrepute

The GXG Regulatory Team has decided to:

This entirely predictable series of events now leaves Pacific Fiduciaries dangling upside down from GXG Markets’ Naughty Tree, in the company of 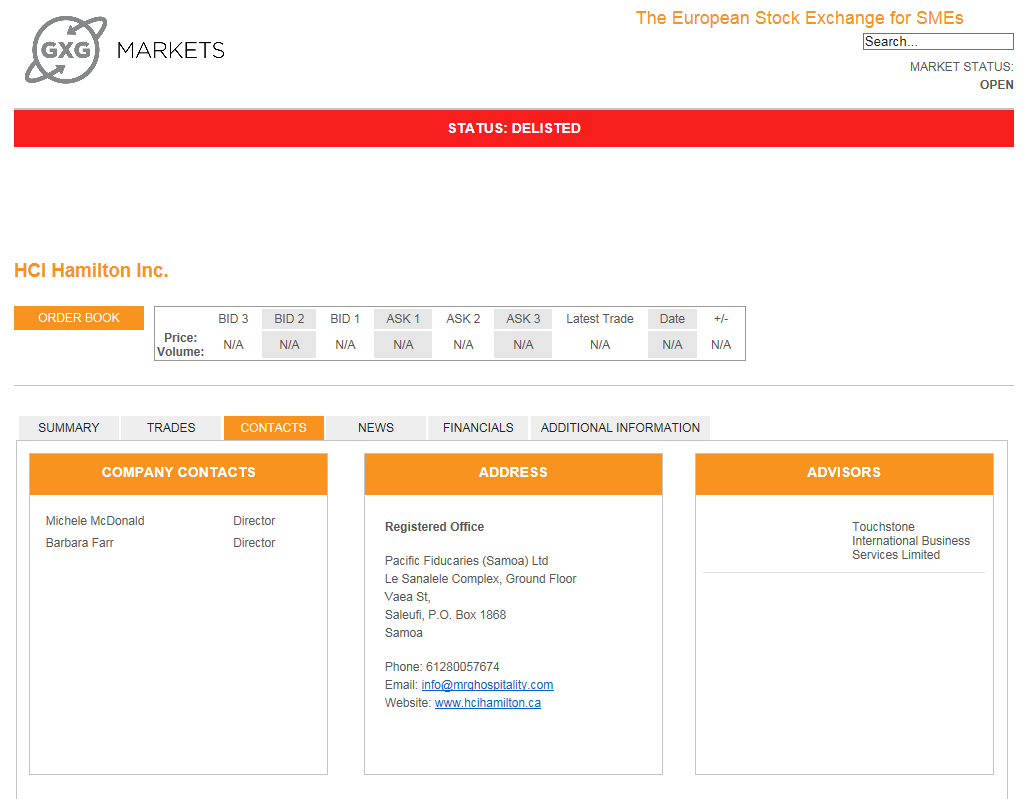 This not-great look for Pacific Fiduciaries could have been avoided if only Ms Odgers had read and understood the evidence, and pre-empted the inevitable news flow Oct 2014 to Jan 2015. But she left it to others to provide the tipoff to GXG, with the results you see above.

One final emphasis: if the very obvious fraud vehicle HCI Hamilton ever really was a client of Pacific Fiduciaries, whether for poste restante services, or more, a question which Ms Odgers still hasn’t addressed, then Pacific Fiduciaries’ Know-Your-Client process really doesn’t look all that clever. Perhaps that is something that should attract the interest of the Samoan anti money laundering officials. One seldom encounters just one cockroach.

Meanwhile at GXG Markets a wider upheaval is underway. Oddly enough, a lot of that upheaval has New Zealand connections, one way and another, though not necessarily to Odgers. There will be more on that in my next.