Why? High decline rates from shale reservoirs is given. The more interesting reasons are the compounding effects of pad drilling on rig count and poorer average well performance with time.

This means that production rates will fall at a much higher rate today than during previous periods of falling rig counts.

Most shale wells today are drilled from pads. One rig drills many wells from the same surface location, as shown in the diagram below 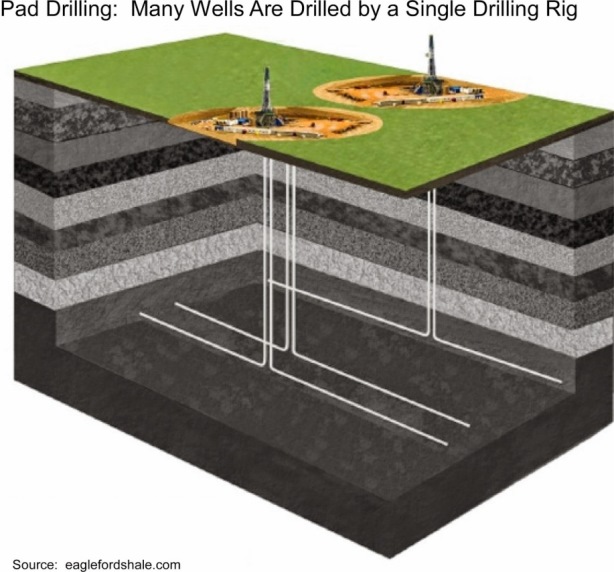 The Eagle Ford Shale play in South Texas is one of the major contributors to increased U.S. oil production. A few charts from the Eagle Ford play will demonstrate why I believe that the shale boom will fall sooner and more sharply than many analysts predict.

The first chart shows that the number of active drilling rigs (left-hand scale) in the Eagle Ford Shale play stabilized at approximately 200 rigs as pad drilling became common. The number of producing wells (lower scale), however, has continued to increase. This is because a single rig can drill many wells without taking the time to demobilize and remobilize. In other words, drilling has become more efficient as less time is needed to drill a greater number of wells. 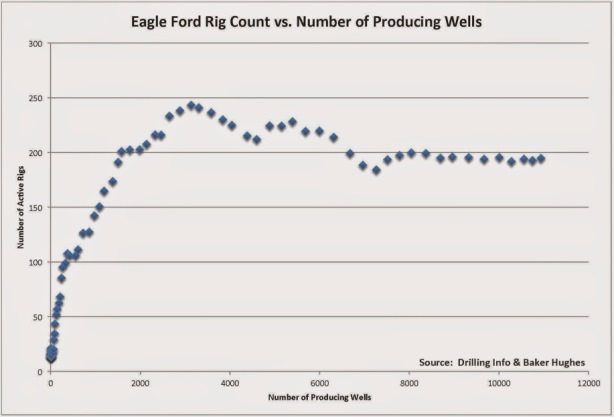 The next chart below shows Eagle Ford oil production, the number of producing wells and the number of active drilling rigs versus time.

This chart shows that production growth has not kept pace with the rate of increase in new producing wells since mid-2012. That is because the performance of newer wells is not as good as earlier wells. 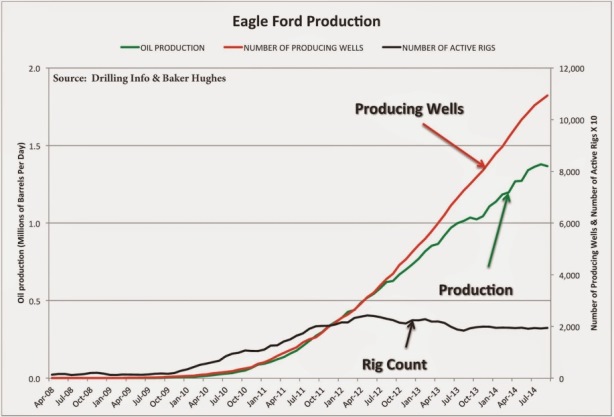 Average rig productivity has almost tripled since early 2012. Average well productivity has decreased by one-third over the same period. This means that every rig taken out of service today has more than three times the impact on daily production as before pad drilling became common.

Most experts do not anticipate any significant decrease in U.S. tight oil production in the first half of 2015. Their analyses may not have accounted for the effect of pad drilling and the decrease in average well productivity.

Using the Eagle Ford Shale as an example, U.S. oil production should fall sooner and more sharply than many anticipate. This will be a good thing for oil price recovery but maybe not such a good thing for the future profitability of the plays.