Yves here. I sometimes run posts from orthodox economic sites as exercise in critical thinking, or to remind readers of what passes for research in economics, since economic work is treated with undue reverence in policy circles.

Here, the issue at hand is why people who have well paid jobs take a while to land another one, of course assuming that they manage to land well. The analysis by the author is not bad, save its rather frightening level of abstraction. But take a good look at his summary of conventional assumptions about how job-finding and wage-setting for the unemployed is supposed to work.

There is simply not enough acknowledgement of the structure of work, that highly paid roles almost without exception involve highly specialized skills. If you cannot find someone who wants those particular skills, you then are forced to look for work that draws on your more general skills (selling, managing people, being a data jockey, manual labor) where you are less differentiated from other candidates and where the prevailing pay levels are lower. Studies like this also fail to consider that demand for these higher-paid jobs can drop for protracted periods of time. For instance, being a derrickhand in the late 1970s oil boom was one of the highest paid jobs in the US. A colleague with a college degree made more than I did as a new associate (with an MBA) at Goldman. When the oil market went splat, many of those jobs did too. Similarly, in the late 1980s, when the LBO boom stopped, employment in M&A contracted by 75% and did not fully recover for a good 5+ years. I’m sure readers can cite similar examples from other fields.

And this article fails to consider a new phenomenon: the vogue among employers for astonishingly narrow job specifications, as in a strong predisposition to hire only people who are doing virtually the same job at a highly similar company, and the usual bias towards stealing people who are currently employed from competitors rather than hiring the jobless.

Workers who suffer job displacement experience surprisingly large and persistent earnings losses. However, standard labour market models fail to explain such a phenomenon. This column explains the persistence of workers’ earnings losses by arguing that displaced workers face higher separation probabilities in new jobs, and take substantial time to find their ideal job. The framework also matches empirical findings on the shares of average earnings losses following displacement that are due to reduced employment and lower wages.

Displacements (e.g. layoffs) in the US affect many participants in the labour market. As an example, during the height of the Great Recession, around seven million workers with at least three years of tenure experienced a job loss due to layoff (Bureau of Labour Statistics 2010). In conjunction with this high incidence of displacement, there exists long and distinguished literature documenting large and persistent earnings losses associated with displacement (see, for example, Jacobson et al. 1993, and Davis and von Wachter 2011, henceforth DV). Although estimates differ, economists typically find that even 20 years after displacement, annual earnings are 10 to 20% below pre-displacement earnings.

Classical labour market theories fall woefully short in explaining this phenomenon as all workers receive the market-clearing wage, and there is no involuntary unemployment. This implies that displaced workers’ earnings should recover immediately. The standard workhorse model of frictional unemployment (Mortensen and Pissarides 1994) also implies small earnings losses as observed average job-finding rates in the US are high, and all workers receive identical wages when employed (DV). Furthermore, although DV show that a model that features cross-sectional wage dispersion (Burgess and Turon 2010) can produce nontrivial earnings losses, this framework cannot quantitatively account for the depth and persistence of observed displaced worker earnings losses. The literature sees the inconsequential nature of job loss in these models as a major shortcoming, hindering economists’ understanding of why high unemployment creates concern among policymakers.

My job market paper proposes a model in the spirit of Jovanovic’s (1979, 1984) matching model where workers displaced from relatively stable jobs take time to find similarly high-quality matches and encounter substantial risk of subsequent job loss following an initial displacement. These simple features can account for the vast majority of the depth and persistence of displaced worker earning losses (Krolikowski 2014).

As far as post-displacement employment goes, the framework captures the following intuition. Compared to their stable job prior to the job loss, workers might not be as well matched in their first job coming out of non-employment. This results in tentative new employment relationships that are subject to a high probability of ending quickly. This leads to workers’ ‘spinning their wheels’ for a few years as they face repeated separations into non-employment after the initial displacement. This serial correlation in separations coincides with previous empirical work, where multiple additional job losses are found to be an important part of the workers’ post-displacement experiences (Stevens 1997), and I document the same phenomenon using data from the Panel Study of Income Dynamics (PSID).

The second part of the explanation for protracted post-displacement earnings dynamics is the presence of match-specific human capital and on-the-job search. This means that workers randomly get outside employment offers while working, and can move to better paying jobs over time. These features of the model deliver a ‘job ladder’ whereby newly hired workers start out in jobs with relatively low wages and move up the wage distribution via search on the job. This concept prolongs earnings recovery after displacement as non-employed workers enter poor employment relationships and search for better matches while employed. 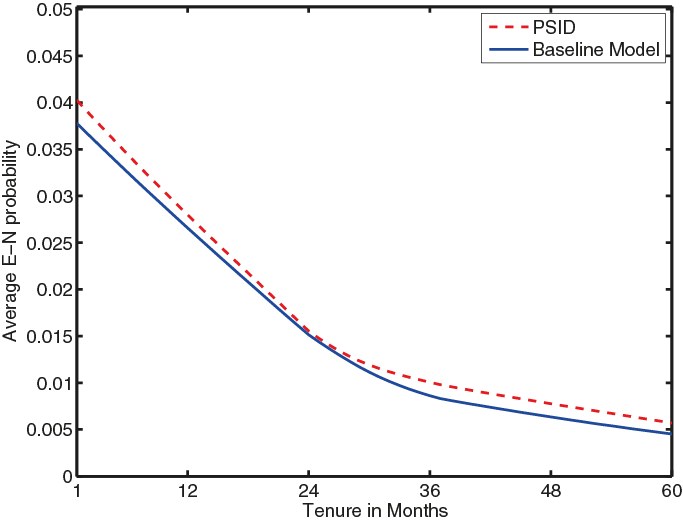 Figure 2 presents a comparison between the earnings of displaced workers from the baseline model and the results from DV. The outcome is very encouraging, with the baseline model delivering an earnings trajectory that closely resembles the empirical counterpart. 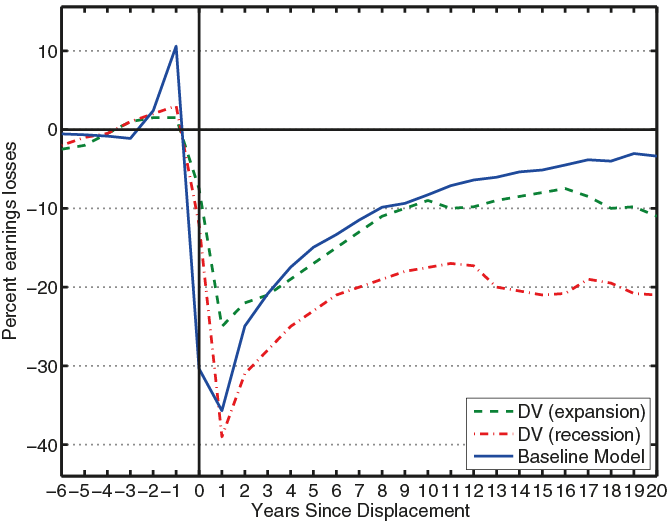 Aside from matching the earnings losses of displaced workers, the model accurately captures the decomposition of lost earnings into reduced employment and lower wages. In particular, on impact, the model predicts that the majority of earnings losses are because workers are out of employment. Much of the short-run recovery in earnings can be attributed to workers finding new jobs, while wages, through the job ladder, explain all the long-run earnings losses. This is entirely consistent with the available evidence on displaced workers (e.g. Topel 1990, and Bender et al. 2009). 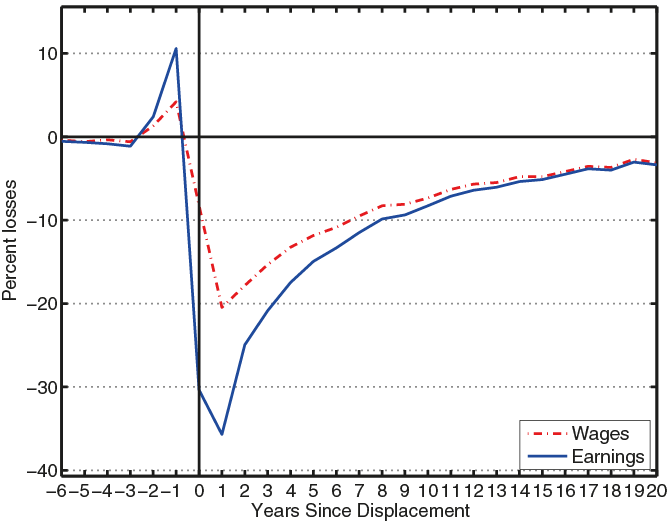 • Getting workers re-employed quickly to jump-start the process of finding a good match. This could be implemented using hiring tax credits or wage subsidies to stimulate the demand side, alongside traditional active labour market policies like disseminating vacancy information, and providing guidance with interviewing and writing quality CVs to buttress the supply side.

• Helping those out of work to find better matches coming out of non-employment. This suggests support for increasing unemployment insurance (UI) generosity, which should generate more stable post-separation employment (see Centeno 2004, for empirical evidence that greater UI generosity leads to longer job tenure).