a public row breaking out, right at the end of 2014, between the board of APGMI, who look respectable, and APGMI’s shareholders, who are London Capital Advisers, and want to kick out the entire board of APGMI.

The immediate and most bizarre consequence of the APGMI row is that someone, siding with the APGMI directors, puts up another APGMI web site, www.apgmi.co.uk, in competition with the pre-existing APGMI web site, registered by agents of London Capital, www.asiapacificgmi.com.

The two versions of the reality of APGMI propagated by these web sites diverge sharply.

That divergent trend continues. As of yesterday, the www.asiapacificgmi.com site is unchanged, while www.apgmi.co.uk has two new entries dated 11th February (click the thumbnail for a legible rendering): 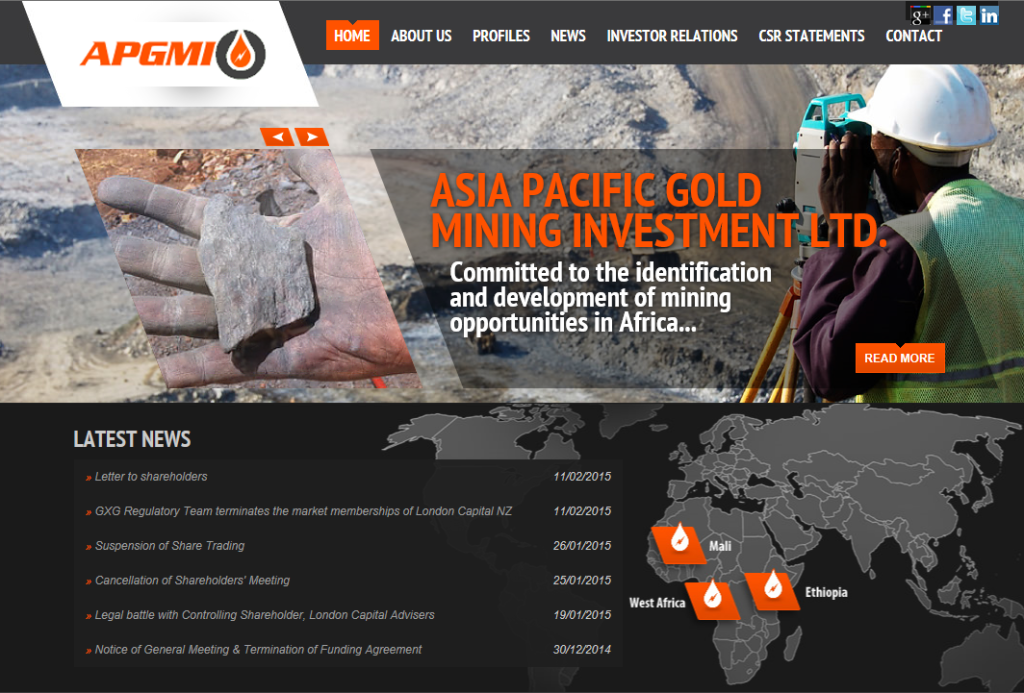 It so happens that bulletins from the rebel APGMI directors have a funny habit of disappearing from public web sites: two of their January press releases vanished from GXG, for instance. In the interests of finding out exactly who it is that is acting for the very dubious London Capital, it therefore seems sensible for Naked Capitalism to post the content of the “letter to shareholders”, and await, with great interest, a takedown request. The directors’ statement does seem to be entirely consistent with the public information that we have recorded in our posts so far, but perhaps some lawyer can find something wrong with it:

Directors Michael Cunningham, Philippe Cappelle and David Mapley provide the following statement, that is not the view of the full board of directors of APGMI.

We are very alarmed at the magnitude of investor losses in Asia and Middle East, and have shared our concern about the actions of the London Capital group and its officers, acting in concert across the above-mentioned 4 companies, with the relevant regulators and law enforcement bodies. London Capital NZ Limited had its market membership terminated recently by the GXG Regulatory Team. We understand that these 4 companies are only a few of various companies under investigation worldwide, but as directors of APGMI we feel duty-bound to help our shareholders where we can.

We expect to be removed as directors of APGMI on February 20th. by the majority, controlling shareholder of APGMI, namely London Capital Advisers, with sole director and shareholder Thomas Yi, whom we have directly questioned and challenged. Until that time, however, we feel duty bound to represent the best interest of APGMI and all its shareholders, whilst continuing to work closely with the authorities to bring those guilty of fraud and deception to justice in the near term. .

Well, as one guessed, these APGMI directors are going to go down all guns blazing. I can hardly believe they’re going to pack in the struggle after the 20th, either.

In an apparent indication of these directors’ good faith, their other new claim at www.apgmi.co.uk, that GXG Markets has terminated the market membership of London Capital(NZ), is verifiable and perfectly correct. Here is the GXG Markets statement in full:

In November 2014 the market surveillance of GXG Markets identified the involvement of London Capital NZ in several high profile cases.

London Capital NZ has been advisor for several companies which have been the subject of regulatory cases regarding severe and extensive noncompliance with GXGs market rules for the trading venues First Quote, Main Quote and Official List.

Due to the above mentioned the Regulatory Team has addressed the general suitability of London Capital NZ as a Corporate Advisor and as a Broker.

The submissions received on behalf of London Capital NZ in the regulatory investigation, do not, in the opinion of the GXG Regulatory Team, constitute new procedures or internal guidelines for London Capital NZ that reflects a higher compliance level in relation to ongoing advisory assignments.

Therefore the GXG Regulatory Team cannot consider London Capital NZ suitable as a GXG Corporate advisor, nor to participate in trading as a GXG Markets Broker.

London Capital NZ has failed to fulfill its obligations as a Corporate Advisor and as a Broker at GXG Markets.

On behalf of the GXG Regulatory Team

There are a few bits to pick out of this statement and its context.

First, lest you should think that the recent series of posts at Naked Capitalism had anything to do with this turn of events, it’s now obvious that GXG Markets have had London Capital (NZ) on their radar for a long time. There’s no chest beating in prospect, for this would-be exposing blogger, then.

Second, as of this writing, and unlike www.apgmi.co.uk, www.asiapacificgmi.com has absolutely nothing to say to its minority investors (largely folk who were sucked into the Virgin Gold scam and then spat out into APGMI), about the fact that APGMI has just lost its GXG broker and thus, its route to the market: 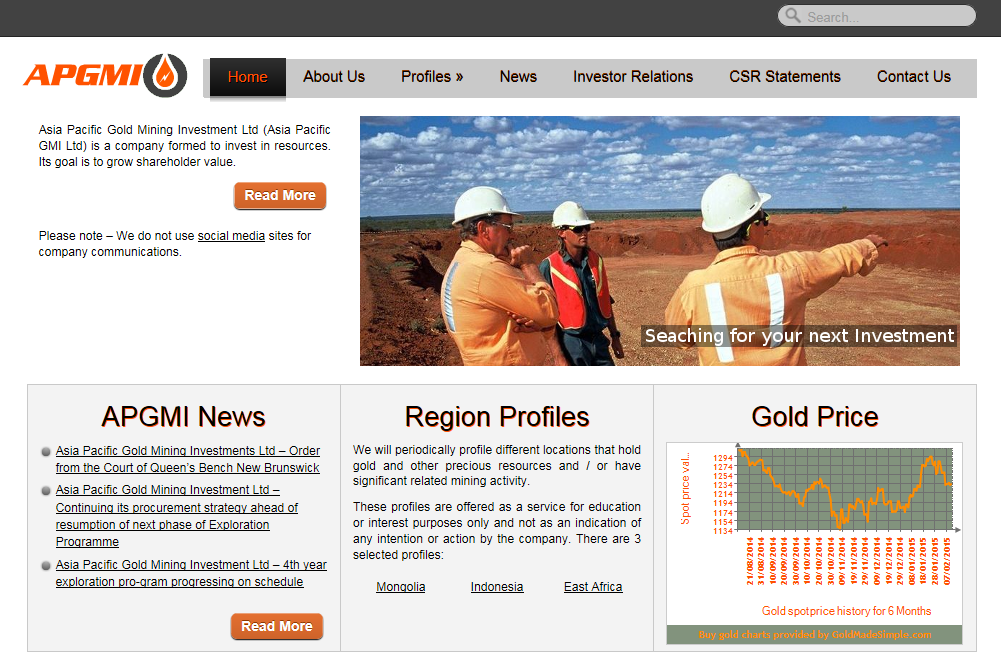 That omission could soon start to give the impression that the people behind www.asiapacificgmi.com really don’t care very much at all about keeping their investors apprised of the latest important developments in the APGMI story. Of course, the ~80% shareholder of APGMI is London Capital itself, in the form of London Capital Advisers, who must be well aware that they have just been shit-canned by GXG, but what about the other ~20%? Are they to be kept in the dark about this? One looks forward to a suitable news release at www.asiapacificgmi.com. A link to the GXG announcement of London Capital (NZ)’s expulsion from GXG Markets would do nicely.

Third, GXG offer a clear hint that there is yet more be found in the delisted stocks that now litter London Capital (NZ)’s past at GXG. This blogger is very happy to forego the opportunity for a bit of self-congratulation in return for that GXG steer. Is there yet more crazy stuff in GXG’s burgeoning archives of delisted stocks?

I think we’ll have to take a look when we can. It might be a good way to bridge any lulls in the developing London Capital story. That’s if there are any lulls; the newsflow over the next week might be quite brisk, as the rebel APGMI directors head noisily for the exit.