Lambert here: The fool in the shower with the solid gold Louis Quinze taps?

Many academic papers about the Great Recession in the US have focused on the boom-bust in housing wealth and how it affected spending of the middle class. But there are reasons to think that a large role was actually played by the rich, as they responded to developments in their overall wealth.

According to the traditional narrative, the rich play a role but as generators of ‘excess saving’ (Kumhof et al. 2013) and not as part of the spending boom-bust. In the 1980s, incomes of the high-saving rich soared, while those of the middle class stagnated. So the rich lent their ‘increased’ savings to the middle class, who used the funds to maintain their consumption growth (Rajan 2010) and speculate in real estate. Initially, all was well, as the real estate boom propelled a construction-based expansion. But by 2007, the music had stopped. The middle class became overextended and ceased buying houses, causing prices to collapse so sharply that many homeowners were plunged ‘underwater’ on their mortgages, owing more than their houses were worth. Some defaulted, while others rapidly increased their saving rates so they could pay down their debts (Mian and Sufi 2014). The result was a deep recession.

In a recent paper (Bakker and Felman 2014) we argue that:

Wealth Losses and the Great Recession

Figure 1. Household net worth and saving rate (% of disposable income)

Wealth effects also help explain why the housing market crash was so much more severe than the dotcom bust. Mian and Sufi (2014) have argued that housing assets are special. Acquisition of real estate, unlike purchases of financial assets, is largely funded by borrowing and this explains why the Great Recession was so much more severe than the dotcom bust, even though the housing market losses in the former were about the same as the stock market losses in the latter. A simpler explanation may be that the dotcom bust was mitigated by an increase in nonfinancial assets (mostly housing) while the housing market crash was exacerbated by the drop in financial assets (Figure 2), which actually accounted for  $8 trillion of the $13 trillion in peak-to-trough losses in wealth.

Figure 2. Change in assets, dotcom bust vs housing crash (Trillions of US dollars) 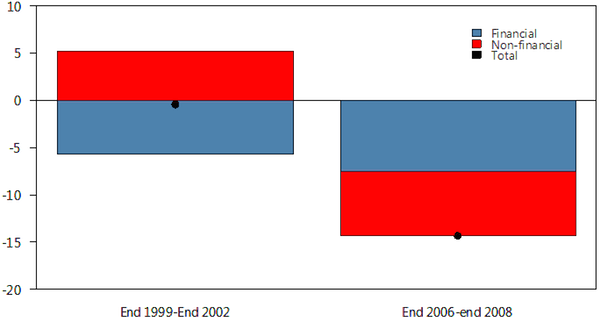 The Saving Rate of the Rich

However, data in the CEX are not consistent with the National Income and Product Accounts (NIPA). According to the CEX, the aggregate household saving rate increased before the Crisis, by a considerable amount. This is at odds with the NIPA data (Figure 3) which show that household saving rates plummeted before the Crisis, from 8.9% in 1992 to 2.5% in 2005. It is well-known in the literature that the CEX data underreport consumption, particularly among the well-off; and this underreporting has increased over time. As a result, the apparent rise in the saving rate may simply represent an increased underreporting of consumption. 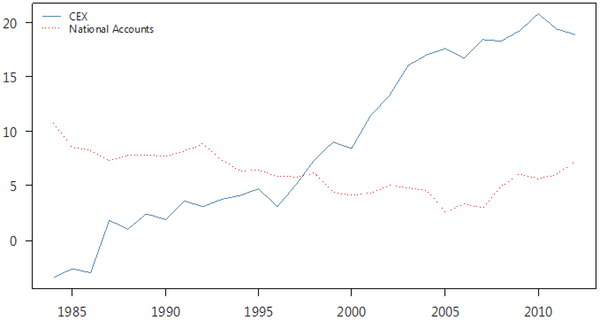 If we use the NIPA data we don’t have figures on saving by income class. But we can nonetheless figure out what must have happened to saving rates of the rich and the middle class. We have to explain why the aggregate household saving rate declined in the pre-crisis years, even as there was a shift in income distribution towards the (presumably) high-saving rich. The standard explanation is that the reduction in saving by the middle class outweighed the rise in the saving of the rich. 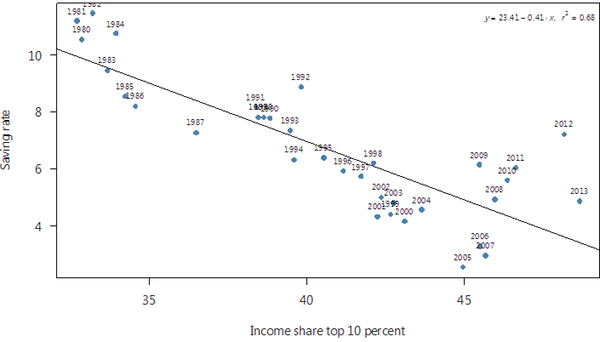 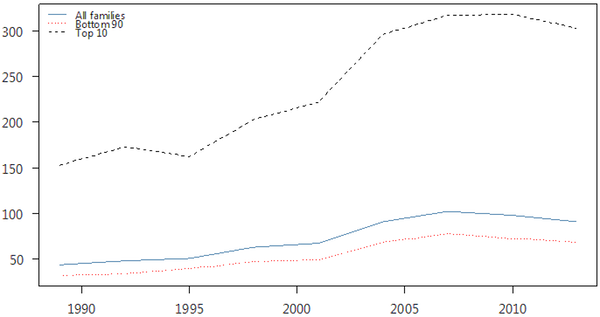 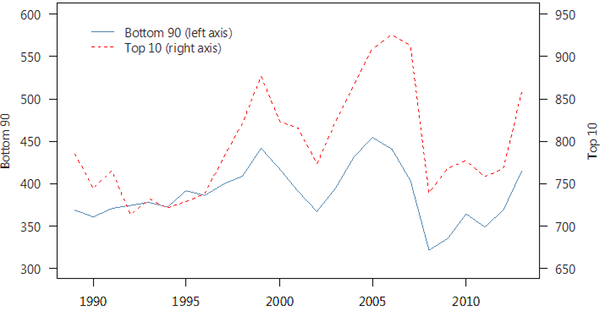 The Role of the Rich

If the saving rate of the rich followed the same cycle as that of the middle class, then the rich must have played a key role in driving the consumption boom-bust because they were the group that received the bulk of the income and wealth gains during this period (Figure 7).

To demonstrate this empirically, we use a consumption function that incorporates elements of both the inequality and the wealth narratives. In line with the inequality narrative, we assume that the marginal propensity to consume income for the rich is lower than that of the poor. At the same time, we assume that consumption also depends on wealth.

We estimate the model using annual data for the US for 1990-2013. The estimated model fits the data well, and the estimated parameters are broadly in line with the literature:

Next, we use the model to calculate the role of the rich in driving consumption. We would expect a significant role, simply because their income and wealth gains have been so much larger than those of the middle class.

The model suggests something truly striking. The top decile explains the bulk of overall consumption growth (Figure 8). Between 2003 and 2013, about 71% of the increase in consumption came from the rich. Much of the slowdown in consumption between 2006 and 2009 was the result of a drop in consumption of the rich. The rich also played a key role in the subsequent recovery.

Our results suggest that the standard narrative of the Great Recession may need to be adjusted. Housing played a role, but so did financial assets, which actually accounted for the bulk of the loss in wealth. The middle class played a role, but so did the rich. In fact, the rich now account for such a large share of the economy, and their wealth has become so large and volatile, that wealth effects on their consumption have started to have a significant impact on the macroeconomy. Indeed, the rich may have accounted for the bulk of the swings in aggregate consumption during the boom-bust.

Disclaimer: The views expressed in this blog are those of the authors and do not necessarily represent the views of the IMF, its Executive Board, or IMF management.