In our first post in this series, we introduced a vast Far Eastern pyramid fraud, Virgin Gold Mining Corporation (VGMC), that ran from early 2010 to mid 2013. There were, at the very least, many thousands of duped investors in Asia, and reputedly, billions of dollars were scammed. In May 2013, the followup scam, “Plan A”, turned into a fiasco when the intended vehicle, Asia(n) Gold Mining Asset(s) Corporation (AGMAC), a fake BVI-registered investment fund, was denounced by the BVI regulator.

In the second post in the series, we sketched the role of VG Resources and Nauer Corporate Service(s), “Plan B”, in operation roughly mid-to-end 2013. VG Resources was a supposed stock exchange listing (on GXG) for the (nonexistent) assets of VGMC. London-based Nauer Corporate Services purported to offer “Know Your Client” services supporting the upcoming GXG listing, but surprisingly, given that KYC processing is an FCA-regulated function, never registered with the FCA. In fact it appears that Nauer merely compiled the name, address and contact details of any duped VGMC investors gullible or desperate enough to undertake the round trip from Asia in the hope of salvaging their long-gone VGMC investment. Even after VG Resources announced the cancellation of its VGMC takeover plan, Nauer pressed on with this data collection exercise. There must be a “Plan C” on the way!

In the third post, we reached “Plan C”, Asia Pacific Gold Mining Investments (APGMI), a company registered in New Brunswick, Canada, and in operation early 2014 to right now. Like the defunct VG Resources, APGMI is a GXG-listed vehicle brokered by Asia Finance Corporation, trading as London Capital (NZ). We explored more links between APGMI, London Capital, VG Resources and Nauer Corporate Services, especially via the names Julie Cecilia Cook and Bryan Leonard Cook. We noticed a public row breaking out, right at the end of 2014, between the board of APGMI, who look respectable, and APGMI’s shareholders, who are London Capital Advisers, and want to kick out the entire board of APGMI.

The immediate and most bizarre consequence of the APGMI row is that someone, siding with the APGMI directors, puts up another APGMI web site, www.apgmi.co.uk, in competition with the pre-existing APGMI web site, registered by agents of London Capital, www.asiapacificgmi.com.

The two versions of the reality of APGMI propagated by these web sites diverge sharply. Here, for instance, is the www.apgmi.co.uk news page: 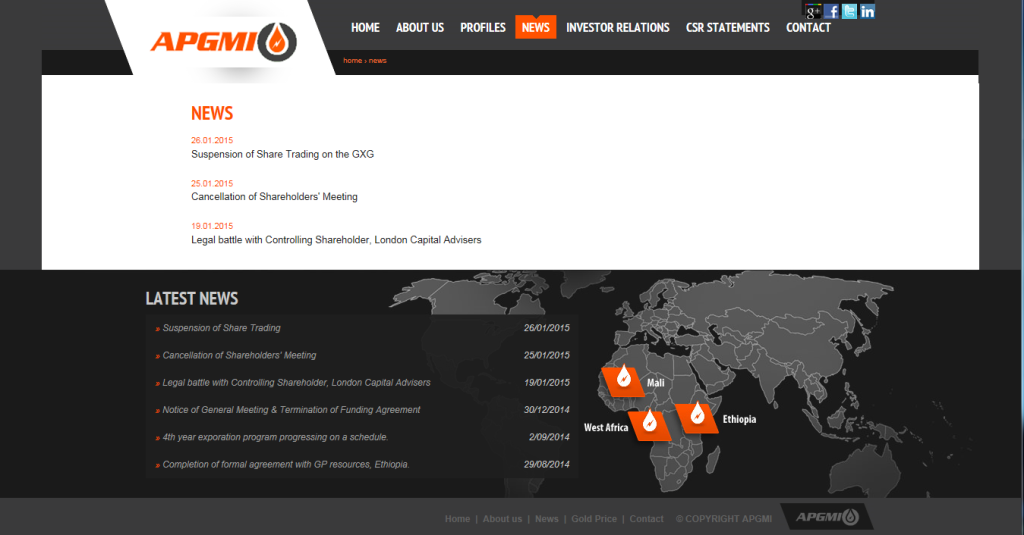 Now, obviously, fun though that is, it can’t go on. For the moment, a temporary resolution is given by a New Brunswick court judgment published at the London Capital site, that I have downloaded for your reading pleasure (Court-Order-no.2- , PDF).

With my bush lawyer hat on, I conclude that the board are going to have to fold on points 1,3 and 4, and may have part-folded already: the contentious press releases have vanished.

Point 2 might be a bit stickier. If the APGMI board were happy with the content of the releases when they were posted, then they are still happy with them now.  Mr Yi and his lawyers and the New Brunswick court may have gone too far there. The judgment impinges on issues of personal integrity in a whole new way. We will just have to see how that pans out.

I’d like now to point out a few other things that I’d hardly have nailed down so firmly if London Capital Advisers hadn’t gone to court, won, and published the judgment:

Thomas Ungchun Yi of London Capital Advisors, who turns up in many, many corporate registries alongside other London Capital people, including apparent stooges, is evidently a senior figure in the group, alongside Bryan Cook and Julie Cook.

Not that far away from New Brunswick, the principal of Integral Transfer Agency, James Stuart Adams, is currently in a bit of trouble with the Ontario Securities Commission, in connection with an alleged pump-and-dump stock fraud, A25 Gold Producers Corp. Previous digging at Naked Capitalism, in connection with unloved New Zealand ex-lawyer Cathy Odgers, has also unearthed a connection between Integral Transfer Agency, apparent GXG stock fraud HCI Hamilton (delisted amid official opprobrium since that NC post appeared) , and a $35Mn share boiler room operation that resulted in a $2Mn SEC fine.

With the aroma of stock price manipulation now permeating our nostrils, let us consider the balance sheet, P&L and market capitalisation of APGMI. Its latest accounts are from Dec 2013 and show what one ought to expect: an early-stage mining startup with assets of C$128,626 and a loss, for the period March 1st 2013 to December 31st 2013, of C$554,435.

Nevertheless, with 100Mn shares in issue and a share price, as at end 2013, of GBP2.33, APGMI’s market capitalisation when those accounts were published, was GBP233,000,000. That figure is based, according to GXG Markets’ trading history, on a single trade in just 100 shares, struck on July 15th 2013, and booked by London Capital, the only on-market APGMI share trade there had ever been at that time.

That would make Thomas Yi’s London Capital Advisers, the majority shareholder of APGMI (let us call that “80%”), worth a cool GBP190,000,000. Mind you, another trade in APGMI was booked in September 2014, shortly after David Mapley joined the board, for 500 shares, promptly halving Thomas Yi’s paper fortune. Perhaps Mr Mapley concluded that in finding a realistic price for APGMI, you’ve got to start somewhere. One glimpses an incentive for Mr Yi to nip Mr Mapley in the bud, and in public, if necessary, and to hell with Yi’s nervous colleagues.

Now, obviously, Mr Yi of London Capital Advisers cannot in fact dump 80,000,000 shares in tiny APGMI onto tiny GXG Markets, via his colleagues at London Capital (NZ), without recourse to a massive supply of on-market suckers, which presumably doesn’t exist at GXG. Even if he did, and stuffed them to the gills, London Capital would instantly attract plenty of attention from GXG Markets.

By way of illustration, a UK registered outfit, Waste4Power PLC, directed by Thomas Yi, attracted attention from stock market regulators in Germany in just this way, and was delisted by the Berlin Exchange at the end of 2012. Also  caught up in that purge were Yi’s Sejong Investments, Tornado Air PLC, Energie Future PLC, Alta Aerial PLC. Further related purgees included future adornments of London Capital NZ’s firmament of stars at GXG, such as Astra Resources, now delisted at GXG and the subject of an ASIC civil action alleging that Astra illegally raised more than AUD7,6Mn from Australian investors. Meanwhile GXG have recently (December 2014) delisted Yi’s London-Capital-brokered Global 6 Technologies, co-directed by one Chris Eddy, of Dubai, in order to ‘preserve an orderly market’.

No, after that Berlin experience, what the London Capital team needs is a massive supply of off-market suckers…

Courtesy of Nauer Corporate Services, they’ve got lots. It’s time, at last, to return to the long suffering Asian investors in VGMC, AGMAC and VG Resources who handed over their contact details to Nauer. It turns out that so many of them – thousands – trekked trustingly or desperately round the globe to Nauer’s then-offices in Mayfair, sometime June 2013, most likely , or a little later, that they blocked the street, causing furrowed brows for the local police, who feared a public order problem, as well as a traffic jam. This is what some Virgin Gold investors looked like, in happier days, before they were a threat to public order in Mayfair: 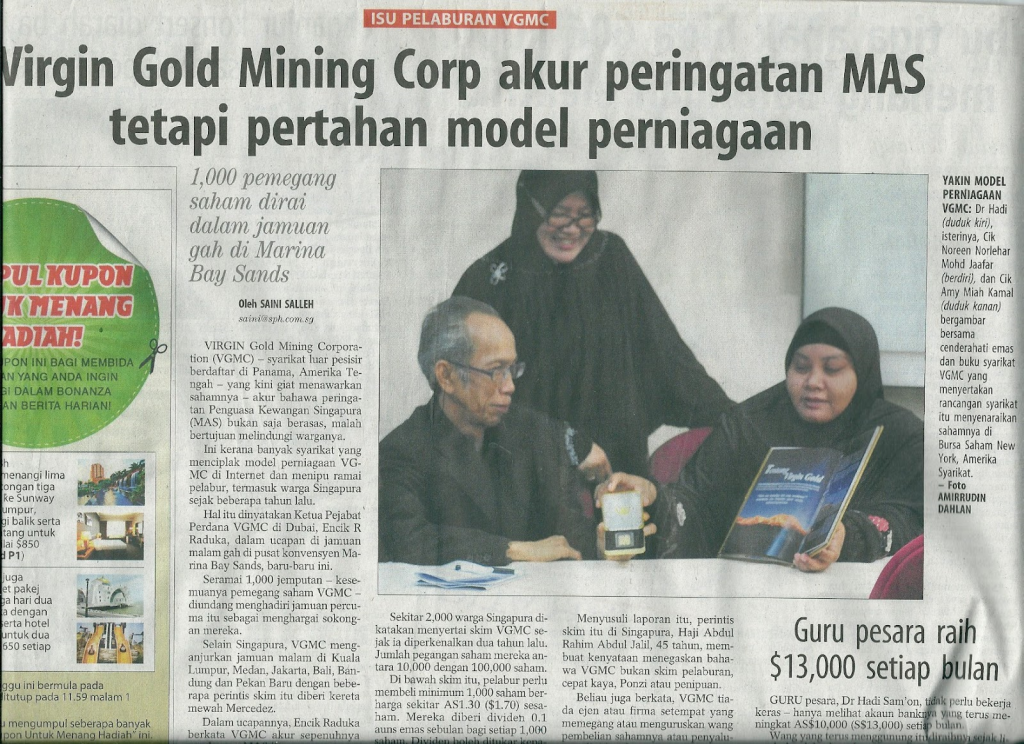 Some of those VGMC investors, up to a thousand, now own the 20% or so of APGMI no longer owned by Thomas Yi.

Here’s how they came to own those shares. First, they were contacted by a mysterious outfit called STPC who know all about APGMI and Asia Finance Corporation: 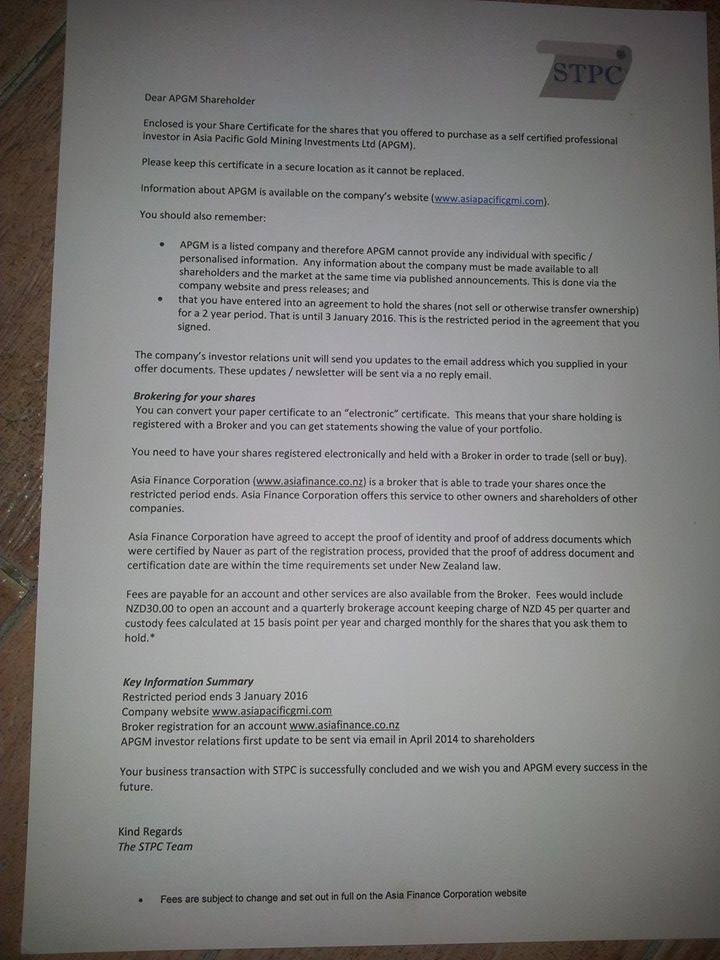 I shall leave it to finance professionals to juxtapose the double talk in that missive with the likely capacity of the self-certified professional investors, sampled in the Malaysian newspaper pic above, to see through it.

Tracing STPC looks challenging but turns out not to be completely impossible. Here is a screen shot from their perfunctory web site, www.stpcenter.biz, registered by proxy (ie, untraceably) in the usual Arizona desert hellhole, Scottsdale:

It guffs on and on, a crude piece of bamboozling, not expecting, nor likely, to be read, nor understood, until we get to the punchline, New Brunswick:

Next step: after a while, a pretty random subset of the ex-VGMC  and AGMAC (“Plan A”, post 1) investors who submitted their contact details to Nauer (“Plan B”, post 2), and any strays who went straight for APGMI, receive a share certificate in APGMI (“Plan C”, post 3). Along the way, many will have paid fees and commissions to Nauer Corporate Services.

Here’s one example amongst hundreds: 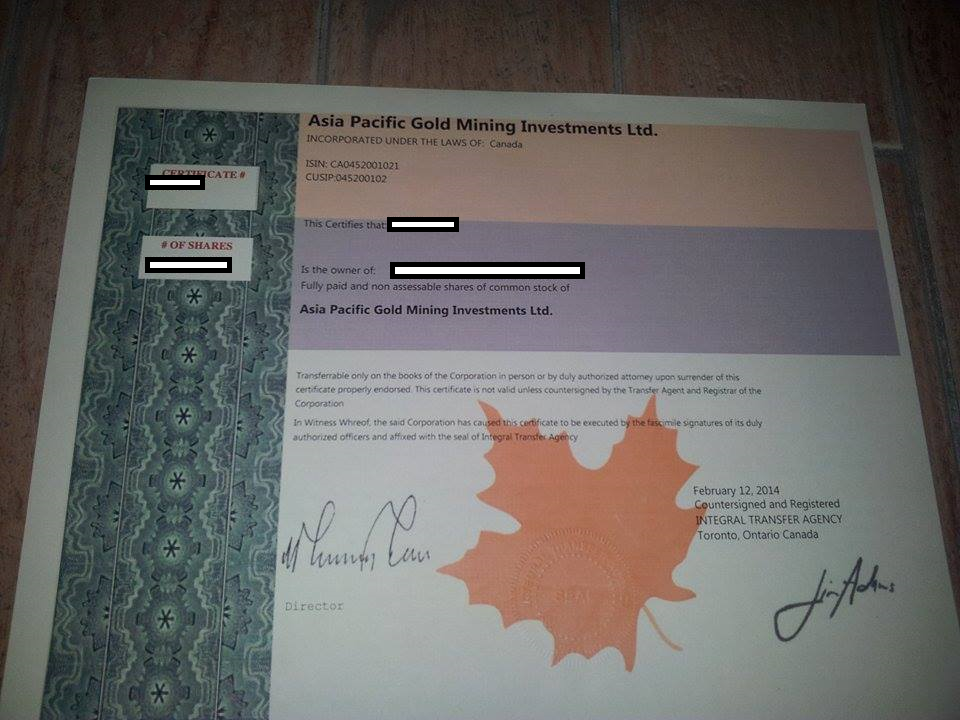 I have blotted out just the number of shares, the cert number, and the investor name.

As we see, untraceable STPC is the interface between London Capital, Integral Transfer Agency in the middle, and the APGMI share certificates that in early 2014, after the Nauer web site has disappeared, start flying out to one-time investors in VGMC, AGMAC and maybe (no sightings yet) VG Resources.

Compared with the lot of the tens of thousands of VGMC investors who have lost their entire investment, APGMI’s Asian shareholders must feel that the London trip, the KYC fees to Nauer, and the patience and worry, were all worth it in the end. They each own shares in APGMI, a listed security, worth a Canadian dollar (or two) each.

Except, of course, that, denuded of its serious directors, and with Yi at the controls, APGMI is heading for oblivion: delisting, dissolution. APGMI investors will never even see the few cents per share that APGMI is really worth right now.

If it doesn’t materialise in short order, I have some other crazy scams for you.