Without a lot of fanfare, average gasoline prices bottomed at the end of January and have been rising steadily ever since. They’re still a lot lower than they were a year ago, from $0.89 per gallon lower on the West Coast to $1.24 lower in New England, according to the EIA. But the turnaround has been swift. 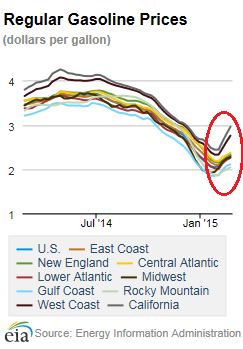 Numbers vary, depending on who is doing the counting. According to the AAA’s Daily Fuel Gauge Report, the average price for regular hit $2.312 today, up 1.1 cents from yesterday, and up 27.5 cents from a month ago. That’s a jump of 13.5%. But it isn’t evenly spread across the nation: the EIA found that gas prices in New York rose only 5% from the bottom; in Ohio, they soared 24%.

Gasoline prices tend to rise in late winter. But this time, months of plunging gas prices – a function of the collapsing price of oil – created good vibes that are suddenly being deflated.

Gallup developed its Economic Confidence Index in 2008 during the Financial Crisis. Not surprisingly, given what most consumers face, the weekly index has been deeply in the negative throughout its life. Well almost. In 2014, it still ranged from -14 to -21, despite other consumer confidence indices that were soaring. But late in the year, perhaps as the plunge in gasoline prices was doing its magic, it began to rise. And in late December, the index made it all the way into positive territory, for the first time ever – and inched up further in 2015.

Until now. For the week ending February 22, it fell 5 points to -2, the largest drop since July, and once again back in the negative. Gallup explains that the index is “usually fairly stable, not changing more than a couple of points unless there is some significant event.” 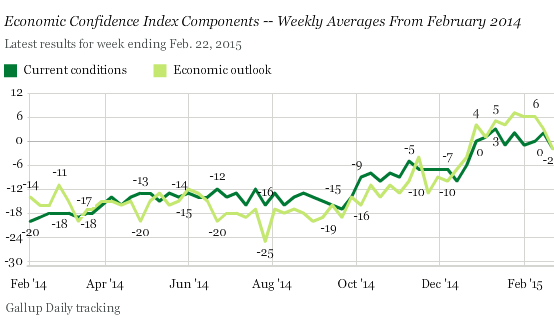 The index is composed of two components: “how Americans rate current economic conditions and whether they say the economy is getting better or getting worse.” This year, unlike prior years, the economic outlook index was consistently above the current conditions index, ranging in positive territory between +2 and +6. The current conditions index ranged between -1 and +1. Now both have dropped to -2. Over the past two weeks, the outlook index dropped from +6 to -2, down 8 points.

And the “significant event” that could have triggered the decline? Gallup explains:

Americans’ lower confidence in the economy last week is most likely a reaction to the rise in gas prices. Even though gas prices remain well below where they were a year ago, the recent increase has been fairly sharp – though perhaps less than the normal late winter increase – and the shift from declining to rising prices may simply be discouraging to consumers.

And so, “if gas prices continue to rise and the weather” – again, the weather – “ends up adversely affecting first quarter economic growth, economic confidence could struggle to get back into positive territory.”

And then that would be it for American consumers? After years of post-financial-crisis struggles, finally some light at the end of the tunnel and a few weeks of positive economic outlook in early 2015, caused by plunging gas prices, according to Gallup, before it all starts to crumble again.

The Gallup survey provides a much darker contrast to the Conference Board’s Consumer Confidence Index. It has been showing that consumers had regained their pre-crisis euphoric levels, as January’s confidence index hit the phenomenal level of 103.8, something last seen in 2007. But in February, consumers toned down their presumed euphoria. And the index, released today, dropped 7.4 points to 96.4. The report didn’t mention rising gasoline prices. So there may be other factors at work that dented  this Conference-Board defined consumer euphoria.

Peaking economic confidence – at whatever miserably low or euphorically high level these disparate surveys place it – would indeed be a crummy development, just when consumers were expected to borrow even more and spend even more to propel the economy once again to its ever elusive “escape velocity.”

There are already unpleasant rumblings. In Texas, one of the growth engines of the US economy in recent years, manufacturers saw new orders and shipments plunge to the “lowest reading since June 2009,” according to the Dallas Fed. And executives are getting worried. Read… Oil Bust Mauls Texas Manufacturers, Atlanta Fed Sees Hit to US Economy