Ringling Bros. to Give up Elephant Acts in 3 Years ABC News (furzy mouse)

The People Revolt Against Sledding Ban in Nation’s Capital Newsweek. EM: “9/11 … the gift that keeps on taking.”

The palace of Nimrud, the home of Ashurbanipal II is being destroyed France24 (Davie L) :-(

Banned BBC Documentary Nirbhaya India’s Daughter Full You Tube. Stephen M: “(This is the whole documentary. Not sure how long this will last as India has been pushing to get all uploads of this BBC documentary removed.”

Ban on Nirbhaya documentary: Let’s accept it, we are offended by our own ugliness DNA India (Stephen M)

Dollar-euro parity coming: Strategist CNBC. Reader Li predicted this a while ago….

ECB says willing to restore financing for Greek banks once deal is reached ekathimerini Translation: “once Greece agrees to pretty much all of the old structural reforms.”

Varoufakis: “We have Plan B” after ECB Draghi’s says No,No,No to liquidity Keep Talking Greece

Why do Russians still support Vladimir Putin?Where The “Neutral” OSCE Mission in Ukraine Blames The Wrong Side Moon of Alabama

How Has The Pentagon Shaped Innovation? Yale Insights

Attorney General Kamala D. Harris Announces 24 Year Prison Sentence For Leader of Mortgage Relief Scam (1SK) State of California Department of Justice. ““This predatory scheme robbed families of their life savings and in many cases, their homes.” Too bad this sort of reasoning and punishment isn’t applicable higher up the food chain.

Why global warming does not necessarily result in warmer wintersThe Economist

KKR in talks to settle SEC probe of expense sharing Chris Witowsky, PEHub. Note this is not the abuse publicized in the Wall Street Journal, involving KKR Capstone. This looks to be pure and simple bilking on breakup fees.

Neoliberal Utility and the Paradox of Taxation Ed Walker, emptywheel

Antidote du jour. From John B: “Here is my only male cat stretched out in my office on a Tibetan tiger rug. The cats like to lie on this rug probably because it is pretty plush. He does have little hidden tiger stripes in his fur (even though his name is The Lion because he looks like a little lion or as he is also known as Lover Boy because every woman that meets him wants to take him home). I some times say his fur has mystical symbols in it. He is a real sweety and an affection hog. He needs to be held several hours a day which makes it hard to get work done.” 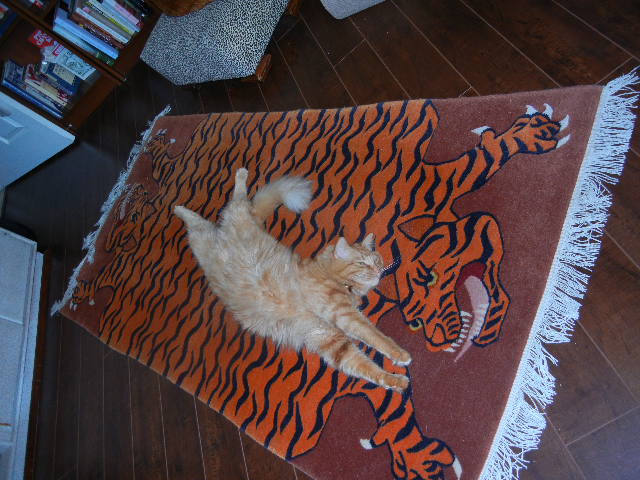