Yves here. As we pointed out early on in the oil price bust, following the argument of John Dizard of the Financial Times, shale gas operators, aka frackers, were often carrying so much debt that they simply could not afford to cut production. They’d keep pumping, even at a loss, to generate cash flow to keep servicing their obligations. Over-production would tail off only when the money sources dried up.

As we’ve since chronicled, even though rig counts have fallen, shale gas production has actually increases. Arthur Berman provides a detailed look at tight oil and shale gas output, and confirms that the rig count cuts for shale gas have not been deep enough.

Investors should pay attention to this growing problem. Bank of America fears sub-$2 gas prices now that winter heating worries are over. Low natural gas prices affect the economics for gas-rich oil production in the Eagle Ford Shale and Permian basin plays as well as for the shale gas plays.

The rig count for shale gas plays has decreased by only half as much as for the tight oil plays. The reason appears to be that most shale gas companies do not have significant positions in the tight oil plays and must continue to drill to maintain production levels.
Shale gas rig counts have dropped only 19% for horizontal rigs and 25% for all rigs from 2014 highs. The corresponding decrease for tight oil plays is 41% and 46%, respectively, as shown in the table below.

This has puzzled me because the shale gas plays are not commercial at less than about $6/mmBtu except in small parts of the Marcellus core areas where $4 prices break even. Natural gas prices have averaged less than $3/mmBtu for the first quarter of 2015 and are currently at their lowest levels in more than 2 years. 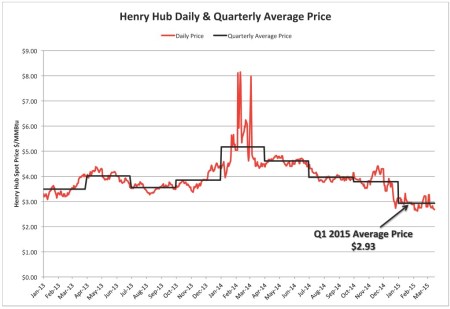 Most shale gas producers either do not have positions in the tight oil plays or are strongly gas-weighted in their production mix. These companies must continue to drill in shale gas plays despite poor economics in order to avoid the consequences of falling production levels.

The only criterion that seems to matter to investors these days is production guidance. If production drops, stock value will fall even farther than it has already. This will trigger loan covenants if asset values fall below thresholds set out in the loan agreements. When that happens, the loans will be called unless the companies can come up with more cash. This might result in bankruptcy. So, the drilling must continue as long as there is capital.

The table below shows the companies that have overlapping positions in both tight oil and shale gas plays based on current drilling activity.

Current rig counts for companies with positions in both tight oil and shale gas plays. Source: DrillingInfo and Labyrinth Consulting Services, Inc. Rig counts may differ from Baker Hughes because the source is different.  (Click Image To Enlarge)

All companies in the table except Continental Resources are gas-weighted so maintaining gas production levels is important to them for the same reasons it is important to operators without tight oil exposure. Overall, the companies in the table operate only about one-third of all rigs in the shale gas plays. Shale gas is otherwise characterized by a different set of companies that feel they have no choice but to continue drilling and hope that investors don’t notice or care. 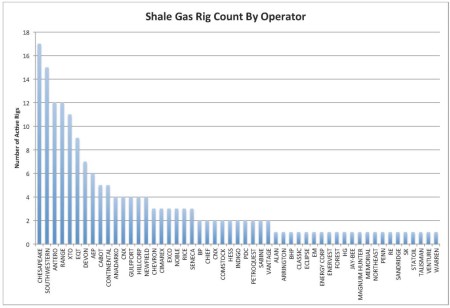 But don’t oil-weighted companies face the same concerns about production levels?
I compared the change in rig count from January to March 2015 by operators in the Eagle Ford Shale play to understand how rig counts are being reduced. I found that key operators were strategically reducing their activity to the best locations in core areas in order to affect production levels the least (see chart below). 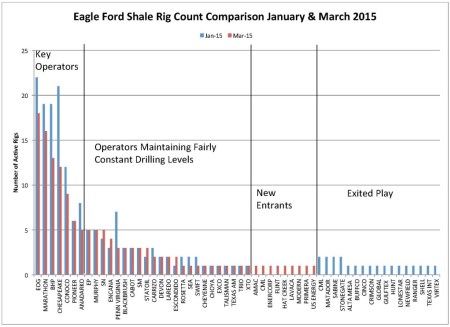 The next most active class of operators are holding drilling fairly constant in this most productive of tight oil plays. Then, there are a small number of new entrants to the play that are more than balanced by operators exiting the play. My previous post on Eagle Ford well performance showed that there are ample locations in the most commercial parts of the core areas for well-positioned operators to optimize production with fewer new wells.

It is worth noting that the top group of operators in the Eagle Ford Shale play have reasonably good balance sheets (see the table in my previous post) and are not particularly vulnerable to loan covenant threshold triggers. This cannot be said for many of the top operators in the shale gas plays shown in the table below. 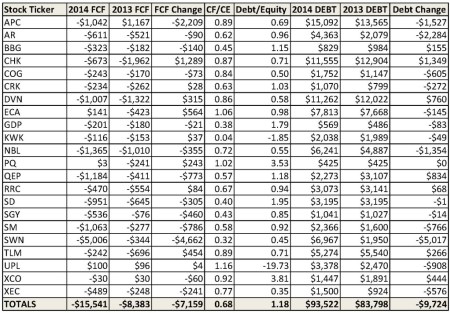 The table shows financial data through year-end 2014. What it reveals is not pretty. 2014 negative cash flow reached $15.5 billion, an increase of $7.2 billion over 2013. Much of this increase involved Southwestern Energy’s puzzling acquisition of Chesapeake’s West Virginia Marcellus Shale position that increased that company’s negative cash flow by almost $5 billion over 2013.

On average, shale-gas companies earned only 68 cents for every dollar that they spent in 2014. Total debt increased almost $10 billion to $93.5 billion and average debt exceeded stated equity by 18% excluding companies with negative equity including the now-bankrupt Quicksilver Resources.

Shale gas plays are commercial failures. The misuse of capital to continue to increase production while destroying price and shareholder equity has gone on for too long. Investors should demand that shale gas companies cut rig counts at least as much as tight oil companies have.

Rig counts are important today because they may indicate future trends for oil prices. Horizontal wells in the Bakken, Eagle Ford and Permian basin plays produced about 3.5 million barrels of crude oil per day in November 2014 (see table below). These are, therefore, the key plays to watch for rig count decreases. 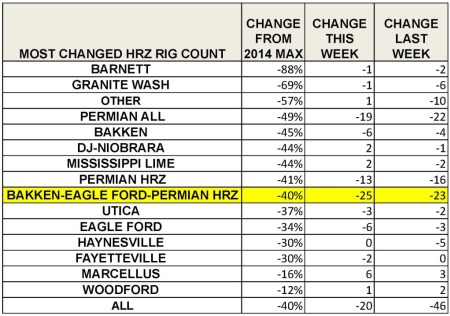 The plays with the greatest change from their respective 2014 maximum rig counts may be viewed as the least commercially attractive to producers. This suggests that the Barnett, Granite Wash, and Permian All are the least attractive.

It is interesting that the Bakken moved into this category this week. Well head prices in the Bakken have now fallen below $30 per barrel. The play is geologically solid but wells are expensive, the pay-out times are fairly long because relatively low decline rates for a shale play, and rail transport adds a lot to the cost of each barrel of oil.

The overall U.S. rig count for the week ending March 20, 2015 was 1,069 of which 1,030 were land rigs. Only about 25% of total land rigs and 11% of horizontal rigs are drilling outside of the major shale gas and tight oil plays. Detailed data for all of the plays are shown in the table below.

This and other data continues to suggest decreasing U.S. tight oil production and increasing world demand. Rig count continues to fall for the critical oil-producing plays and that means that things are on track for an oil-price recovery sooner than later.

Investors should carefully examine why shale gas players have not reduced rig counts more. Continued drilling in the Marcellus will crush natural gas prices further. The fact that there are 34 rigs running in the Haynesville Shale is economically baffling. We may only speculate on why there are 51 rigs in the Woodford Shale and why some operators now call it the SCOOP play