“Under the proposed schedule, [Hatch and Wyden] would introduce the trade promotion authority bill on April 13, the day lawmakers return from their two-week recess” [National Journal]. “Hatch expressed worry as late as last week that if he and Wyden couldn’t strike a deal in April the fast-track bill might not get passed at all this year.” Be sure to visit your Congress critter’s office and share your views. If possible, put together a group across the political spectrum, which TPP’s anti-sovereignty ISDS provisions should make easy to do. And see Vatch’s handy contact list here.

“Wyden is balking at the Republican’s basic fast-track proposal, asking for enhanced reviewing authority to ensure that trade deals comply with agreed-upon TPA objectives” [National Journal]. Looks like cover. Surely the ISDS so-called courts could undo any of this?

“If 60 House Republicans defect from leadership on trade, the administration would have to win support from at least 32 House Democrats, well over twice the number now thought to support fast track” [Wall Street Journal].

Anti-TPP group Fight for the Future has been following Sen. Ron Wyden around Eastern Oregon in March with a 30-foot blimp reading “Ron Wyden: It’s Up To You. Don’t Betray Us!” [The World].

“Due to the vague language of the TPP’s copyright provisions, big content groups could attack any of the TPP countries’ interpretation of the copyright provisions, especially if they were more protective of users’ rights. A multinational movie studio could sue a country that introduces new rules, like those that Chile already has, requiring a judicial order before someone can be forced to remove content from a website” [EFF]. If you want to see a living example of fair use and how important it is, check any NC article with block quotes.

Even if you accept the theory of comparative advantage, TPP is a bad deal on pharma [CEPR].

White House Petition: Make public the entire Trans-Pacific Partnership trade pact before allowing our US representative to agree to its terms [WhiteHouse.gov]. Not many signatures yet.

Letter to the editor: “You wouldn’t buy a car behind a curtain without examining it so why pass a bill that is so secret we can’t know what is in it? A pig in a poke is what you’ll get” [East Oregonian].

Phillipines will not join TPP talks, although it will participate in ASEAN free trade negotiations for the Regional Comprehensive Economic Partnership [Xinhua].

Scott Walker really did (probably, if he had a coupon) buy a sweater for a dollar at Kohl’s [Journal-Sentinel].

Walker tells conservative talk show he’d cancel any Iran deal, whether our trading partners wanted to or not [WaPo].

Walker tells another conservative talk show “that people around the country protesting Indiana’s religious freedom law are ‘looking for ways to be upset about things'” [Journal-Sentinel].

Pew Research: 2016 campaign “has gotten off to a slow start with voters” [McClatchy]. “Fifty-eight percent said they’ve given at least some thought to potential candidates, but that’s 10 percentage points below this point in 2008.” Maybe if it wasn’t shaping up to be a dynastic contest?

Karl Rove: The Mittster didn’t lose because “the base” (my quotes) stayed home, but because “fewer self-identified moderates, 1.7 million fewer white Catholics, and 1.2 million fewer women” did [Karl Rove, Ph’nglui mglw’nafh Cthulhu R’lyeh wgah’nagl fhtagn!]. I grant the whiff of R’lyeh, but nobody ever said Rove wasn’t very, very good at what he does.

69 percent of Republicans prefer a candidate who doesn’t pledge not to raise taxes [WaPo]. Nice knowin’ ya, Grover.

Nacil Buper, Grand Priestess of the Temple of Night, took time out of her busy schedule to meet with me. I asked her what she thought about the rumors of imminent catastrophe. … “That’s the most outrageous kind of nonsense,” the Grand Priestess replied. “Atlanteans have been worshipping the Lord of Evil for more than a century and a half. It’s one of the foundations of our society and our way of life, and we should be increasing the number of offerings to Mu-Elortep as rapidly as we can, not listening to crazies from the fringe who insist that there’s something wrong with slaughtering people for the greater glory of the Lord of Evil.”

Read the whole thing; the part about Tarc Omed, Hierophant of the Priests of the Sun, is fun, too.

“How Schumer Rose To The Top” [The Hill].

Schumer built the foundation of his clout by chairing the Democratic Senatorial Campaign Committee in 2006 and 2008. He exceeded expectations in both cycles, first by picking up six GOP seats to capture the Senate majority and then netting another eight to put his party on the cusp of a 60-seat filibuster-proof majority. 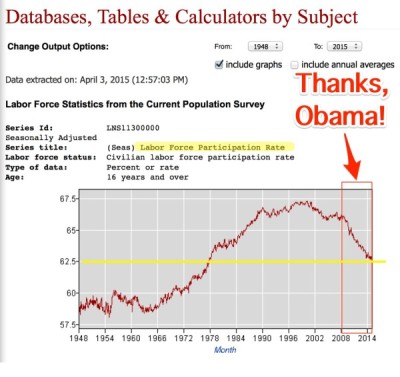 “The weak March report is a reminder that although the economy is improving, it’s still struggling to climb back from the Great Recession” [McClatchy]. No. This is the new normal.

“It now appears that soft numbers so far in 2015 on consumer spending, durable goods orders and industrial activity were telling us something meaningful, and while the job market still looks quite solid over all, it probably isn’t going quite as gangbusters as it had seemed” [New York Times]. And by “seem,” we mean “made to seem,” right?

“Standing in front of the offices of the $26 billion investment firm Citadel, the challenger accused the firm’s billionaire owner, Kenneth C. Griffin, of benefiting from a relationship with the mayor” [New York Times]. Good.

The rise of DIY dentistry in the UK [Guardian]. Now that’s what I call skin in the game! What next? Brain surgery?

“A man initially charged in a 2012 double homicide is suing 13 detectives in the Chicago Police Department, alleging they falsified police reports, coerced a witness and withheld information that would have proven his innocence before he spent nearly two years in custody” [WLS]. Wait, the CPD?!

Two LAPD officers who fatally shot Steven Eugene Washington, an autistic, unarmed man in 2010 were awarded a total of nearly $4 million last week in a discrimination lawsuit that accused the department of treating them unfairly because they are Latino [HuffPo]. Says their lawyer: Doing “what they were trained to do.” Well, er.

Readers, feel free to contact me with (a) links, and even better (b) sources I should curate regularly, and (c) to find out how to send me images of plants. Vegetables are fine! Fungi are deemed to be honorary plants! See the previous Water Cooler (with plant) here. And here’s today’s plant, the fourth of “I Wish It Were Spring!” week three (craazyman): It’s always a very hopeful moment to look up at the trees and see branches — with buds — against the sky.