Fruity! How ‘transgender’ avocado trees change their sex overnight in a matter of hours Daily Mail

QE may not have been worth the costs FT

Treasury Flash Crash of October 15, 2014 Still Has Wall Street in a Sweat Wall Street on Parade

Crisis Chronicles: The Panic of 1825 and the Most Fantastic Financial Swindle of All Time Liberty Street Economics. “Of all time”? Really?

Buiter on the death of cash FT Alphaville

50 Reasons We Cannot Afford the TPP Eyes on Trade. 50 for the 50 states. Use to write your Congress Critters!

Does the U.S. pay too high a cost for free trade in the TPP pact? Reuters

Why the Trans-Pacific Partnership Matters NYT

GE to Cash Out of Banking Business WSJ

LAID LOW: THE IMF, THE EUROZONE AND THE FIRST RESCUE OF GREECE (PDF) Paul Blustein, CIGI

Argentine court orders arrest of Justin Bieber The Telegraph. And high time, too.

The New Deal New York Review of Books. With Iran.

How much student testing is too much? McClatchy

The Unlikely Paths of Grant and Lee Slate

The War Nerd: The Confederates who should’ve been hanged Pando Daily

Army Recruit Charged With Helping ISIS Watched by FBI, Given Clearance by Army The Intercept

Spotting lies, and the lying liars who layer them FT Alphaville

How to Beat a Polygraph Test NYT

How the U.S. spends more helping its citizens than other rich countries, but gets way less WaPo

How Robots & Algorithms Are Taking Over New York Review of Books

Comrades, The Lannisters Have No More Gold! Paul Mason

The Burden of Denial The Archdruid Report

Antidote du jour, and thanks to reader Bunny for suggesting the Lady and the Unicorn tapestry at the Musée de Cluny. (I couldn’t bear to crop out a single animal, so here’s the entire thing.) 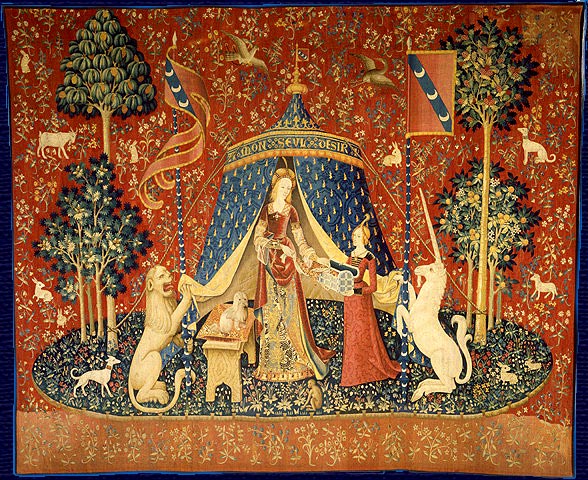