Yves here. Notice how Arthur Berman links overproduction of expensive oil and shale gas to access to cheap financing. In other words, the shale gas boom and bust in in large measure a by-product of ZIRP and QE.

The present oil price collapse is because of over-production of expensive tight oil. The collapse occurred because of the inability of the world market to support the cost of the new expensive oil supply from shale, oil sands and deep water. Demand was progressively destroyed during the longest period of sustained high oil prices in history from 2010 through 2014.

Since the early 2000s, the price of oil was largely insensitive to the fundamentals of supply and demand as long as prices were less than about $90 per barrel. The chart below shows world liquids supply minus demand (relative supply surplus or deficit), and WTI oil price. 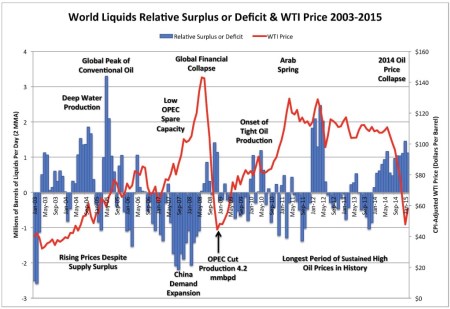 In mid-2004 and mid-2005, the relative supply surplus was much greater than it has been during the 2014-2015 price collapse yet prices continued to rise. When oil traders perceive supply limits and rising prices, price below some critical threshold is not an issue. They are willing to carry the cost of storage and interest to hold the commodity in the future when it will be more valuable. 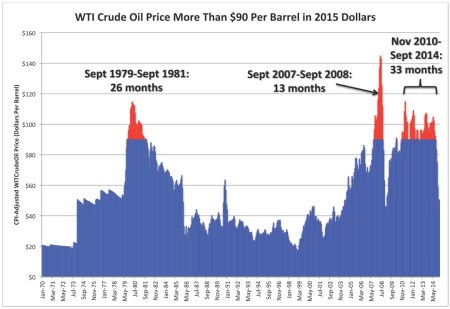 In 1979, the trigger for oil-price increase was the Iranian Revolution and the Iran-Iraq war. More than 6 million barrels of oil were removed from world supply. Oil prices rose from $50 to $115 per barrel (in real 2015 dollars) between January 1979 and April 1981. Then, new production from the North Sea, Mexico, Alaska and Siberia flooded the market. By March 1986, prices had fallen to $27 per barrel. OPEC cut production by 14 million barrels per day but oil price was unaffected because of a combination of demand destruction, crippling interest rates, and new supply from non-OPEC countries. Prices did not begin to recover until 2001.

So far, the current oil-price collapse is nothing like this. Surplus production is about 1.0 to 1.5 million barrels per day, interest rates are near zero, and demand recovery appears strong from early data.

The oil-price collapse and Financial Crisis of 2008 were preceded by 11 consecutive months of relative supply deficit and price increase (Figure 1 above). This was largely because of a surge of consumption by China and low OPEC spare capacity. Oil prices approached $150 per barrel in June 2008, the highest price ever reached, and then collapsed below $40 by February 2009.

The record price of oil was an underlying cause of The Financial Crisis. It increased the cost of global trade, produced inflation and higher interest rates that contributed to real estate loan defaults, and caused demand destruction for oil and other commodities.

Weak demand for all commodities and loans remains a chronic artifact of the years since 2008 despite the best efforts of central banks to correct the problem.

Oil prices rebounded fairly quickly after 2008 because of a 4.2 million barrel per day production cut by OPEC in January 2009 (Figure 1). Another reason for increasing oil price was the devaluation of the U.S. dollar by the Federal Reserve Board by lowering interest rates and increasing the money supply. The chart below shows Federal Funds interest rates and the price of oil. 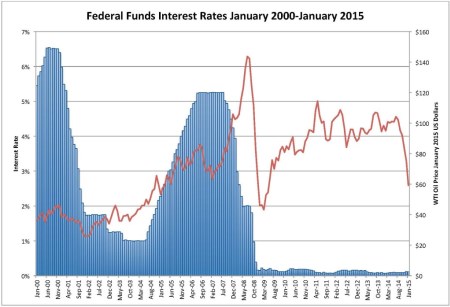 Oil prices rose with a weak U.S. dollar and interest rates near zero in 2009. Other factors, notably the Arab Spring uprisings in the Middle East, also contributed to the price increase.

As prices passed $80 per barrel in late 2009, tight oil production began in earnest. Low interest rates forced investors to look for yields better than they could find in U.S. Treasury bonds or conventional savings instruments. Money flowed to U.S. E&P companies through high-yield corporate (“junk”) bonds, loans, joint ventures and share offerings. Although risk was a concern, these were investments in the United States that were theoretically backed by hard assets of oil and gas in the ground.

In the first half of 2012, flagging demand caused a relative supply surplus of 3.5 million barrels per day (Figure 1 above). WTI oil prices dropped below $90 but by early 2013, prices returned to the high $90-to-low-$100 per barrel range. 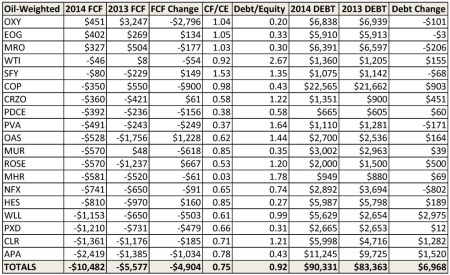 These companies out-spent cash flow by 25%, spending $1.25 for every $1.00 earned from operations. Only 3 companies–OXY, EOG and Marathon–had positive free cash flow. Total debt increased from $83.4 to $90.3 billion from 2013 to 2014. Debt must be continually re-financed on increasingly poorer terms because it can never be repaid from cash flow by many of these companies.

The U.S. E&P business has, in effect, become financialized: investment in this class of company has become the sub-prime derivative of the post-Financial Crisis period. There is no performance requirement by investors other than the implicit need to maintain net asset values above debt covenant trigger thresholds.

These terrible financial results reflect a year when average WTI oil prices were more than $93 per barrel. First quarter 2015 earnings will make these results look good.

The immediate cause of the present oil price collapse is found in increasing production and, to a less obvious extent, decreasing demand that began in January 2014 as shown in the chart below. Markets react slowly and it was not until June 2014 that prices began to fall.

This was the manifestation of longer-term demand destruction following nearly 3 years of oil prices above $90. The chart below shows the same world liquids data as in Figure 1 but with demand (consumption) expressed as a percentage of supply (production). 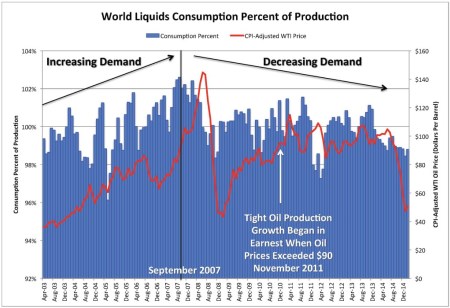 Figure 5 shows that demand as a percent of supply was generally increasing until about September 2007 and has been generally decreasing since then. Especially weak demand since early 2014 is merely the most extreme expression of a trend that has been active for more than 7 years.

The present oil-price collapse is, therefore, because of long-term high oil-price fatigue. It reached a crescendo in mid-2008 when oil prices exceeded $140 per barrel but was not specifically recognized as more than another of the factors that contributed to the Financial Collapse that followed. It is now clear that oil price was a central cause of that collapse.

The artificial low interest rates that have been imposed by central banks since the Collapse have weakened the U.S. dollar and pushed the price of oil above $90 per barrel for the longest period in history.

The quest for yields in a low interest rate world led investment banks to direct capital to U.S. E&P companies. Capital flowed in unprecedented volumes with no performance expectation other than payment of the coupon attached to that investment. Tight oil boomed despite poor financial performance.

The current oil-price collapse is because of expensive tight and other unconventional oil and the market’s inability to support its cost. $90 per barrel WTI price appears to be the empirical threshold for demand destruction. Only the best parts of core areas of the Bakken and Eagle Ford shale plays make some profit at $90 per barrel and almost nothing makes money at present oil prices.

Low price will eventually cure weak demand. At the same time, the effect of reduced oil and gas spending on the U.S. economy is unclear but a weaker economy could lower demand despite low prices. Allen Brooks and Euan Mearns have explained the case for demand destruction in excellent detail.

The present oil-price collapse is severe because of the accumulated, long-term price fatigue that has existed since late 2007. Although the immediate cause of the collapse is over-production of tight oil, the key to recovery is demand.

Demand is more difficult to cure than over-supply so that is where efforts must be directed. Over-production of non-commercial tight oil must slow and eventually stop before the market can balance itself. I am more optimistic than most that this is already underway but it distresses me to see increased capital flow thus far in 2015 to what Christopher Helman aptly calls “zombie” companies.

The problem is structural and systemic and firmly rooted in the irresponsible funding of under-performing U.S. tight oil companies since at least 2010. The first step to price recovery is the severing of capital supply to companies that could not fund their operations from cash flow when oil prices were more than $90 per barrel. If this does not happen, we could be in for a long period of low oil prices.

*The Brent crude oil pricing system did not exist before 1987.