By Richard D. Wolff. Wolff is Professor of Economics Emeritus, University of Massachusetts, Amherst where he taught economics from 1973 to 2008. He is currently a Visiting Professor in the Graduate Program in International Affairs of the New School University, New York City. He also teaches classes regularly at the Brecht Forum in Manhattan. Earlier he taught economics at Yale University (1967-1969) and at the City College of the City University of New York (1969-1973). In 1994, he was a Visiting Professor of Economics at the University of Paris (France), I (Sorbonne). His work is available at rdwolff.com and at democracyatwork.info. 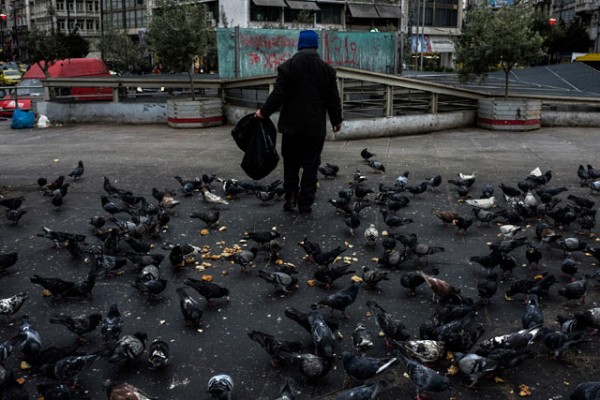 A man feeds pigeons in central Athens, Greece, February 9, 2015. Leading German politicians saw the “bailout of Greece” as an opportunity to serve their big-bank supporters with a second but indirect bailout that was disguised as “for Greece.” (Photo: Angelos Tzortzinis/The New York Times)

As economic crises, declines and dislocations increasingly hurt or threaten people around the globe, they provoke questions. How are we to understand the forces that produced the 2008 crisis, the crisis itself, with its quick bailouts and stimulus programs, and now the debts, austerity policies and deepening economic inequalities that do not go away? Economies this troubled force people to think and react. Some resign themselves to “hard times” as if they were natural events. Some pursue individual strategies trying to escape the troubles. Some mobilize to fight whoever they blame for it all. Many are drawn to scapegoating, usually encouraged by politicians and parties seeking electoral advantages.

Leading German politicians saw the “bailout of Greece” as an opportunity to serve their big-bank supporters.

For example, Germany’s recent history has featured reduced wages (especially via increasing part-time jobs), fewer social welfare protections, major bank bailouts in the crisis of 2008, rising inequality of income and wealth, austerity policies and so on. Its leaders around Merkel have responded by carefully rescripting their recent financial maneuvers as “Europe’s bailout of Greece” in a classic exercise in scapegoat economics. Three institutions (the “troika” of the European Central Bank, the European Commission and the International Monetary Fund) lent the Greek government money since 2010. Those loans were used chiefly to pay off the Greek government’s accumulated debts to private European banks (including especially German, French and Greek banks). The “bailout of Greece” was thus really an indirect bailout of those private banks.

Without that indirect bailout, those private banks would have suffered the usual losses that come when banks make loans that cannot be repaid. Those losses would have been costly for shareholders in those banks. The major shareholders among them include some of Germany’s richest and biggest capitalists. With their usual political power, they might have gotten the German government to bail them out directly again (since the German government had already done that directly a few years earlier in the 2008/2009 crisis). But such a second direct bank bailout would have been wildly unpopular with German voters and therefore politically dangerous for Germany’s top politicians.

Leading German politicians saw the “bailout of Greece” as an opportunity to serve their big-bank supporters with a second but indirect bailout that was disguised as “for Greece.” This gambit protected their political careers from voters’ wrath while getting all of Europe to share the cost of loans to Greece. German leaders then took the lead in insisting loudly that Greeks pay dearly for Europe’s loans. Merkel imposed a crushing austerity regime – with the cooperation of Greece’s two mainstream political parties – that shifted massive resources away from Greece’s public services for use instead to secure interest on and repayment of the troika’s loans.

The opportunism of German leaders was also an exercise in scapegoat economics. German bankers and political leaders – supported by many other European leaders – distracted and deflected their own people’s resentments over growing economic problems. Instead of popular anger turning against German, French and other European bankers, capitalists, their political servant and the capitalist system itself, it was redirected against Greece and Greeks. German media dutifully led the way in recasting the European loans to Greece (that ended up mostly in private European big banks) as supports for “lazy, overpaid and over-pensioned” Greeks that were unfair and costly burdens for hardworking German and other European taxpayers.

By means of this heavily staged public “Greek” drama, Germany added international economic scapegoating to the domestic scapegoating already widespread in Europe. It had repeatedly targeted communities of immigrants. Typically, the immigrants first arrived to provide employers (who often encouraged immigration) with lower-paid workers and thus higher profits. Then when the inevitable next capitalist business-cycle downturn arrived, the resulting discontent of unemployed and recession-burdened people was deflected and turned against immigrants. They were blamed as if they “took away jobs” from nonimmigrants rather than unemployment being the periodic burden, for immigrants and nonimmigrants alike, imposed by the profit-driven, fundamentally unstable capitalist system.

The United States has repeatedly displayed the same blame game with immigrants and with ethnic minorities. In the wake of the crisis since 2007, it is extending domestic scapegoating to still others. Governors in the US now increasingly attack state employees, their unions and pensions as if they, rather than the crisis, had suddenly become the economic problem. Mayors across the country do the same to municipal workers. Of course, both state and municipal budget problems since 2007 are primarily the results of high unemployment and reduced consumer spending. In short, it was and remains the crisis since 2007 that played and plays the key role in cutting governments’ tax revenues and hurting government budgets. Growing and more effective tax-evasion strategies of business and the rich have had the same effect. Responding to lowered tax collections, politicians fearful of damage to their careers refuse to raise tax rates. Instead they embrace spending cuts that they justify by means of scapegoat economics.

Thus they demonize public employees as lazy, greedy, overpaid, underworked, over-pensioned, etc. – all remarkably similar to German depictions of Greeks. Governors practice scapegoat economics by promising to protect “the public” from tax increases by “not pandering to” public employees and their unions, by “reining in” their pensions, etc. Those politicians act as if public employees and their pensions were suddenly the problem rather than a dysfunctional economic system. They similarly miss the stark reality of the dysfunctional political system they operate: It cuts government help to people in economic crises just when they need it most. Instead, US political leaders, like their German counterparts, use scapegoat economics to justify their selective spending cuts.

Scapegoat economics this time also serves capitalism’s global relocation. For decades, existing factories, offices and stores have been moving from old capitalist growth centers (western Europe, north America, and Japan) to new centers (China, India, Brazil, etc.). Similarly, enterprises are growing more in the new rather than the old centers. Headquarters sometimes remain in the old centers even as enterprise facilities locate elsewhere. Jet travel, computers and telecommunications make all this manageable. The capitalist competition that impels this relocation also means that the old centers lose many well-paid occupations with ample benefits and job security. Workers in places like Germany and the US are increasingly forced to settle for lower-paid, insecure jobs with fewer benefits. While jobs and wages grow more quickly in the new centers, wages there remain so low that huge profits reinforce capitalism’s global relocation.

As capitalists relocate, populations everywhere must adjust to and accommodate all the usually attendant frictions, sufferings and costs. In the old centers, unemployment and lower-paid jobs undermine governments’ tax revenues. Given resistance to tax increases, governments turn increasingly to expenditure cuts in their accommodation to capitalism’s relocation. This often worsens unemployment and wage rates. More importantly it further depresses mass standards of living. Consumption, household finances and relationships, marriage and career decisions: All are caught up painfully in the adjustment process. The same applies, likely more traumatically, to capitalism’s new centers. There, formerly agricultural and rural people are transformed quickly into industrial and urban populations living in extremely overcrowded and poorly provisioned slums.

A new politics organized around scapegoat economics appeals to voters by promising to “protect” them from austerity policies.

Capitalism’s relocation is socially disruptive in yet another basic way. It deepens economic inequality at both poles. Profits rise and wages stagnate in the old centers. Employers distribute the rising profits chiefly to shareholders and top executives and secondarily to upper management and professionals helping them operate corporations. An often spectacular growth in income and wealth inequalities afflicts the old centers. In the new centers, arriving capital needs and makes partnerships with local capitalists and government officials. The latter become extremely wealthy more quickly than local wages rise, and so inequalities of wealth and income deepen in the new centers too.

The gains and losses of relocating capitalism are very unequally distributed in both its old and new centers. This only aggravates the social tensions already emerging from the many adjustments and accommodations people are forced to make. Suffering from personal, financial and community losses, individuals and groups often feel betrayed by “their” political and economic organizations. In the US, for example, many working people believe that the Democratic Party and labor unions had promised to “protect” them but failed to do so, especially in the crisis and debt-funded bailouts since 2007. They have come to fear that now they will be required to absorb the costs of dealing with those debts by being subjected to austerity policies while “others” get protected from those policies. Feeling betrayed or abandoned by their traditional political representatives, many become susceptible to a new politics organized around scapegoat economics.

As exemplified by new Republican governors in the upper mid-West sensing electoral opportunity, this politics appeals to voters by promising to “protect” them from austerity policies (in the US, unlike Europe, “austerity” is not the name used). This means, first and foremost, that voters will be spared tax increases. These are demonized as always and necessarily “bad” economics for everyone. But the Republican Governors now go further and promise to protect voters also from spending cuts by making sure that those cuts focus on “others.” Enter scapegoat economics. The governors find “others” to be scapegoated in response to crisis-driven and capitalist relocation-driven declines in tax revenues. First of all, those others are – you guessed it – the traditional targets: those on welfare, in inner cities, immigrants, etc. The often-racist overtones of such appeals are only too well known. Nowadays, the second set of those “others” has come to include public employees, their unions, salaries, pensions, etc. To secure their careers, politicians promise voters to protect them by cutting government spending on both sets of scapegoated others.

When it works, such politics sets one part of the population suffering from capitalist relocation, crisis and austerity policy against another part. This permits big banks, large corporations and the rich, who own and direct them – those with the most responsibility for causing the crisis – to escape paying for it. They escape in part because their wealth and power made sure that they benefited first and most from the government bailouts in 2008 to 2010. They also escape because scapegoat economics enables them and their political friends to shift the burden of paying for the crisis onto certain of its victims while “protecting” other victims from further victimization. Perhaps capitalism inherited scapegoat economics from prior economic systems, but capitalism’s crises keep renewing that ugly injustice.

Copyright, Truthout. May not be reprinted without permission.