Pro-slavery Republican Paul Ryan to join forces with pro-slavery Democrat Obama to remove the Mendendez anti-trafficking provision from Fast Track, through language in a customs bill that will come to the floor after Fast Track does [HuffPo, and kudos to HuffPo for their TPP coverage]. It’s bipartisan. So that’s alright, then. And nice work on the “cooling saucer” thing, dudes.

“The TPP is nothing but an effort by the globalists to circumvent American sovereignty” [Dick Morris, The Hill]. “The long-term goal of the globalists is an international rule of law unaccompanied by democracy.”

“Here’s how much corporations paid US senators to fast-track the TPP bill” [Guardian]. Not very much, either!

Guide from EFF on how to set up a meeting with your representative [Electronic Frontier Foundation]. Do it!

“‘Today, with your support and the support of millions of people throughout this country, we begin a political revolution to transform our country economically, politically, socially and environmentally,’ the U.S. senator from Vermont told supporters in Burlington.” [McClatchy].

“Bernie Sanders: Hillary Clinton’s money ‘hustle’ could isolate her from reality” [Yahoo]. Or involve her intimately with it.

The newly released financial files on Bill and Hillary Rodham Clinton’s growing fortune omit a company with no apparent employees or assets that the former president has legally used to provide consulting and other services, but which demonstrates the complexity of the family’s finances.

Because the company, WJC, LLC, has no financial assets, Hillary Clinton’s campaign was not obligated to report its existence in her recent financial disclosure report, officials with Bill Clinton’s private office and the Clinton campaign said.

The officials, who spoke on condition of anonymity because they were not authorized to provide private details of the former president’s finances on the record, said the entity was a ‘pass-through’ company designed to channel payments to the former president.

I suggest “A pass-through entity for every American!” as a plank in the newly populist Clinton’s platform.

Julian Castro auditions for role as Hillary’s veep? [WaPo]. Corey Booker’s not in the photograph. He must be very unhappy.

“Lindsey Graham Knows the ‘Iranians Are Lying’ Because His Parents Owned a Pool Room” [Bloomberg]. Graham’s just running for the book deal and the shouting head gig.

“How the Money Primary Is Undermining Voting Rights” [The Nation].

How to deal with so many candidates [Political Wire]. Too many choices cause depression….

“Woman Gets 3 1/2 Years In Prison For Running Over Her Husband For Not Voting For Romney” [The Viral Vault].

It’s becoming cooler to call yourself a liberal [WaPo].

“Understanding the unthinkable post-2015 cuts”  [Wonkhe]. U.K. voted for austerity and now they’re going to get it. Hard.

Why DOJ police reforms fall short [Vox]. Not possible. I mean, this is Obama we’re talking about.

“More Than 20 U.S. Cities Are Currently Under a DOJ Consent Decree, But Do They Really Work?” [Blue Nation Review].

“Major End Of Session Legislation In Limbo Because Preet Bharara Is In Senate GOP’s Heads” [The Albany Project]. Including rent control, which might expire. So, life’s little ironies, Bharara anti-corruption campaign may have the (unintended?) effect of giving a sloppy wet kiss to New York real estate interests, who could kick thousands of not-so-rich New Yorkers out of their homes so they can make a quick buck selling luxury apartments to Saudi and Russian squillionaires, who then leave them vacant and don’t even bother to turn on the lights, because markets.

IRS chief on FIFA bribery scandal: “[T]he World Cup of fraud” [WaPo]. Oh, really? The Swiss have banks, I understand. As does the United States. And the U.K. #JustSaying.

“Qatar Is Treating Its World Cup Workers Like Slaves: Nepal Earthquake Edition” [Mother Jones]. 4,000 deaths seems like rather a lot of dead labor to condense into a stadium. #JustSaying.

“Statement: FIFA is fully cooperating as injured party in the actions by Swiss authorities” [FIFA].

“Rain was in the forecast, but not 162 billion gallons of it” [Houston Chronicle]. Federal assistance no doubt on the way to the Republic of Texas.

“Roughly 75% of the cattle in San Luis Obispo County have been sold or taken out of state over the last four years to escape conditions in the most drought-stricken region in California” [Los Angeles Times]. Meat should be a condiment anyhow.

Drought-policy expert Linda Botterill of the University of Canberra: “We can expect longer, deeper and more severe droughts in Australia, and I believe the same applies in the U.S. As a result, we need to develop strategies that are not knee-jerk responses, but that are planned risk-management strategies” [US News].

“The [Los Angeles Municipal Water District will boost its turf-replacement budget by $350 million for one year, but will also change certain terms and conditions of the extremely popular program. The district voted to cap the total reimbursement for residential customers at $6,000, paying $2 per square foot of lawn removed.” [Los Angeles Times]. The photo caption says the money goes to “plant drought-resistant plants,” which would be great. If the money goes to (petroleum-based) Astroturf, because freedom, that would be awful. Readers?

A drought watch has been declared in 27 northeast and central Pennsylvania counties after low groundwater and surface water levels have been identified [Patriot-News].

“At a maid-training center on Jakarta’s outskirts, dozens of women on floor mats listen intently to an instructor talking about how to manage money” [Wall Street Journal, “Indonesia Trains Migrant Workers to Make Most of Their Earnings”].

“Toronto Real Estate Is So Preposterous People Are Protesting Condos That ‘Only’ Cost $500K’ [Buzzfeed].

Readers, feel free to contact me with (a) links, and even better (b) sources I should curate regularly, and (c) to find out how to send me images of plants. Vegetables are fine! Fungi are deemed to be honorary plants! See the previous Water Cooler (with plant) here. And here’s today’s plant, the third of Gardens, Week Four: 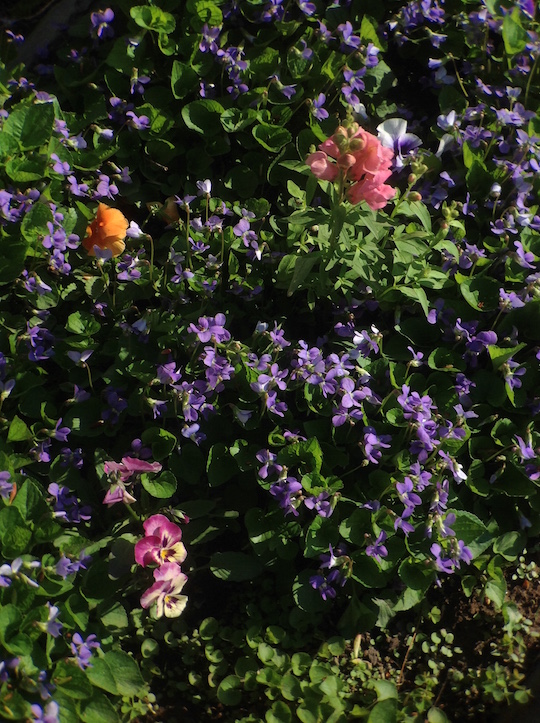